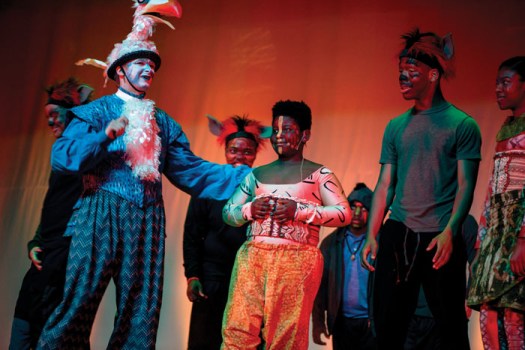 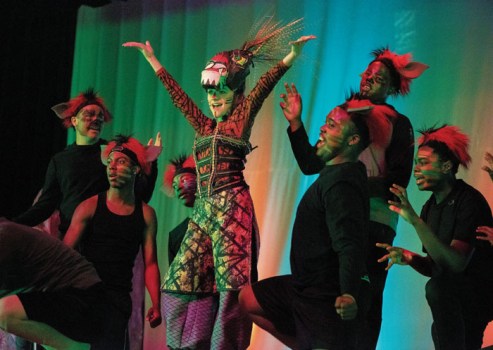 Mallory Braun plays the part of Scar in a scene with the hyenas. Jon C. Lakey/Salisbury Post 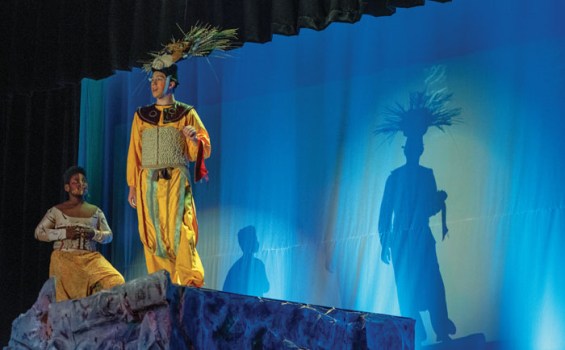 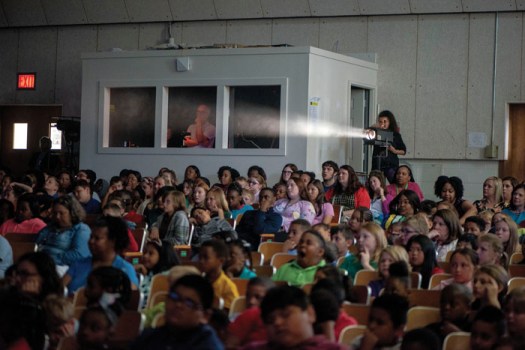 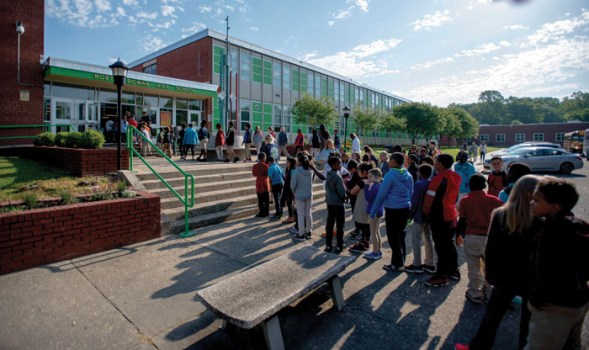 SPENCER — Students in North Rowan High School’s theater program may have moved on from last year’s rendition of “The Wiz,” but the school’s auditorium is still full of lions, tigers and bears.

And zebras. And gazelles. And antelopes. And birds. And elephants.

There’s a little bit of it all, with lions taking center stage during a production of “The Lion King Jr.”

The play is a collaboration among North Rowan High and Overton, North Rowan and Isenberg Elementary schools, putting on the stage the treasured story of young lion prince Simba and his journey of self-discovery.

Students began their production Tuesday with a preview performance for students from North Rowan and Hanford Dole elementary schools. The show will continue through Saturday with nightly performances at 7:30.

Tickets are available through the front office at $5 for adults and $3 for students.

A great portion of the costuming, said drama instructor and director Leigh Ann Alexander, was crafted with assistance from North Rowan High’s apparel class, led by Sheila Weidner. Making costumes began early in the school year after a visit from David “D.W.” Withrow, a Broadway costumer.

“We brought as many kids in to work with him as we could so they could have that experience,” said Alexander.

Following Withrow’s guidance and using studies of African fabric, colors and tribal symbols, students worked to finish crafting the pieces: African dresses for a group of lionesses, wispy skirts for an ensemble-portrayed African plain and more.

But the work of North Rowan costumers and set designers extended beyond what could simply be worn. The memorable “Lion King” song “Circle of Life” includes a processional with handcrafted puppets, each a collection of fabric, paper or paper mache. Almost 100% of the material is recycled, said Alexander.

There are leaping gazelles, fluttering birds, long-legged giraffes and two nearly life-size elephants. One of the two requires five students to assist in its operation, a microscopic example of the show’s many moving parts.

“Luckily I have some fabulous students and I have a fabulous administrative staff,” Alexander said.

“The Lion King Jr.” is the third show since the rebirth of a theater program in the North Rowan community. The operation began two years ago with a production of “Aladdin” using North Rowan Middle School seventh graders.

Students were bussed from the middle school to the high school for one class period a day, as the former lacks a stage.

“They did a great job, and this is our second year for high school students,” said Alexander.

The show features many returning cast members from “The Wiz”: Quentyn Cole as Simba, Garrett Jennings as Mufasa, Cora Lashua as Timon, Mallory Braun as Scar, Hannah Wilkersoon as Nala and Domaneke Morris as Sarabi.

This is Jennings’ second role as a lion, as he starred as the Lion in last year’s show.

It’s an experience that seems to prove him well in his role as father to young Simba, played by fourth-grader Malik Miller.

Cole called the production a “really fun experience,” saying he learned a lot from his involvement.

Braun said the production was stressful at some points, but “once it comes together, it’s all worth it.”

“I’m really glad we’ve got a theater class now, because we need it,  you know?” she said. “People don’t really think that. They just want us to learn math and science, and, yeah, that’s important, too, but so are music and theater.”