Syndergaard does it all in Mets’ win over the Reds 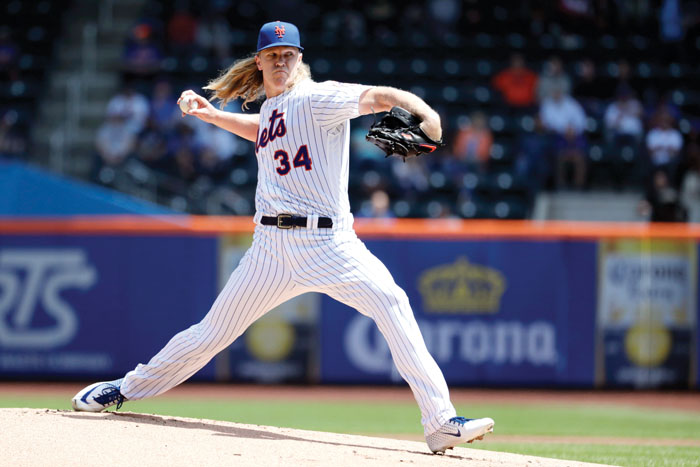 NEW YORK (AP) — Noah Syndergaard became the first pitcher in 36 years to homer and throw a shutout in a 1-0 victory, lifting the New York Mets over the Cincinnati Reds on Thursday.

Syndergaard (2-3) struck out 10 and allowed four hits in his third career complete game, shaking off a sloppy start to the season with a do-it-all effort. He became the first Mets starter to get an out in the eighth this season, and the franchise’s first starter ever to go yard in a 1-0 complete-game win.

Thor did his hammering in the third inning, driving a ball 407 feet to the opposite field in left-center off Tyler Mahle (0-4).

The previous pitcher to homer in a 1-0 complete-game win was the Los Angeles Dodgers’ Bob Welch against the Reds on June 17, 1983, according to the Elias Sports Bureau.

WASHINGTON (AP) — Stephen Strasburg reached 1,500 strikeouts in fewer innings than any pitcher in major league history, and Washington beat St. Louis after a long rain delay to salvage the finale of a four-game series.

Despite the strong performance by Strasburg, the Nationals (13-17) fired pitching coach Derek Lilliquist after the game and replaced him with minor league pitching coordinator Paul Menhart. General manager Mike Rizzo made the announcement moments after the final out.

Strasburg (3-1) lasted 6 2/3 innings, giving up a run and six hits with two walks and nine strikeouts. He got opposing starter Dakota Hudson looking in the fifth for his eighth strikeout of the game and the 1,500th of his career — in 1,272 1/3 innings.

According to the Elias Sports Bureau, Boston left-hander Chris Sale held the previous mark, reaching 1,500 in 2017 after 1,290 innings.

Backed by a six-run fourth from the Twins against Peacock (2-2), Berrios (5-1) finished seven smooth innings with seven hits and two runs allowed to push the Twins to their first season series victory over the Astros since 2013.

With 52 home runs in 29 games, the Twins have powered their way to or near the top of the league in several hitting categories.

Arenado had three hits, including his ninth home run this season. Dahl finished a triple short of the cycle for the Rockies, who outscored the Brewers 22-10 in the final two games of the series.

Freddy Peralta (1-1) fell behind 7-0 by the second inning and gave up nine runs — six earned — eight hits and three walks in four innings.

Peralta (2-2) walked Daniel Robertson on four pitches leading off the ninth, and Lowe connected with two outs for his seventh home run this season.

Adam Kolarek (2-1) got the final two outs of the eighth, and Diego Castillo struck out two in a perfect ninth for his fourth save in as many chances.

The Padres broke the game open with a five-run fifth, helped by an errant throw from Atlanta pitcher Mike Foltynewicz (0-1) that allowed four unearned runs to score. San Diego added five runs in the sixth — the first time since 2000 they have scored five runs in consecutive innings.

Strahm (1-2) took a shutout into the sixth before allowing a two-run single to Nick Markakis.

TAMPA, Fla. (AP) — New York Yankees center fielder Aaron Hicks played in the outfield for the first time since being sidelined in early March by a strained left lower back.

Hicks threw out a runner trying to score Thursday, moving in to grab a fly in the fifth inning of an extended spring training game against Philadelphia Phillies minor leaguers. He made a perfect one-hop throw to plate to complete an inning-ending double play.

Hicks played five innings and had three hits, including a homer, in three at-bats and also walked.

He went 1 for 3 with a single and two walks as the designated hitter in his first extended spring game Wednesday.

Hicks is scheduled to DH on Friday and play seven innings in center Saturday at extended spring training.

Third baseman Miguel Andújar played defense for four errorless innings and went 2 for 2 with a two-run homer in his third rehabilitation game with Class A Tampa on Thursday night and could rejoin the Yankees this weekend. He ended up 3 for 10 overall after going hitless in his first seven at-bats.

Andujar went deep in the first before being replaced by a pinch-runner after getting a single in the fourth with steady rain falling.

Andújar has not played for the Yankees since tearing the labrum in his right shoulder while sliding into third base on a pickoff attempt on March 31.

There was no update on shortstop Troy Tulowitzki, who left his second game with Tampa on Wednesday night with tightness in the left calf. That is the same calf he strained last month and has kept him out since April 3. Tulowitzki singled to left in the first inning Wednesday but then was lifted for a pinch-runner.

Tulowitzki did not play Thursday night.