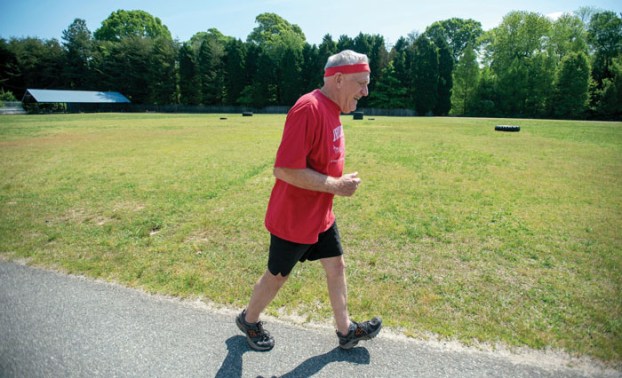 Marvin Jones hits the pool and runs on the outdoor track at the J.F. Hurley Family YMCA on Tuesday ahead of the Buck Hurley Triathlon. Jon C. Lakey/Salisbury Post

Rocket man: At 81, Marvin Jones is the oldest participant ever in Buck Hurley Triathlon

On Sunday, he’ll become the oldest athlete in the 10-year history of the Buck Hurley Triathlon in Salisbury. The triathlon starts starts at 7:30 a.m. at the J.F. Hurley Family YMCA.

These days, Jones says, “I schedule my training around my naps.”

Ester Marsh, race director and health and fitness director at the YMCA, was thrilled when she realized that an octogenarian would be on the course.

“When you keep working at it, you’ll be able to do a lot of things — maybe not a triathlon, but to keep moving and enjoying life,” she added. “At 86, my judo coach and mentor was still doing judo, running and weightlifting. He said, ‘Just keep moving.’”

That’s what Jones has done. He began his triathlon odyssey some 40 years ago.

“I was rather plump, and the running craze had started,” he recalled. “I started running and lost some weight. I was doing swimming and biking but not in events.”

He decided to take part in a sprint triathlon — the Hurley race is a sprint event — which includes a half-mile swim, 12-mile bike ride and 5K run. He was hooked.

He worked his way through the four levels of triathlons — sprint, Olympic (double the sprint distance), long (double the Olympic distance) and ultra, the Ironman distance.

“I did the Olympic distance more than anything,” Jones said. “It is just right for television. It took two hours.”

He completed several half Ironmans to prepare for the ultimate event.

“When I did the Ironman, they had run out of film by the time I finished,” he says, laughing.

He finished with a respectable time of 15 hours, 16 minutes. His daughter, Rebecca, finished the race in 10 hours, 35 minutes.

His younger daughter, Mary Willis Page, traveled to Hawaii, along with her mother, the late Reba Jones, to cheer on her family members. Jones’ son, Michael, is an electrical engineer who lives in Florida.

The triathlons were just a hobby for Marvin Jones, a chemist by training. He holds bachelor and doctoral degrees in chemistry, along with an MBA. But a supervisor in Texas once told him the best degree to have is MBWA — Management by Walking Around.

“Get off your rear and get out on the floor,” he urged Jones.

Jones spent his career has a chemist in the aerospace industry, formulating solid rocket propellants. So, he really was a rocket scientist.

“I even have a T-shirt that says, ‘As a matter of fact, I am a rocket scientist!’” he quipped. “My son was working on my computer recently and I said, ‘I don’t know what you’re doing, but if it were rocket science, I’d understand it.’”

Jones was part of a group that manufactured warheads for smart bombs during the first Gulf War. He lived in Maryland with his family but worked in nearby West Virginia. He later worked in California and retired to Arizona with his wife.

“He didn’t talk about the office when he came home from work,” said Page, who lives in Salisbury with her husband, Tommy.

Since Jones essentially worked at an explosives plant, he made sure to park his car as far away from the entrance as possible.

“I was always more interested in getting out than getting in,” he says.

In 1991, he finally tackled the Ironman Triathlon — the Big Kahuna, as it were.

“It took me several tries to qualify,” he admits.

He and his daughter swam 2.4 miles in the Pacific Ocean, biked 112 miles, then completed a marathon.

Jones’ wife always accompanied him to races, he says. “She would go anywhere, anytime.”

The two were married 52 years and 85 days — Jones has the accuracy of a scientist, after all — before her death in 2011. Jones and his older daughter moved to Salisbury from Arizona to be close to Page, but Rebecca Jones has since returned to Arizona for a nursing job.

The first year he was in town, Jones considered doing the Buck Hurley Triathlon.

Unfortunately, he ended up having shoulder surgery. But there was really no reason not to try it this year, he says.

He calls himself a slow runner these days, with a 15-minute mile pace. He used to get upset, he confessed, if his pace climbed over 8 minutes. These days, he runs about 30 miles a month, down from his peak of 100.

Jones admitted he’s a little apprehensive about Sunday’s race. He trains most every day, usually with two of the three components in the triathlon.

“It’s easy to run and swim,” he said. “I have been using the stationary bike, but it’s not the same.”

Jones goes to the Y typically late morning for workouts.

Jones plays bridge on Tuesday and Thursday at Rufty-Holmes Senior Center. He says he’s an above-average player, but he has no interest in becoming a Life Master. He’s also active with the Rowan County Republican Party and attends St. John’s Lutheran Church each Sunday with the Pages.

Jones expended some 7,000 calories during the Ironman races. He loaded up on bananas and Famous Amos chocolate chip cookies along the way, even asking one woman at an aid station for the fat on a piece of steak.

“It was so good,” he says, smiling at the memory.

Before Sunday’s race — which carries a requirement of 600 to 800 calories — he’ll eat his usual bowl of Cheerios.

When he was younger, Jones admits he’d often flirt with ladies along the route, waving and smiling as he passed. Now he says, “I just hope I don’t fall.”

SPENCER — Students in North Rowan High School’s theater program may have moved on from last year’s rendition of “The... read more