Pro football: Carson grad Stout gets a chance with Jets 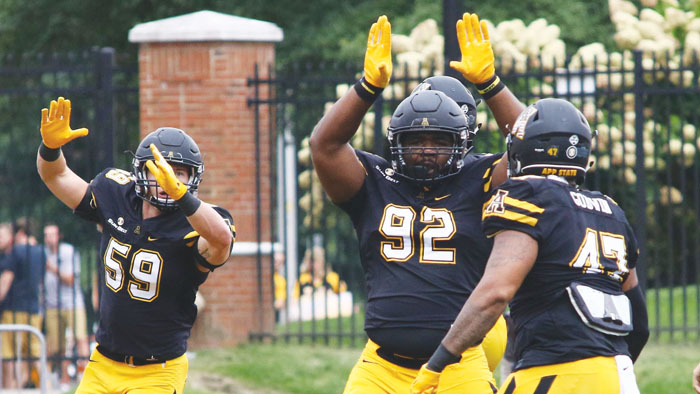 appstatesports.com photo ... MyQuon Stout (92), shown during his career at Appalachian State, celebrates a safety with a teammate. Stout, who played high school football at Carson, was a three-year starter for the Mountaineers. He signed a free agent contract last week with the NFL’s New York Jets.

“I’d talked to several teams that said they might take me in the later rounds, so to sit through seven rounds and not hear your name called isn’t easy,” Stout said, in a phone interview. “It’s not anyone’s dream to get called once the draft is over, but I do feel blessed that the phone calls came. Signing a free agent deal with the New York Jets, I’ll at least have a chance to show what I can do. My family is excited. They might be even more excited than I am.”

Stout, 23, was hired in January as a strength coach at the University of Louisville, where former Appalachian State head coach Scott Satterfield and former ASU strength and conditioning coach Mike Sirignano have moved on to the ACC, after experiencing runaway success in Boone.  They are still his mentors. He watched the draft with Sirignano.

Draft disappointment drained away quickly. Stout’s phone rang a lot. The Atlanta Falcons were first. They offered a tryout.

The Jacksonville Jaguars called next, offering Stout a free-agent contract.

The third call was from the Jets. It was one Stout wasn’t surprised to get. He accepted a free-agent deal.

“The Jets were one of the most interested teams all along, and a team I thought might draft me,” Stout said. “I’ve talked to their defensive line coach (Andre Carter) a  number of times, and we’ve got a good connection. The Jets have a new coaching staff and their defensive scheme fits what I can do. It’s all about being in the right scheme, and think it’s the best opportunity for me.”

With a new coaching staff, the Jets are changing a lot of things. The Jets don’t plan to hold a traditional rookie mini-camp, but they are hosting a four-day “rookie orientation” at the team facilities in Florham Park, N.J. Stout will report to New Jersey next Thursday.

NFL scouts generally gave glowing reports on Stout. They like his explosion, strength, understanding of leverage, pad level, intensity, effort, intelligence and leadership.  The only negative anyone has voiced are questions about whether he’s big enough.

His schedule has been incredibly rigorous the last few months. He shows up at the Louisville weight room at 4 a.m. for his own workout in the weight room. Starting at 7 a.m., he spends a full day working with Louisville student-athletes.

His budding strength coach career provides the perfect backup plan for him, if the NFL doesn’t work out.

Stout returned to Appalachian State on April for a Pro Day workout for NFL scouts. He showed explosion for a big man, with a vertical jump of 32 inches and a standing broad jump of 9 feet, 2 inches. He showed his strength and stamina, bench-pressing 225 pounds 28 times. He ran a 5-flat 40.

Stout’s first appearances in the Salisbury Post sports pages were as a young track and field phenom in the throwing events.

For a while, he thought of himself as a track man first, but in the fall of 2010, he started to shine in football.

When he was a sophomore, the 2011-12 school year, Stout was honored as the Post’s Rowan County Male Athlete of the Year. Not only did he excel in football, he was a starter on the basketball team as a charge-taking, gritty rebounder and he won a 3A state championship in track and field, taking the shot put with a throw of 55 feet, 4 inches.

Stout still holds Carson records for the discus (179 feet, 5 inches) and shot put (58 feet, 9 inches). Those marks should last a while.

Stout had a number of emotional setbacks in high school. He lost his 39-year-old mother. He battled through injuries. He kept pushing forward with the help of strong family and community support and he got a lot of coaching at Carson from people such as Mark Woody, Joe Pinyan and Brian Perry.

His senior season, Stout was a Shrine Bowler.

Stout arrived at Appalachian State as the first member of his family to go to college. He carried dreams and expectations, but it was arduous journey to get to where he is now.

In the fall of 2014, he was a football redshirt. His contributions to Appalachian State athletics that school year were mostly in track and field.  He placed sixth in the discus in the Sun Belt Championships.

Redshirt seasons are difficult, and Stout actually contemplated quitting football for a while. Football coaches convinced him to stick with it, that he had a future. He gave up track and field to focus on football. As a redshirt freshman, he got playing time as a reserve. Some games he would play 10 snaps. It was a beginning.

“The turning point was at the start of my sophomore season,” Stout said. “I’d gone from barely playing to being a starter, but it wasn’t overnight, it was because I’d worked my butt off that off season. But I was still very nervous about people counting on me to come through. Our first game was at Tennessee.”

Tennessee was ranked ninth nationally. There were 100,000 fans in the stands. The Mountaineers lost in overtime, but Stout made several eye-opening plays, including a goal-line stop on which he split a double-team to crush a ballcarrier. That was Sept, 1, 2016. He never looked back.

As Appalachian’s nose tackle, Stout didn’t rack up monster stats. Nose tackles don’t. Their effectiveness is measured by how often they can force double-teams and how well they can fill gaps. Stout did his job, and then some. He would start 35 games. The only game he didn’t start for the Mountaineers after that Tennessee game was a Senior Day game in which he yielded his starting spot to a senior.

Stout was a team captain as a junior and senior, a voice on the field and in the locker room as well as a leader by example. As a senior, when the Mountaineers had a top-5 defense nationally, Stout was honored as a first team All-Sun Belt player.

Appalachian State rose along with Stout, from 4-8 his redshirt season to 11-2 his senior year. He was a winner in his last six games, including a blowout victory in the New Orleans Bowl in the Superdome against Middle Tennessee, closing a stellar collegiate career.

“I can’t really say there was any one great moment or any one great game from my senior year that I’ll look back on,” Stout said. “That whole year was exciting and so much fun. It was a great ride, I’ve got three conference championship rings and four bowl wins to show for it.”

Now, Stout is preparing for the next leg of his journey. He’ll continue to make it alongside former ASU running back Jalin Moore.

“About 20 seconds after I got off the phone with the Jets, I got a text from Jalin telling me he’d agreed to a free-agent deal with the Jets,” Stout said. “I think that was God at work. We’ll be there for each other, We’ll push one another.”

“Those are athletes that I looked up to when I was just on the scout team at Appalachian,” Stout said. “Blair, especially, was that guy I wanted to be like, the guy I wanted to follow. I worked every day so that one day I might be as good as him.”

The Jets have made no promises. A free-agent deal doesn’t mean any money beyond expenses. This is just an opportunity, but Stout plans to take it — and run with it.

“I believe I bring a lot of assets,” Stout said. “I’m vocal. I won’t be out-worked. I’ll be that guy who runs to the ball on every play.”