Harden still dealing with eye injury but will play 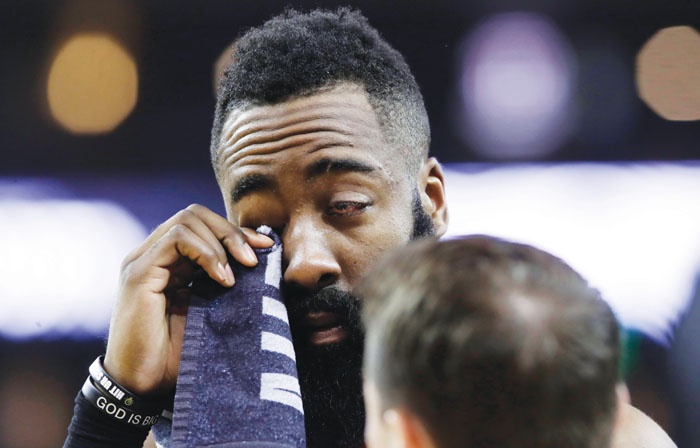 Houston Rockets' James Harden wipes his injured eye with a towel during the first half of Game 2 of the team's second-round NBA basketball playoff series against the Golden State Warriors in Oakland, Calif., Tuesday, April 30, 2019. (AP Photo/Jeff Chiu)

HOUSTON (AP) — James Harden squinted under the bright lights of the Toyota Center court on Thursday and parts of both eyes remained a garish, bloody red.

It was clear Houston’s superstar was still dealing with injuries to his eyes after being hit by Golden State’s Draymond Green in Game 2. Harden insisted the problem wouldn’t keep him out of Game 3 on Saturday as the Rockets try to climb out of an 0-2 hole against the two-time defending champions.

“If I played barely seeing last game, what makes you think I’m going to sit out Game 3?” Harden asked defiantly.

Harden was injured midway through the first quarter Tuesday night after a blow from Green as he tried to rebound a shot he missed. He immediately fell to the court where he remained writhing for a bit before he was tended to by Houston’s training staff and taken to the locker room. He returned with about seven minutes left in the second quarter and scored 29 points despite saying that his vision was extremely blurry and that he could see “nothing.”

“When he went out he had zero points and he comes back with not even one eye, one eye was almost shut and the other one was blurry and he gets 29 points,” coach Mike D’Antoni said. “Not many people would have played. So whatever happens, that’s pretty special.”

Harden practiced with the team Thursday as the Rockets prepare to host Golden State for two games.

Though both eyes are injured, the left one is far worse than the right with the entire left side of the eye remaining bloody. The right eye was bloody, too, but it was a much smaller section in the left corner of that eye.

“It’s still there,” he said. “It’s still tough, especially in bright lights but I can see y’all a little bit better so that’s all that matters.”

Harden said he visited a doctor Wednesday and “he gave me some stuff to calm it down to make it better.” He said he didn’t know the exact diagnosis of his injury, but the team called it contusions to both eyes. He added that the doctor told him that he’d be “good,” but that it will take a few days to heal.

“That was a freak injury. I feel bad for James,” Warriors coach Steve Kerr said after practice Thursday before his team left for Houston. “And obviously Draymond did, too, and went over and apologized. But that’s just one of those plays that happens, so I’m glad that James is OK. Everything seems to be fine.”

Last year’s MVP said he’s dealt with a variety of injuries, but that this one has been the most difficult.

“It’s different,” Harden said. “Like an ankle injury, I’ve rolled my ankle 100 times or whatnot and you kind of know how to deal with that. When you’ve got blurry vision and you can’t see it’s really difficult. But still no excuses.”

Harden and D’Antoni scoffed at the notion that he would wear goggles or protective eyewear of any kind Saturday. D’Antoni even went so far as to make a joke about if he’d need something like that to play.

“Maybe one patch over an eye,” he said, snickering. “It’s going to be the pirate look.”

The 60-year-old executive received immediate medical attention Tuesday night in Milwaukee, the team said in a statement Thursday. The Celtics were facing the Bucks in the second round of the playoffs. Ainge, who also had a mild heart attack in 2009, was scheduled to return to Boston.

Celtics coach Brad Stevens said after the team practiced Thursday that he’s been in frequent communication with Ainge’s family. He said they all seem to be doing well.

“That’s all positive, but certainly it’s scary,” Stevens said. “To me, he’s a friend and the family’s been so good to us. So, you don’t even think about anything else. You just want him to be comfortable and feeling great, getting better, that it’s a good prognosis.”

Game 3 of the Celtics’ series with the Bucks is Friday night in Boston.

Stevens’ comments were echoed by Celtics guard Marcus Smart, who said the team was informed by the coaching staff before practice Thursday. Now in his fifth season in Boston, Smart is the longest-tenured player on the roster.

Smart shares a close relationship with Ainge, who was there to comfort him while his mother, Camellia Smart, endured and eventually died from cancer last year.

“Danny is just one of those guys. He takes time out of his life and his day, whatever he’s doing and his schedule, to make sure you’re all right,” Smart said.  “He constantly checks in on my family and everything like that. Just personally for me he’s been like another mentor for me.

“From when I first got here Danny was that person I seen every day. … He means a lot to my life as well. I just hope he makes a speedy recovery.”

Ainge was a two-sport star at BYU who in 1981 won the Wooden Award as the nation’s top college basketball player. He played parts of three seasons with the Toronto Blue Jays, batting .269, before settling into a 14-year career in the NBA.

Ainge was an All-Star in 1988 and won two championships with the Celtics alongside Larry Bird, Robert Parish and Kevin McHale.

Ainge coached the Phoenix Suns for three-plus seasons and took over the Celtics’ basketball operations in 2003. He was named NBA executive of the year in 2008 after engineering the deals for Kevin Garnett and Ray Allen that helped the Celtics raise their record 17th championship banner.