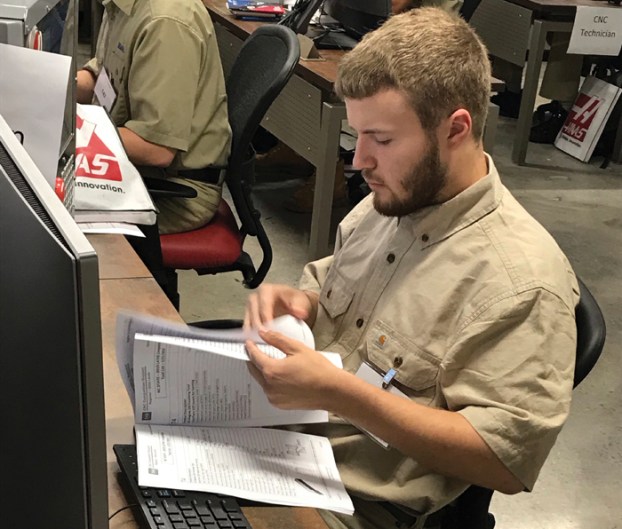 The competition was held April 9-11 at the Greensboro Coliseum and Koury Convention Center.

Cooper is a senior at Yadkin Valley Regional Career Academy. In the state competition, he and other students worked against the clock and each other, proving their expertise in their chosen occupations.

All contests are run with the help of industry, trade associations, technical experts and test competencies set by industry. More than 100 industry partners, including Lowe’s, Irwin Tools, 84 Lumber and ASE, support the competitive events.

“I was surprised and excited when I was told I had received first place,” Cooper said. “I was competing against 150 students from across the state. But I just did what I came to school to learn.”

On top of his school work, Cooper is employed at Ingersoll Rand in Mocksville. He plans to continue his education to become a mechanical engineer.

“I was honestly interested first in automotive technology,” Cooper said. “My grandpa always said I should pick up a trade. And now with a degree in machining under my belt, job offers before graduating from high school, and a pathway to become a mechanical engineer, I consider myself very lucky.”

The conference was the largest showcase of career and technical education in North Carolina with more than 2,500 students competing in more than 120 hands-on trade, technical and leadership contests. The contests span more than 95 trade areas from construction, automotive and welding to drafting, public safety, culinary and cosmetology.

The SkillsUSA North Carolina Championships are for middle school, high school and college students who are members of SkillsUSA.  First-place winners earn the right to compete in the National SkillsUSA Championships in Louisville, Kentucky, alongside more than 7,000 other competitors from across the country in more than 100 contests.

“I’ve been lucky to have supportive people in my life and the chance to take every opportunity that has come my way,” Cooper said. “I’m just doing the best I can with the hand I was dealt.”

SALISBURY — For the fourth annual Food Lion Feedys, the Salisbury-based company has recognized and rewarded food banks across its... read more