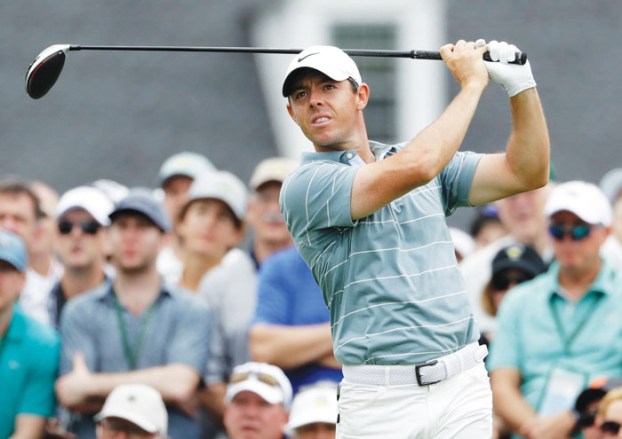 FILE - In this April 13, 2019, file photo, Rory McIlroy, of Northern Ireland, hits a drive on the first hole during the third round for the Masters golf tournament, in Augusta, Ga. McIlroy is at the Wells Fargo Championship this week in Charlotte, N.C., where he turns 30 on Saturday, May 4. (AP Photo/Marcio Jose Sanchez, File)

CHARLOTTE (AP) — Rory McIlroy has two more rounds before he leaves his 20s, a statement of fact more than a state of mind.

For McIlroy, 30 is just a number he prefers to see on one side of a scorecard.

In most other lines of work, turning 30 is just getting started, and even with a few specks of gray in his once curly hair, McIlroy still feels like one of the younger players in golf. He played a practice round this week at the Wells Fargo Championship with Sam Saunders, who is only about two years older.

McIlroy, among three of the top 10 players in the world at Quail Hollow, has been around the highest level of golf for nearly half his life.

He played his first European Tour event nearly 14 years ago at the 2005 British Masters and had rounds of 82-81 at Forest of Arden. He turned pro two years later at age 18 and opened with a 69 in the British Masters at The Belfry on his way to a tie for 42nd.

He won for the first time at the Dubai Desert Classic when he was 19. His first PGA Tour victory was at Quail Hollow, a 66-62 victory. McIlroy, who turns 30 on Saturday, won 23 times worldwide, including four majors, in what he referred to in January as the first phase of his career.

Young or old, the 30s tend to be the prime of a golfer’s career.

That’s how Rickie Fowler felt about the majors when he turned 30 late last year. It’s how Jason Day felt when he hit 30 at the end of 2017. Golf was all Day ever really knew, and he turned pro at 18, the same as McIlroy.

“Being 30, I didn’t feel old. But when you looked at some of the younger guys, you know you’re old — older,” he said with a laugh. “I think once I turn 40 that will change in my mind. Because your peak years should be 30 to 40 if you can stay healthy, touch wood. You’ve got all that experience behind you.”

Health has been an issue for Day, who earlier this year had to pull out of Bay Hill and get cortisone shots for a back that betrayed him again. He recovered in time to tie for eighth in The Players Championship, and he made a reasonable run at the Masters with a closing 67 to tie for fifth.

He doesn’t expect problems this week because of the heat.

McIlroy has found Quail Hollow to be one of his favorite haunts as a two-time champion with four other top-10 finishes, including a playoff loss to Fowler. Plus, the Wells Fargo Championship signals the next stage of a season with the Masters behind him and the PGA Championship at Bethpage Black two weeks away.

McIlroy failed for the fifth time to complete the career Grand Slam at the Masters, done in by suspect driving. He spent last week with longtime coach Michael Bannon trying to get his posture back to where it was, a process that is nearly complete.

From a larger point of view, the next phase of his career involves finding balance and perspective to play at a high level and let the results happen instead of trying to force low scores. He doesn’t look at the schedule as a major a month but rather a year of opportunities.

“I’m just playing tournaments. I’m just going through my schedule,” he said. “I’m playing here, I’m playing up at Bethpage. … I would assume Bethpage is going to feel like a normal PGA Tour setup. You’re not really going to have to do anything differently. I don’t know if guys are going to go up early and look at the course or not. I’m not planning to. I’ve never done that for a PGA before, and I’ve done pretty well at them. Just treating it like any other event.”

He has added a tournament before the U.S. Open — the RBC Canadian Open — because he has missed three straight cuts in the U.S. Open and wants to mix it up.

“I don’t view it as just this big week or this big week,” he said. “It’s a stretch of golf coming up, and I’m excited about that.”