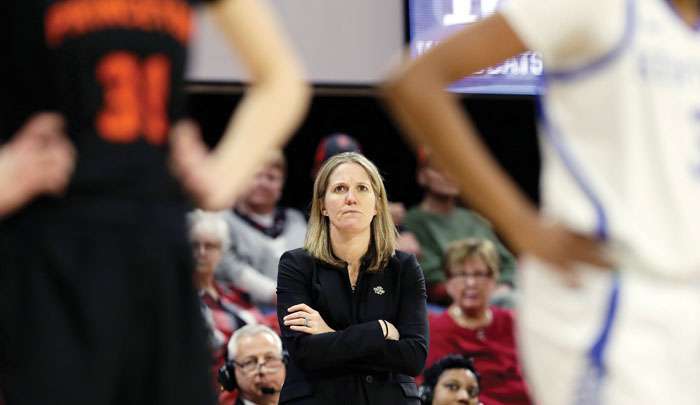 FILE - In this Saturday, March 23, 2019, file photo, Princeton head coach Courtney Banghart looks on during the first half of a first-round women's college basketball game against Kentucky in the NCAA Tournament in Raleigh, N.C. A person with knowledge of the situation says North Carolina has reached a deal with Princeton's Banghart to become the Tar Heels' next women's basketball coach. (AP Photo/Gerry Broome, File)

RALEIGH (AP) — Courtney Banghart built the Princeton women’s basketball program to the point that winning conference championships and going to the NCAA Tournament seemingly became routine. Now she’ll try to do the same at North Carolina.

UNC hired Banghart on Tuesday to be the Tar Heels’ new coach. Her challenge in Chapel Hill includes going from an Ivy League school that didn’t award athletic scholarships to recruiting for a power-conference program and building a contender in a league that features national powers Notre Dame and Louisville.

“I have aspirations to win a national championship,” Banghart said Tuesday in a teleconference with reporters. “Otherwise, I wouldn’t have left Princeton because it’s a place that I love, it connects to my core values and we win all the time. … We’ve just got to get started. It’s going to take time, and that’s OK. I’ve got time.”

The school announced Banghart’s hiring after UNC’s board of trustees approved terms for a five-year contract for the 40-year-old coach. She went 254-103 in 12 seasons at Princeton, guiding the Tigers to seven Ivy League titles and eight NCAA Tournament bids in the past decade.

“We were looking for the absolute best coach we could find,” UNC athletic director Bubba Cunningham said. “Courtney rose to the top and we’re delighted she’s part of Carolina.”

Teams of the deal released by UNC state Banghart’s contract will pay $650,000 for the 2019-20 season in base salary, supplemental pay, expense money and compensation from Nike as the school’s apparel provider. That will gradually increase to $730,000 by her fifth season in 2023-24.

There are also bonuses of up to $470,000 available annually for the team’s academic performance, winning an Atlantic Coast Conference championship and for how far the Tar Heels advance in the NCAA Tournament.

Banghart replaces Sylvia Hatchell, a Hall of Fame coach who resigned April 18 after an external investigation found she had made “racially insensitive” comments and pressured players to compete through medical issues. The report released following the review of the program also cited a “breakdown of connectivity” between Hatchell and the players after 28 interviews of current players and program personnel.

Banghart said she would meet with players Wednesday and would eventually reach out to Hatchell, but it’s unclear exactly who will be back in next season’s lineup.

Junior Destinee Walker announced in a social media post in March that she would graduate and transfer after playing just four games last year and missing the 2017-18 season with an injury.

Additionally, redshirt junior Stephanie Watts, redshirt sophomore Jocelyn Jones and freshman Kennedy Boyd have put their names in the transfer portal, a person familiar with the situation confirmed. The person spoke to The Associated Press on condition of anonymity because neither the school nor the players have announced the moves.

The Tar Heels were already losing top scorer Paris Kea (17.3 points) to the WNBA from a team that returned to the NCAA Tournament for the first time since 2015. Still, Banghart inherits a program that needed a jolt of energy after some bumpy years for the Tar Heels even before Hatchell’s exit.

During some of those lean times the program was under the shadow of the school’s multi-year academic case dealing with irregular courses featuring significant athlete enrollments across numerous sports, a case that reached a no-penalty conclusion in October 2017. Along the way, there were several transfers and hits to recruiting that hindered the women’s basketball program in the years following its NCAA Sweet 16 appearance in 2015.

DES MOINES, Iowa (AP) — An Iowa philanthropist has given $5 million to the Drake University women’s basketball program in what the school said is the largest non-capital gift of its kind.

Drake announced the gift Monday from Suzie Glazer Burt, a member of the university’s board of trustees. In a statement, Glazer Burt complimented coach Jennie Baranczyk and the basketball program, saying “when women empower women, there is no limit to the impact we can make in the lives of these incredible student-athletes.”

Drake didn’t release specifics about how the gift would be used but said some would endow the head coaching position and some would enhance support for students.

The Drake women have won three straight Missouri Valley Conference tiles. Drake went 27-7 this season and received an at-large bid to the NCAA Tournament, where the Bulldogs lost in the first round to Missouri, 77-76 in overtime.

Changing that will start with recruiting, a topic of numerous questions for Banghart on Tuesday. She said she plans to add assistant coaches with different experience as she builds her staff. And she pointed to the fact that she’s already recruited against scholarship-offering schools while at Princeton — which instead offered aid to athletes based on financial need — and still built “a high-major starting five.”

Recruiting could be a little easier in that regard at UNC.

“It’s a place that can attract the very best players in the country,” Banghart said. “Bubba and his staff have hired me to do that. I look forward to literally changing someone’s life with an opportunity at Carolina.”

Only a month between PGA majors leaves no time…