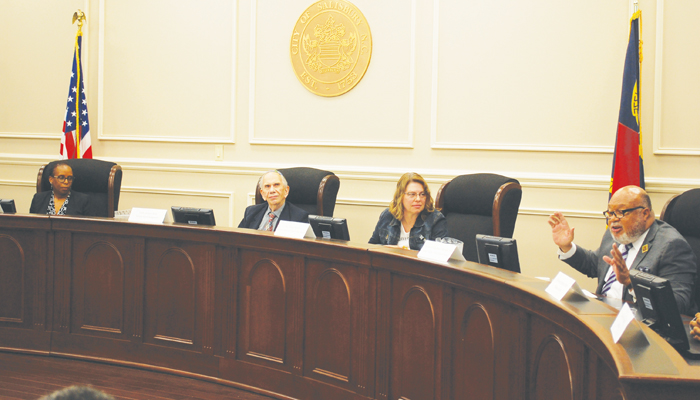 SALISBURY — Bringing together various religious leaders, Salisbury Mayor Al Heggins on Tuesday said she wanted to begin a conversation about the intersection of faith and social justice at this year’s Mayor’s Spirit Forum at City Hall.

Heggins listed hate crimes — starting with Charlottesville in August 2017 and ending with this weekend’s shooting at a San Diego synagogue during Passover observance. Heggins said she wanted to share the information as a wake-up call.

“We cannot lull ourselves into thinking we, here in Salisbury, are immune,” Heggins said. “These incidences take place in cities and towns where they do not expect them to take place. For us, we must be proactive and diligent — hence, our conversation tonight.”

As the Mayor’s Spirit Forum continued on, those gathered learned that a deadly shooting took place at UNC Charlotte.

“Once again, this is the very phenomenon we just talked about. We just covered the expanse of human history, American history, and at the culmination of that close, we are notified that history continues to move and violence continues to be spread,” Damashii said.

The Rev. Regina Dancy, of Hood Theological Seminary, repeated Heggins statement at the beginning — that Salisbury is not immune.

“In order for this violence and for this racism and all of this to begin to eradicated, I believe it’s going to take all of us working together,” Dancy said.

Mayor Pro Tem David Post said, although he thought the conversation was great, expressed sadness that, as the weekend comes, those gathered would likely return to their religious institutes instead of visiting a different one.

Teresa Rowell, of Piedmont Unitarian Universalist Church, spoke of getting out of her comfort zone and challenging herself. She said doing nothing is not a choice she could make.

Participants were able to make comments or ask questions of the panelists. One came from Mary Walker, who called for white people to stand up and speak out against racism.

The Rev. Robert Black, of St. Luke’s Episcopal Church, said “the oppressor” has to be the one leading the change. He said racism is causing suffering for all of humanity. Because of that, humans have not experienced what humanity truly is, he said.

Syed Ahmad, of Masjid Quba Mosque, confessed that he considered himself a racist against the Chinese while growing up in Malaysia. He said, fighting tears, that was what he learned growing up, but that changed when he moved to the United Sates.

“I’m glad I moved to the South because it opened my heart,” Ahmad said.

“This is why this is important,” Smith said. “We don’t know how to gather as community to reflect and have moments of confession like that.”

The soul of the community met Tuesday night, he said.

Heggins closed the forum by thanking the Human Relations Council for taking a chance on her to do the panel. It wasn’t the Mayor’s Spirit Forum but the “Community Spirit Forum.”