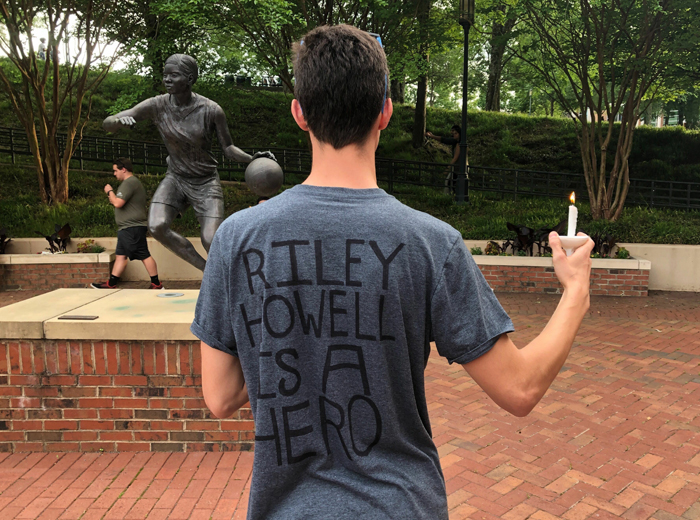 David Belnap, a sophomore at the University of North Carolina at Charlotte, displays a T-shirt Wednesday in support of Riley Howell, a classmate who was killed while confronting a gunman inside a classroom on Tuesday. Howell was one of two people killed. AP photo/Skip Foreman

Those eight words and two simple sentences are fresh on the mind of Liam Harrell, from Salisbury and a sophomore at the University of North Carolina at Charlotte. They were spoken late Tuesday afternoon as he and other university students fled the campus after digital and phone alerts of an active shooter.

The campus shooting took the lives of two and injured four others, with three in critical condition.

“We had no clue what to do,” Harrell said Wednesday as he recalled receiving the alert. “We just kind of panicked.”

He was in the university’s Fretwell building, just two buildings away from the shooting at the Kennedy building.

Harrell said students filtered en masse out of buildings. Helicopters hovered overhead, and police officers were sprinting about. Harrell and other students ran for cover in neighboring woods.

“When we saw helicopters above us is when we knew it was really, really serious,” he said.

Across campus, Granite Quarry resident Sean Fox, who handles media relations for the school’s baseball team, was minutes away from the start of a game against the University of North Carolina at Greensboro. And a concert was planned at the football stadium, he said.

“There was more going on than a typical Tuesday because it was the last day of classes,” Fox said.

He said the increased activity was a blessing in disguise because it meant an extra number of police officers were on campus. His first clue to the events transpiring was the rapid movement of officers from the athletics department to the “main side” of campus.

Next came the alert.

“We thought ‘OK, this is confirmed; now what do we do?'” he recalled.

Fox said he assisted as teams were moved off the field and the stadium was evacuated. Next, his attention went to a Little League team using campus facilities for an awards banquet.

“My focus went to them and to staff workers,” he said. “I wanted to make sure everyone was inside and safe.”

The response was natural, Fox said, likening the campus and all its different departments to family.

Concern for the well-being of others has continued past the shooting, with staff members and students exchanging phone calls in the hours following, checking on each other’s physical and mental well-being.

Leaders of the college are already offering grief counseling services, and students organized a vigil for 6 p.m. Wednesday.

“I’ve seen it happen everywhere else, but it was a really strange thing for it to happen at my school,” Harrell said. “We’re all still really confused, but we want to just send as much love as we can to the community.”

Fox said that thinking about the shooting feels “surreal” and that its impact weighed heavier on him the closer he got home Tuesday night.

“Just like anything else, you wake up and hope it was all just a bad dream,” he said. “This morning, it was still very much a reality.”

Both praised campus security and local police departments for their quick responses.

Harrell said any needed change in response to the shooting would need to come at a higher level.

“Whether it’s a gun law change or just a culture change, something needs to happen,” he said.

But Fox said he does not think gun control or reform would necessarily prevent “another thing like this from happening.”

Instead, he encouraged those on the outside looking in at UNC-Charlotte to follow the campus’ example of preparation.

“This can happen anywhere,” he said. “If there’s a plan in place, practice it. All of the alerts that we got and all of our preparation for something like this paid off when it was absolutely crucial, when it needed to.”