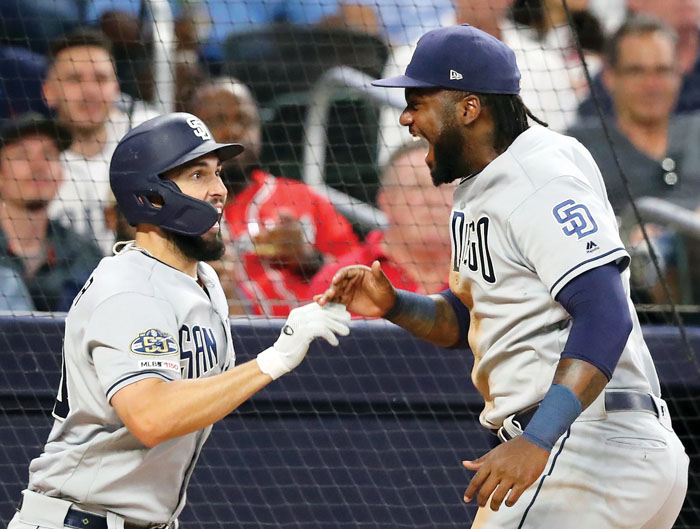 Reyes homered on the 11th pitch of the game, followed by another solo shot in the sixth to break a 2-2 tie. Two batters later, Hosmer drove one out to give the Padres a bit of insurance.

Paddack (2-1) went six innings, surrendering only a two-out, two-run single to Matt Joyce in the second. The right-hander gave up just four hits, walked one and struck out five.

In the first six starts of his career, Paddack has yet to surrender more than three runs while posting an ERA of 1.91.

Julio Teheran (2-4) became the ninth pitcher in Braves’ franchise history to start 200 games, but he had no answer for Reyes. The San Diego right fielder also had a run-scoring double in the third.

The Padres were again without prized rookie Fernando Tatis Jr., who went on the injured list before the game with an ailing hamstring. Manny Machado made his first start of the season at shortstop, while Ty France is expected to hold down third base until Tatis returns to the lineup.

Reyes picked up the slack with his second multi-homer game in eight days, giving him eight homers on the season. He also went deep twice on April 23 against Seattle.

Craig Stammen gave up a run-scoring single to Ronald Acuna Jr. in the eighth, but Kirby Yates worked a scoreless ninth for his major league-leading 14th save in as many chances.

Padres: Tatis went on the 10-day injured list, but he’s expected to be out longer with a strained left hamstring. The rookie phenom was hurt Sunday when he did an awkward-looking split while trying to stretch for a throw at second base at Washington. After missing Monday’s game at Atlanta, Tatis underwent an MRI that showed no structural damage but indicated a recovery period that manager Andy Green described as “weeks.” RHP Phil Maton was recalled from Triple-A El Paso to fill Tatis’ spot on the roster, at least in the short term.

Braves: 3B Josh Donaldson was a late scratch because of right calf soreness, a move that was described as precautionary by the Braves. It was a similar situation with CF Ender Inciarte, who left Monday’s game with tightness in his right hamstring. He didn’t start but was used as a pinch-hitter in the seventh inning, striking out with two runners aboard. Inciarte is expected to return to the lineup Wednesday.

Porcello (2-3) allowed only two hits and walked two while winning his second straight start. He also became the first starter to go past the seventh inning for the World Series champion Red Sox in a rough opening month of the season.

Mookie Betts and Mitch Moreland homered for Boston and the Red Sox won for the fourth time in six games.

Tyler Thornburg pitched the ninth and lost the shutout when Robbie Grossman hit a leadoff homer.

Betts put Boston up 1-0 with a homer in the first, his sixth of the season. Sandy Leon added an RBI single in the second and Moreland added a two-run homer in the fourth to make it 4-0.

Brooks, who pitched six scoreless innings and struck out six against the Red Sox on April 1 in Oakland, had just two strikeouts this time. He left the game after Rafael Devers doubled in J.D. Martinez, who reached on an error by center fielder Ramon Laureano, to put Boston up 5-0.

Sabathia entered Tuesday night’s game against Arizona with 2,997 strikeouts and hit the milestone by fanning three batters in the second inning.

The Yankees poured out of the dugout to congratulate the 38-year-old Sabathia and the crowd roared after the big left-hander struck out John Ryan Murphy — Murphy was one of Sabathia’s former catchers with the Yankees.

Sabathia tipped his hat to the crowd and hugged his kids in the front row before heading to the on-deck circle to lead off the next inning.

Sabathia joins Randy Johnson and Steve Carlton as the only lefties to reach 3,000 strikeouts.

Now in his 19th big league season, Sabathia is the first pitcher to hit the 3,000 mark since Atlanta’s John Smoltz in 2008.

WASHINGTON (AP) — Adam Wainwright pitched neatly into the seventh inning, helping himself by kicking the ball over to first for a key out, and the St. Louis Cardinals beat the Washington Nationals 3-2 on Tuesday night.

Harrison Bader drove in two runs and Kolten Wong had two hits as NL Central-leading St. Louis earned its fourth straight victory. It was the Cardinals’ 18th win in April, matching a team record set in 2008.

Wainwright (3-2) allowed two runs and six hits in 6 1/3 innings. He struck out five and walked two.

PHILADELPHIA (AP) — Miguel Cabrera had an RBI single and Niko Goodrum added a two-run homer to lift the Detroit Tigers to a 3-1 victory over the Philadelphia Phillies on Tuesday night.

Spencer Turnbull pitched six strong innings as the Tigers snapped a four-game losing streak while rebounding from Sunday’s 4-1 loss at the White Sox in which they tied a major-league record for a nine-inning game with 20 strikeouts.

Cabrera moved into a tie for 68th all-time with 2,705 career hits. He matched Doc Cramer with a third-inning base hit to left to help the Tigers win the interleague game. It was the Tigers’ first meeting with the Phillies since 2016 and their first trip to Philadelphia since 2007.

The NL East-leading Phillies managed just four hits while falling to 11-6 at home.