Only a month between PGA majors leaves no time to reflect 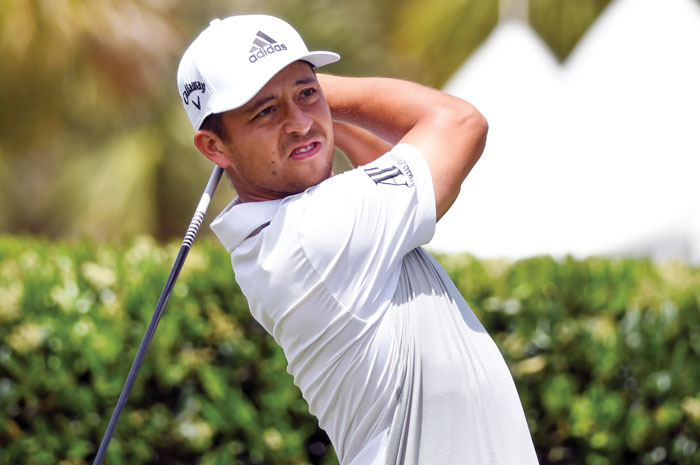 Xander Schauffele tees off on the first hole during the first round at the RBC Heritage golf tournament in Hilton Head Island, S.C., Thursday, April 18, 2019. (Drew Martin/The Island Packet via AP)

CHARLOTTE (AP) — The Masters in his rearview mirror, Justin Rose is excited about what he calls the next stage of the golf year.

Except in this case, objects might be closer than they appear.

Because while the next major is in two weeks, the first one ended only two weeks ago.

Still fresh for Rose is a Masters plan that went awry. For a five-month stretch, no one played better than Rose. He won twice, was runner-up twice and had a pair of third-place finishes over 10 tournaments that took him to No. 1 in the world. He took a five-week break to recharge, felt a little flat in his return during the Florida swing and then missed the cut at Augusta National for the first time.

There’s no time to reflect.

The PGA Championship moving to May for the first time since 1949 is causing Rose and several other players to adjust their plans. The new schedule features a major a month, which doesn’t allow players time to think, much less play.

“It is different, for sure,” Rose said Tuesday at Quail Hollow. “There was a big focus on Augusta, and then in some ways you had until the U.S. Open so you could forget about major championship golf for at least a few weeks.”

The Wells Fargo Championship figured to be a big winner in the compact schedule. The tournament typically had one of the strongest fields of May, and now that only four weeks separate the Masters from the PGA Championship, it would seem to be the perfect place to get geared up for the next major.

That hasn’t been the case.

Missing from the field this week is Tiger Woods, who rarely missed Quail Hollow when his health was in good order. He said last week that winning the Masters for his first major title in 11 years took a lot out of him and he simply wasn’t ready to get back to work just yet.

That means he will not compete between majors for the seventh time in his career. On two of those occasions, he won the next major — the 1999 PGA Championship in August and the 2008 U.S. Open in June, right before reconstructive knee surgery. He missed the cut at the U.S. Open in 2006, when he took off nine weeks to deal with the death of his father.

With only a month between majors, does a player risk losing form in such a short period of time?

“This seems like a leading question,” Henrik Stenson said with a grin. “Is there someone who’s going to do this in particular? Someone who maybe won at Augusta?”

But it’s not just Woods.

That schedule also fits Justin Thomas, the No. 5 player in the world who pulled out of Quail Hollow as a precaution because of a wrist injury. Bryson DeChambeau is not on the list to play next week in Dallas, meaning he also will go a month between majors.

Others are not too far removed.

Dustin Johnson, the No. 1 player in the world, played at Hilton Head the week after the Masters and is likely to have three weeks off before the PGA Championship unless he decides to add Dallas at the last minute. Ditto for Francesco Molinari and Xander Schauffele.

Rose and Rory McIlroy are playing only at Quail Hollow between the majors, and Rickie Fowler appears to have the same plan.

Brooks Koepka is keeping a relatively busy schedule. He played last week in New Orleans with his brother, and Koepka has committed to playing next week in the AT&amp;T Byron Nelson, mainly because he prefers to play the week before a major.

“It’s what works best for you,” said Stenson, who is keeping the busiest schedule of all. Because he was recovering from an arm injury late last year and did not make his first PGA Tour start until Mexico City in late February, the Swede is playing seven out of eight weeks.

“I like the schedule with us having one big event every month now,” Stenson said. “It gives the players a chance — if majors are your focus — to prepare more in the way you like, if you want to play the week before or you want to play the week after, whatever is your preference. It’s something we’ll get used to. It will be a year or so before we won’t talk about how it was back in the day.”

Rose originally looked at the majors in 10-day blocks, meaning he would arrive early the weekend before to prepare, take off on Monday and then ease his way into the week. That didn’t work out for him at Augusta because he felt he had been at the tournament site too long.

So it’s back to the old way of thinking amid a new schedule. He plans a trip to Bethpage in the middle of next week, then will return home to the Bahamas to relax and head back to Long Island early during PGA week.

“My preparation going into the PGA has changed because of the run-up into Augusta,” Rose said. “So you’re always adapting and always learning and trying not to make the same mistakes.”

Whether that plans works depends on the score. That much about golf hasn’t changed.