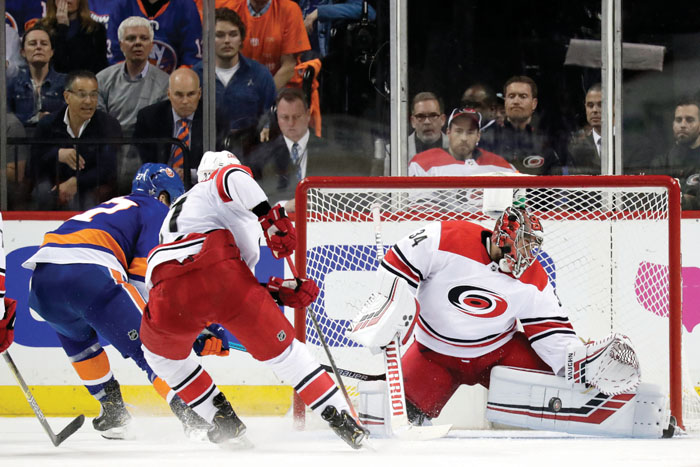 RALEIGH (AP) — Rod Brind’Amour considers himself lucky to have two goalies he trusts. It looks like he is turning to the second one.

The first legitimate goalie dilemma of the playoffs belongs to the Carolina Hurricanes, now that starter Petr Mrazek is dealing with a lower body injury that has him day to day.

With Mrazek unlikely to start Game 3 against the New York Islanders on Wednesday night (7 p.m. EDT, NBCSN), the Hurricanes will try to take a 3-0 series lead behind what could be the first playoff start for journeyman Curtis McElhinney in his 11-year career.

There hasn’t been much instability at that position across the league during this postseason, which makes sense — teams generally don’t make the playoffs with shaky goaltending. Carolina became the third team to use multiple goalies, and there wasn’t even a whiff of controversy for the two other teams making in-game moves.

In Carolina, though, an injury has left the Hurricanes with some uncertainty.

Mrazek has started all nine postseason games for the Hurricanes, but he left the last one early with an injury that, as is usually the case in the NHL, has not been publicly disclosed. It was the first time all season that the Hurricanes made a mid-game goalie switch.

Brind’Amour calls Mrazek’s injury “a nagging thing,” adding that “I don’t know how long it’s going to go, but it shouldn’t be too long.”

McElhinney stopped all 17 shots he faced to close out Game 2 in just the third postseason appearance he’s ever made.

“It’s just gas and go,” McElhinney said. “It’s one of those things that I’ve been around long enough and I’ve been thrown into those situations before. Obviously, the playoff atmosphere’s a little bit different but the game itself is still the same. I’ve felt pretty good all year long.”

Less than 12 months ago, nobody saw a Mrazek-McElhinney combination coming, much less figured they would backstop Carolina to the verge of the Eastern Conference final.

The Hurricanes brought in Mrazek last July 1 — the same day they allowed former Conn Smythe Trophy winner Cam Ward to leave for Chicago — to compete with Scott Darling for the starting job.

When Darling was injured in the preseason finale, Carolina found the 35-year-old McElhinney on the waiver wire and the journeyman fit so well with the Hurricanes that they placed the largely ineffective Darling on waivers and sent him to their AHL affiliate in Charlotte.

Carolina allowed 2.7 goals per game during the regular season. Mrazek stopped 91.4 percent of the shots he faced while McElhinney’s save percentage was .912. Both of their save percentages are better than any Hurricanes goalie since 2014 with more than 30 appearances.

It’s also worth noting that the last time the Hurricanes made a goalie switch during the playoffs, it worked out pretty well for them.

Carolina began the 2006 postseason with Martin Gerber in net, but while dealing with health issues, he gave up nine goals during the first 75 minutes of the Hurricanes’ first-round series with Montreal. Coach Peter Laviolette turned to Ward, who led the team captained by Brind’Amour to the Stanley Cup.

The Dallas Stars find themselves in the same situation they were in the first round of the Western Conference playoffs, down 2-1 in the series going into Game 4 at home.

Dallas came back against Nashville with three wins in a row to wrap up that series in six games.

While the Stars have been good on special teams, with a power play goal and a short-hander in Game 3, St. Louis outscored them 4-1 in 5-5 situations on Monday night and has a 7-3 advantage in the series at full strength.

Stars coach Jim Montgomery knows “5-on-5 is how you’re going to win in the playoffs, and that’s the area of the game that we need to improve upon.”