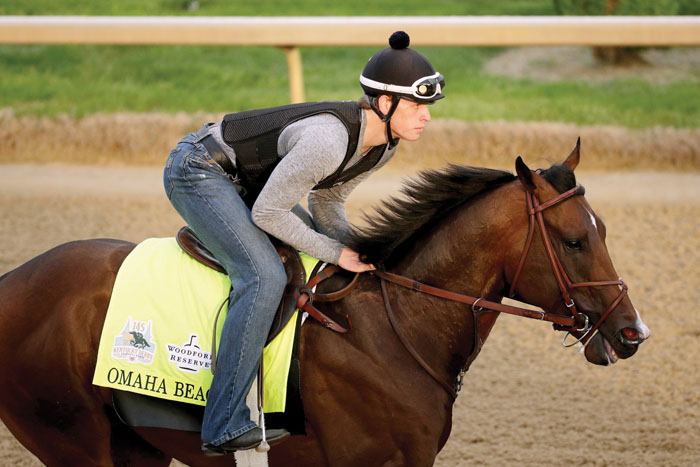 Exercise rider Taylor Cambra rides Kentucky Derby entrant Omaha Beach during a workout at Churchill Downs Wednesday, May 1, 2019, in Louisville, Ky. The 145th running of the Kentucky Derby is scheduled for Saturday, May 4. (AP Photo/Charlie Riedel)

LOUISVILLE, Ky. (AP) — Favorite Omaha Beach has been scratched from the Kentucky Derby because of a breathing problem.

The colt from Southern California was made the 4-1 early favorite for Saturday’s 145th Derby. Omaha Beach  galloped Wednesday morning without any problem and trainer Richard Mandella said everything was fine.

But that changed by late afternoon when Rogers said Omaha Beach has an entrapped epiglottis, the cartilage at the base of the airway that hampers the colt’s breathing. It’s generally not a career-threatening problem and is usually corrected with minor surgery.

The role of likely favorite now falls to Game Winner, who was the 5-1 second choice. Omaha Beach’s scratch moves Bodexpress into the field with the No. 20 post.

LOUISVILLE, Ky. (AP) — Jon Court would set a record as the oldest jockey in the Kentucky Derby when he rides Long Range Toddy this weekend.

Court is 58, which is a lot of candles on the birthday cake for someone still participating in an incredibly dangerous sport.

Churchill Downs officials say the current record holder is Bobby Baird, who was 57 when he rode in the 1978 Derby.

Mike Smith, who is 53, will ride early favorite Omaha Beach in the Derby on Saturday.

Bill Shoemaker is the oldest jockey to win the Derby, at 54 aboard Ferdinand in 1986.

It takes a combination of skill and a healthy dollop of luck to persevere when most of the competition since riding your first winner in 1980 has long since retired.

“I’ve been blessed,” Court said. “I’ve been fortunate to have the gift to do, and the talent to be able to participate on a regular basis. I am taking care of myself. And I’ve been very blessed that I can compete at this level and at the top category with this type caliber horses.”

Long Range Toddy is a long shot at 30-1. The colt trained by Hall of Famer Steve Asmussen is 4 for 8 in his career, with Court aboard for the last two races, both at Oaklawn: a victory in the Rebel Stakes and a sixth-place finish in the Arkansas Derby.

“I had been told that he was kind and intelligent,” Court said of Long Range Toddy. “That impressed me. After working him, I realized he had the talent it would take to be running at the caliber level he’s racing at.”

This will be Court’s fourth Derby mount. His best finish was eighth aboard Will Take Charge in 2013.

He never abandoned hope he would make the sport’s biggest race.

But it a different kind of horsepower that could have ended Court’s career. He suffered a fractured collarbone last year in a motorcycle accident.

As to the future, Court hopes to go out on his own terms rather than be forced out by injury.

“As long as it feels good and I’m doing well, I’ll keep going,” Court said. “I’d like to be able to enjoy this industry as much as I have loved it and be able to step down gracefully at my timing.”

CHARLOTTE (AP) — Dale Earnhardt Jr. will work his first Kentucky Derby on Saturday as part of his expanding role with NBC Sports. The retired NASCAR superstar is also slated to cover his first Indianapolis 500 later this month.

Earnhardt will work alongside reporter Rutledge Wood at Churchill Downs as the duo roams the infield, Millionaires Row and interacts with fans in attendance. NASCAR’s 15-time most popular driver retired after the 2017 season and made his debut as an NBC Sports analyst last season.

The network has previously had Earnhardt report from the Super Bowl and last year’s Winter Olympics in Pyeongchang, South Korea.

“It’s a privilege that I don’t take for granted — NBC owns the rights to many great sporting events, and they are really good at finding opportunities to cross-pollinate,” Earnhardt told The Associated Press. “They don’t do it just to do it. It’s got to make sense. Ultimately it’s a great thing for our NASCAR on NBC coverage.”

In his debut in the NASCAR booth, Earnhardt was an instant hit because of his enthusiasm and practical knowledge of the sport. But transitioning to other events has been trickier for the two-time Daytona 500 winner because his entire life has revolved around NASCAR. Earnhardt is a rabid NFL fan, but is learning other sports with each new opportunity.

“Whether it be the Kentucky Derby or Indy 500 or Olympics, I’m a guest in their world. I want to know about them, respect them, and help our broadcast team tell their stories,” Earnhardt said. “When I went to Game 4 of the Stanley Cup Finals last year, it was my first year with NBC Sports and we hadn’t even begun the NASCAR on NBC part of the broadcast schedule, so I was nervous.

“The energy and the atmosphere really helped me. I realized quickly that I needed to soak it in, relax, and do a good job for my team. Even though this will be my first Kentucky Derby, I’m hoping a year under my belt with NBC Sports will help me.”

As for the Kentucky Derby, well, Earnhardt has been doing his homework. His wife is from Kentucky and has been a strong tutor, but he said he will stick to what he knows during Saturday’s telecast.

“I don’t have to pretend to be something I’m not,” he said. “I’m there for the first time, so that’s how I will be used — as a Kentucky Derby rookie, taking in the sights and sounds from Churchill Downs and talking to the fans there. At the end of the day it’s a race, and I love racing.”