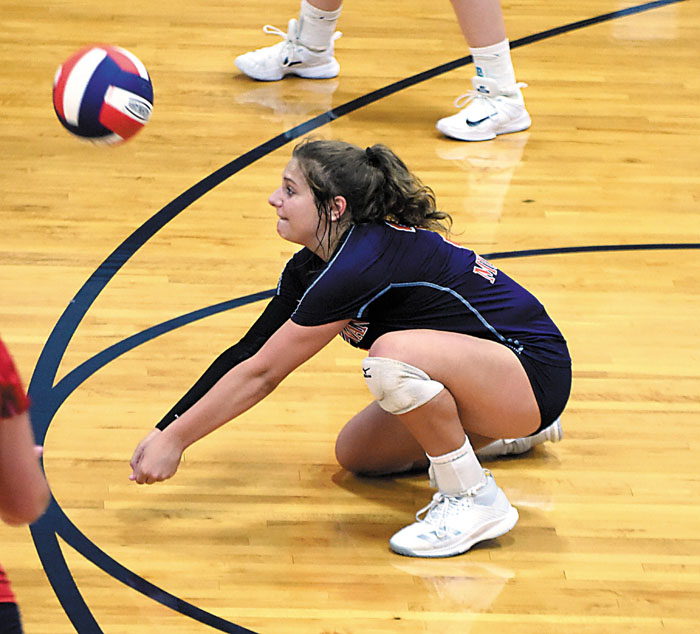 Wayne Hinshaw file photo/for the Salisbury Post ... East Rowan libero Baleigh Hill, shown during a match against West Rowan last September, has announced that she will continue her education and volleyball career at Barton College.

Hill looks shorter than that, but that’s because she plays a sport — volleyball — where a lot of girls are exceptionally tall.

Hill has always regarded her lack of height as an advantage, rather than an obstacle. She plays the libero position, that diving, digging defender who wears a jersey that’s a different color from her teammates, so her height doesn’t hurt.

She’s become such an efficient libero that she’ll continue her athletic and academic careers at Division II Barton College in Wilson, N.C.

“Being close to the floor really is an advantage when you’re a libero,” Hill said. “And there’s nothing more exciting in volleyball than for someone to hit the ball really hard, and you’re the one who gets it back up. Stopping the big kills, getting the crowd excited, that’s what a good libero can do.”

Hill got started early athletically. Her mother (Nicole) is fitness director at the East Rowan YMCA, so Hill was trying sports like basketball and soccer early in life.

But after her first Y volleyball league game as a sixth-grader, she knew she’d found her calling.

“From the start, I had a knack for getting a dig and making the pass to the setter,” Hill said. “So I stuck with volleyball.”

She got involved with High Rock Volleyball Club throughout middle school. She was ready for the varsity when she was an East freshman. She had four terrific seasons and made three all-county teams.

“Just an incredible defensive player,” East coach Sandy Lytton said. “Well over 1,000 digs for her career and I’m sure she’s broken all the records for digs at East Rowan. She’s been our team MVP, and she’s been all-conference for several years. She’s also a great person, smiling, caring and friendly. Barton is lucky to get her. Her impact will be immediate. She’ll be a great teammate, and she is ready to lead Barton defensively.”

By her senior season, Hill knew she wanted to play volleyball in college, but she’s also an outstanding student who aspires to be a dentist. Finding the right fit to follow both dreams wasn’t easy. Hill had serious discussions with 15 schools at all levels.

Some offered athletic money. Some didn’t.  The Hills found out college programs use most of their scholarship money on tall hitters. Libero recruits are usually at the bottom of the list.

But Hill was thrilled by Barton when she visited. She was surprised at the size of Wilson (almost 50,000 people).

“It has a  lot similarities with Salisbury,” Hill said. “I really like Salisbury, but I wanted to go away to college.”

Barton made an offer, and Hill verbally committed to the school early in her senior year. But she’d changed her mind by the end of  a volleyball season in which she led the Mustangs in digs (445) and serve receives (628). She averaged six digs per set.

By December, Hill had decided to focus on academics in college.

Things changed this spring. Hill re-committed to Barton. For one thing, Hill loves volleyball and didn’t want to walk away from it.

Hill’s family is close to the Hesters. Trish Hester coached Hill’s High Rock Volleyball Club teams for two years. Trish’s husband, Chip, is the head football coach at Barton, and that’s reassuring to the Hills to know that Baleigh will have someone in Wilson that she knows.

The Hills also are friends with the Hinceman family through daughters (Riley Hill and Leah Hinceman) who play club volleyball. Gabe Hinceman, a senior at East Rowan, is headed to Barton as a football recruit. That’s another person who can look out for Baleigh.

Barton made a lot of sense for a lot of reasons.

“I’m good in science,” said Hill, who is also a talented artist. “I plan to major in biology or chemistry. Hopefully, that will lead to dental school. I want to be a dentist because that’s a great way to help kids.”

There’s no doubt that Hill will thrive in the classroom. She also should do fine on the court.

“She’s just a great, little defensive player,” said Kelan Rogers, who has coached Hill in club ball and coached against her as Carson’s head coach. “She’s got a good head on her shoulders and reads the ball well. She’ll be a very good asset for Barton.”