HS tennis: Salisbury rolls in first round; 100 wins for Griffith 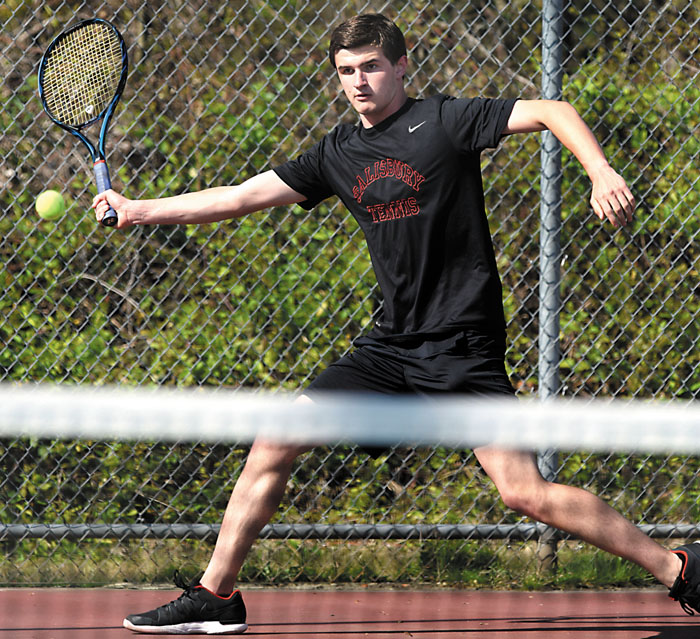 Wayne Hinshaw file photo/for the Salisbury Post ... Salisbury’s Roarke Burton, playing No. 1 singles, came from behind twice in his Wednesday match, defeating Forbush’s Matt Wilhelm, 1-6, 6-2 (10-6). The Hornets won the match, 6-0, in the first round of the state 2A dual team playoffs.

SALISBURY —Roarke Burton had to come back twice on Wednesday, but he did, and Salisbury’s boys tennis team rolled into the second round of the 2A dual team state playoffs.

“Forbush has a great No. 1 player, a kid we’ve seen before in regionals, and he was undefeated,” Salisbury coach Milton Griffith said. “But Roarke made the adjustments he needed to make. He wore him down some.”

In a decisive, third-set tiebreaker, Burton got behind again, 6-4, but he came back to take a 10-6 victory.

Salisbury defeated Forbush, 6-0, to give coach Milton Griffith his 100th victory in six seasons at the helm of the boys program. Salisbury (19-0) has lost only seven matches in that span.

Griffith received a small commemorative tennis racket with 100 on it after the match. He was appreciative of the gesture, but he downplayed the personal milestone, preferring to focus on the job of winning a playoff match against a team that had won six in a row.

“My focus wasn’t on getting that 100th win, it was on us playing well and beating a good team in a playoff match,” Griffith said. “But getting the 100th in the playoffs was meaningful. It was a nice way to get it.”

Burton’s teammates had a much easier time.

At No. 4, Leo Schiavinato won by injury default.

Forbush finished with a 13-5 record.

Salisbury’s top six will be involved in singles or doubles in this weekend’s individual regionals.

Salisbury will return to dual team playoff action at home next Tuesday against Mount Pleasant or Newton-Conover.

“We have a chance to make a run,” said Griffith, who took the Hornets to the regional final in 2018. “But we have to take it match by match.”