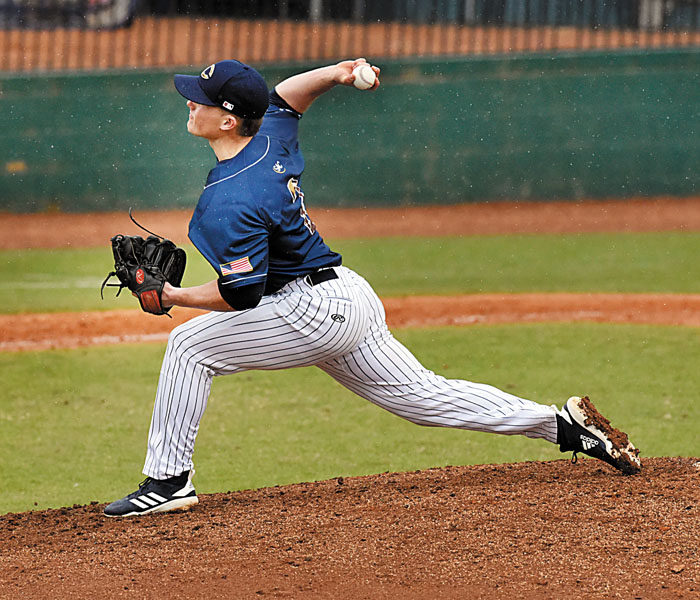 SALISBURY — Catawba pitcher Riley Myers was crushed when he was told at midseason he was being removed from the starting rotation.

“I’ve been a starter my whole life, so I was hurt and I was confused when I was told that was how it was going to be without a lot of explanation,” Myers said. “But my confusion only lasted for three or four days. Then I started realizing that as a reliever I would be pitching in several games every week, not just starting once. That turned out great for me and for the team. This is the perfect role for me.”

Shifting Myers, who starred at Salisbury High and for Rowan County American Legion, to the bullpen proved to be one of the key strategic moves of a long season. Once Myers embraced his new job, he was dominant. He has fearless grit, a 91 mph fastball and excellent command. He became the foundation of a bridge. He transported a lot of games from Catawba’s starters to lights-out closer Peyton Williams.

Everything worked the way it was supposed to for third-seeded Catawba pitching-wise in Monday’s 3-2 victory against top-seeded Newberry (41-14) in the South Atlantic Conference Tournament championship game.

Starter Sawyer Strickland persevered into the sixth, and Myers was there to pick him up with a key strikeout when he was summoned from the pen with two men on and two men out. Myers also breezed through the seventh and the eighth. Williams made things exciting in the ninth, but with runners at first and third, he retired SAC Player of the Year Danton Hyman to end the game.

“Peyton wasn’t going to give him anything to hit with second base open, but he chased a 1-and-0 pitch that was up,” Gantt said. “It was a routine fly ball to center. As soon as it went in the air, we knew it was over. Peyton didn’t have the stuff he had on Sunday, but he had enough.”

Catawba (42-12) went 4-0 in the double-elimination tournament. Myers pitched in his 27th game of the season for the surging Indians (42-12), who will take an eight-game winning streak into regional play. Williams notched his 10th save.

Bryan Ketchie pitched a complete game on Saturday, the tournament’s second day, but Myers and Williams were in there to finish things off on Friday, Sunday and Monday.

“Coach Gantt saw Williams and me in the hotel on Sunday and he said, ‘Y’all are good for Monday, right?’ We were good. At this point in the season, you’ve just got to go,” Myers said.

Strickland, a homeschooler who pitched in the 2016 World Series for Rowan County American Legion, is an interesting story. He didn’t do much at all his first two seasons at Catawba, posting ERAs of 12.46 and 8.31. He was all but forgotten, but he’s been huge as a junior. After winning the championship game, he’s 8-2.

“He’s more mature, he’s gotten more experience, and some of his teammates’ competitiveness has rubbed off on him,” Gantt said. “He’s come a long way.”

Strickland struggled in the bottom of the first, allowing two runs, one on his throwing error on a pickoff, but that was it. He got 17 outs against a terrific team, including nine on ground balls.

“What we asked of Sawyer was to give us a chance, and that’s what he did,” Myers said. “He put that first inning behind him and he just kept going and going. Just a very good job by him. The tension was through the roof today, but he handled it.”

Catawba didn’t have a big day at the plate, but the Indians bunched singles in the sixth inning to finally break through against Newberry hurler Josh Bookbinder, the SAC Freshman of the Year.

Lead-off man Bryce Butler’s speed help force a throwing error to start the top of the sixth. Heath Mitchem’s single to right put Indians on the corners. After Mitchem stole second, Jeremy Simpson walked to load the bases with none out.

Tournament MVP Hunter Shepherd’s single to right-center cut Catawba’s deficit to 2-1. Mitchem was able to score on Joe Butts’ bouncer to third to tie the game. Jackson Raper’s single to right gave Catawba a 3-2 lead. Catawba could have gotten more runs, but the Indians left the bases loaded.

“Our hitters may not have hit a lot today, but they hit when they needed to,” Myers said.

Three runs was enough. Strickland, Myers and Williams saw to that.

“Myers was really tough,” Gantt said. “He’s as competitive as it gets. He’s not a guy you ever have to pump up. You have to try to slow him down.”

Catawba likely clinched a regional berth on Saturday when it reached 40 wins, but now the Indians have removed any doubt. They are tournament champions and automatic regional qualifiers.

There’s a new regional format in place this year with a pair of three-team regionals in the Southeast, followed by a super regional, before teams head to Cary for the World Series.

There’s a chance Catawba could be one of the Southeast Regional hosts. Catawba was fourth in the regional poll released on April 24, but has gone 6-0 since then.

Regional selections will be announced May 12. Regional play starts May 16.

NOTES: Catawba’s victorious postgame meal was at McDonald’s. … Myers, who missed a whole season with a back injury, is a junior as far as baseball eligibility, but he’ll graduate in May. He’s looking at all his options as far as grad school and playing another year of baseball. … Shepherd, who won on the mound Sunday, finished a terrific tournament at the plate with a 2-for-4 effort on Monday. He was 9-for-15 in the tournament.