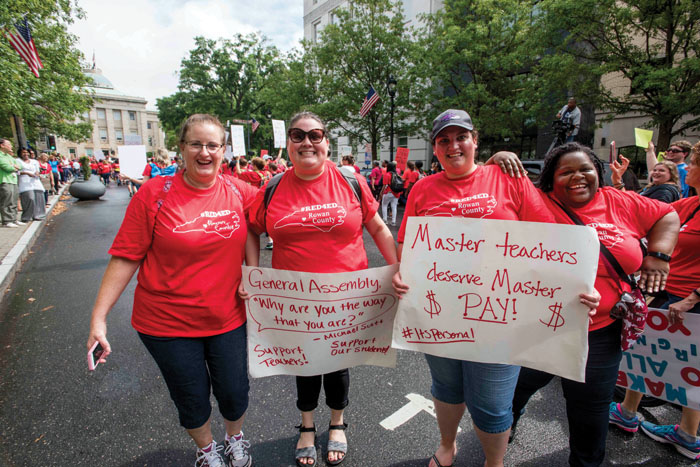 SALISBURY — With an educator-led teacher rally scheduled Wednesday in Raleigh, members of the Rowan-Salisbury Board of Education on Monday echoed the sentiments of board Chairman Josh Wagner and Superintendent Lynn Moody about whether to cancel classes for the day.

Yes, they are empathetic to the cause: issues including higher pay and additional support staff. What they couldn’t support, they said, is the timing of the effort.

Accordingly, the school system will proceed with operations as normal for the day despite districtwide requests from teachers to cancel classes.

“The timing is not good,” said board member Jean Kennedy, discussing the nearness to Rowan County’s spring break. “Our students will have been out six days, they come back two days, and then we want them out again?”

Kennedy herself attended a North Carolina Association of Educators rally during her time as an educator, but that rally was held on a Saturday.

Nothing, she said, would replace a teacher in a classroom ensuring students are covering what they should be.

“Other than that, as a retired educator, I would have absolutely no opposition to it,” she said.

“I certainly support them,” Cox said. “But I also support students. If this were announced at the beginning of the year so that we could plan for it in the calendar, no problem. But it hasn’t been handled that way.”

Board member Travis Allen said his background in law enforcement gave him an “outside, layman’s point of view.”

Many aspects of North Carolina’s education system need to be changed, Allen said, but calling for the changes in the middle of a school week seems like an attempt to “strong-arm the districts.”

He, too, expressed empathy with many complaints raised by educators involved in the rally, but he said closing schools does not seem the best fit for the cause.

“I’m a police officer. What if I decided I didn’t want to come to work? Or a fireman? Or the doctors, or nurses?” he said. “Nobody else can do that.”