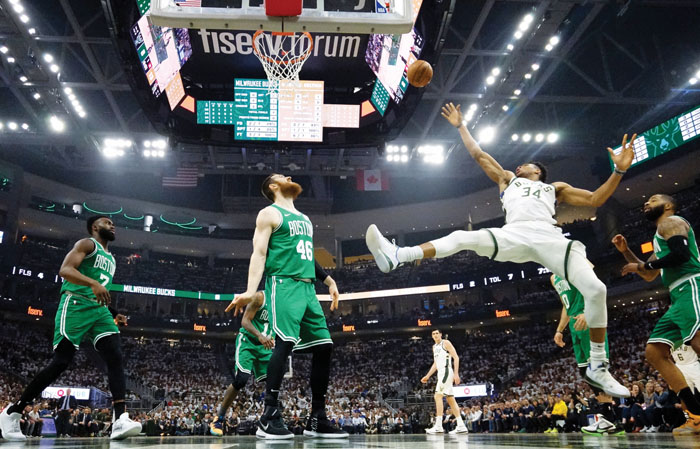 Milwaukee Bucks' Giannis Antetokounmpo shoots during the first half of Game 2 of a second round NBA basketball playoff series against the Boston Celtics Tuesday, April 30, 2019, in Milwaukee. (AP Photo/Morry Gash)

By CHARLES F. GARDNER Associated Press
MILWAUKEE (AP) — Giannis Antetokoumpo had 29 points and 10 rebounds, Khris Middleton made seven of Milwaukee’s 20 3-pointers, and the Bucks beat the Boston Celtics 123-102 on Tuesday night to even their second-round playoff series at a game apiece.
Antetokoumpo bounced back from a sub-par performance in Game 1, repeatedly attacking the rim with powerful drives to the basket. He went 7 for 16 from the floor and 13 of 18 at the foul line.
Middleton finished with 28 points for Milwaukee, which went 20 for 47 from beyond the arc. Eric Bledsoe added 21 points and five assists.
The Bucks led by as many as 31 points after a closely played opening half. Game 3 is Friday night in Boston.
Marcus Morris paced Boston with 17 points. Jaylen Brown had 16, and Al Horford finished with 15.
Kyrie Irving, who had 26 points and 11 assists in the Celtics’ 112-90 victory in the series opener, finished with nine points on 4-of-18 shooting in 31 minutes.
Milwaukee broke it open by outscoring Boston 39-18 in the third quarter. Antetokounmpo scored 15 points in the period, including a 3-pointer over Horford to give the Bucks an 81-71 lead with 5:33 left.
Antetokounmpo tipped in his own miss and made another 3 to help Milwaukee pull away. The Bucks went on a 24-2 run to carry a 98-73 lead into the fourth.
Brook Lopez and George Hill each finished with 10 points for Milwaukee. Pat Connaughton grabbed 11 rebounds to help the Bucks to a 54-45 advantage on the glass.
Antetokounmpo came out in an aggressive mode, getting to the foul line for eight attempts in the first quarter and making five. But he missed his only three field goal tries in the period.
Irving was 0 for 6 from the field but the Celtics moved the ball freely while taking a 30-25 lead after one quarter. Boston was 9 of 21 from the field and 9 of 10 at the line in the period.
Antetokounmpo scored his first basket on a powerful left-handed dunk that got the Bucks within two and had the crowd on its feet early in the second quarter.
Milwaukee led 59-55 at the break, fueled by 3-pointers from Middleton, Bledsoe and Hill. The Bucks outscored the Celtics 34-25 in the second quarter.
TIP-INS
Celtics: Morris started at forward for the second straight game in the series, with Horford at center. Backup center Aron Baynes was available after twisting his left ankle in Game 1 and played 10 minutes while picking up four fouls. Stevens said Baynes’ role would not change. “He will rotate off Giannis and their other bigs,” Stevens said before the game. . Boston has won five of six playoff series against Milwaukee, including the 1974 NBA Finals. The Celtics won that series in seven games, taking three of the four games played in Milwaukee.
Milwaukee: F Nikola Mirotic was in the starting lineup in place of Sterling Brown, who struggled in Game 1 and also experienced back spasms. Mirotic picked up two quick fouls guarding Jaylen Brown and was replaced by Connaughton with 8:43 left in the opening quarter.
UP NEXT
Game 3 is Friday night in Boston.