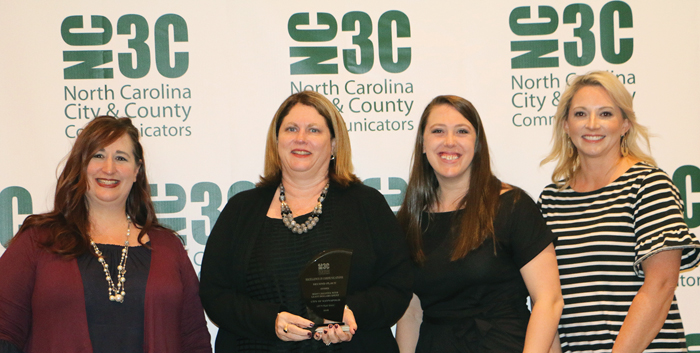 Kannapolis won two first-place awards in the categories of printed publications and marketing tools, and a second-place award for Most Creative Marketing for the Least Amount of Dollars Spent.

The awards were presented recently at NC3C’s spring conference in Durham. A total of 248 entries were received.

“Hearts and Heroes,” a video special on people saved from cardiac emergencies, was a second-place winner. Two more second-place honors were awarded in the videography and multiplatform campaign categories for “Storylines – Gifts of Life,” which features the story of Cabarrus Commissioner Lynn Shue’s two organ transplants, and the county’s work to deliver timely and transparent information on the 2019 budget process.

The city of Kannapolis received a first-place award in printed publications for the Village Park brochure, which highlights the amenities at the park and showcases the city’s Discover a Healthy Life brand.

The city also received first-place honors in the category of marketing tools for the National League of Cities Presentation. Kannapolis was invited to present its Downtown Revitalization Project to the National League of Cities during its fall 2018 conference. The presentation included the development of marketing tools such as a speech by Mayor Darrell Hinnant, a handout on the project and a PowerPoint presentation.

The city received a second-place award in the category of Most Creative Marketing Event for the Least Amount of Dollars Spent for the sports and entertainment venue groundbreaking. It celebrated construction of the venue and focused on the city’s commitment to invest downtown.

Judges for the Excellence in Communications Awards were communication professionals from the Texas Association of Municipal Information Officers and a variety of communications industries across the state.