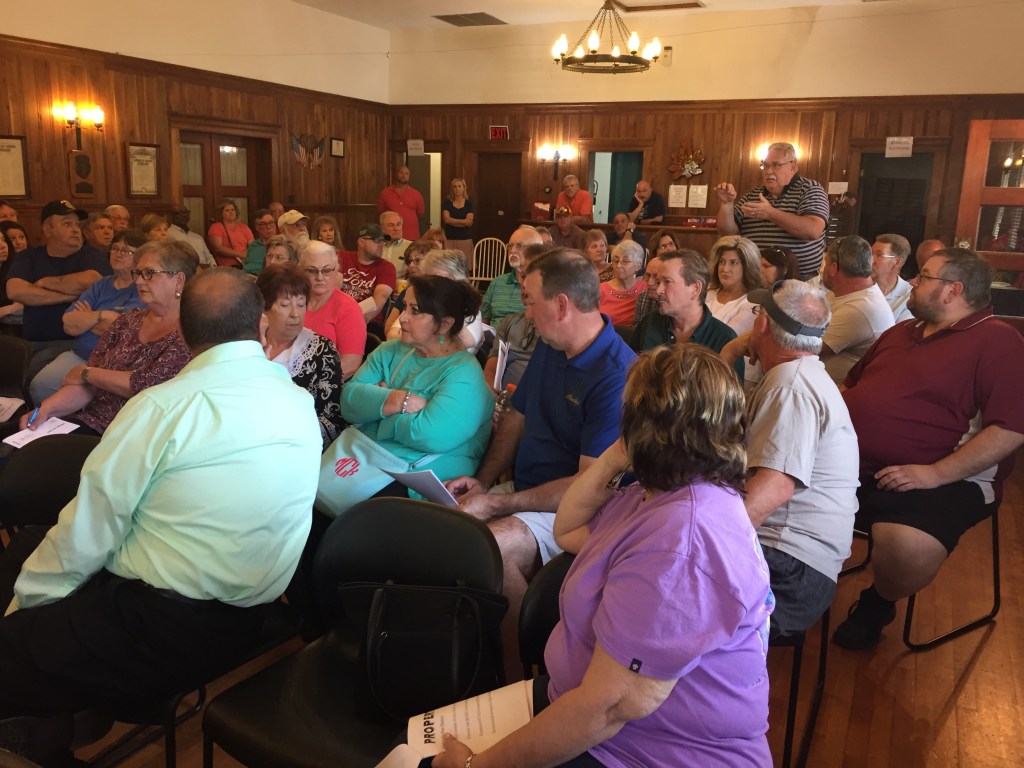 Over sixty residents gathered Sunday for the first meeting of the Concerned Citizens of Landis.

LANDIS — Though more than 60 people gathered Sunday afternoon at the Landis American Legion building, accommodations were suitable. The sound equipment functioned. The seating was plentiful. Participants were allowed to talk without time constraints.

Such was not the case at recent Board of Aldermen meetings, said those in attendance Sunday. And this grievance was one of many raised during the gathering, labeled the first meeting of the Concerned Citizens of Landis. It also produced the first declared candidate in the 2019 Landis Board of Aldermen race — Katie Sells.

Just where any embezzled money came from has remained question No. 1 for residents, with many calling into question unusually high water, sewer and power bills compared to those for similar-sized homes in neighboring communities.

Meredith Smith and Sells, residents of Landis and organizers of the meeting, said talks with town officials had provided no answer as to why rates remain high.

“Kenny (Isenhour, interim town manager) said we make no money off of water,” said Smith. “If anything, we lose money.”

Smith said she had asked why the town couldn’t look into purchasing water from Salisbury-Rowan Utilities rather than Kannapolis and was told that the quality of water would suffer because of the distance.

“Once it gets here, it’s not drinkable; the quality of water isn’t right,” she said. “Of course, this is not current people telling this scenario.”

“North Carolina is doing a lot of things that make it difficult for small communities to stay in the water and sewer business,” Isenhour said.

Smaller municipalities are being forced into larger co-ops, and customers feel the resulting increase in costs as it filtered down the pipeline. A similar cooperative situation could be seen in the town’s electric utility.

But residents continued to raise eyebrows at their bills. Many came with the mailed slips in hand, citing conspicuous decreases in documented power usage since the state began its investigation.

As residents discussed the possibility of inflated billing, many wanted to know whether a rebate or refund would be issued once the town recoups its losses.

One audience member said it’s not necessarily about getting money back. Rather, it is important to know what the town will do with money once it is returned.

Smith said the town has insurance that covers fraud and embezzlement, and that a claim would likely be submitted. She also said the board is reinstating practices that would prevent abuse of town finances — requiring purchase orders, getting rid of town credit cards and creating limited expenditure cards.

Town board and staff

Hearing about the new accountability practices, residents asked how the standards had slipped out of use.

Many faulted the current board for allowing lax practices and turning a “blind eye” to questionable behavior. For many, the solution would be removing these individuals from office.

Sells said she had discussed petitioning for the resignation of the mayor with the Local Government Commission, only to be told time wouldn’t allow for the effort before the November election.

The solution, she said, is to vote for two new aldermen and a mayor this fall, and Sells said she is putting her hat in the ring for alderwoman.

“I hope I won’t be taking the position because of all that’s happened,” Sells said. “I feel that people aren’t represented on the board, and I want to provide that. I’m not a ‘yes’ person. I’ll be there asking questions if something doesn’t seem right.”

Smith said she hopes the town will institute a hiring freeze until new board members are in office.

“Right now, if they decide to start hiring people, it’s with the same board that let us down,” she said.

As talks continued, the list of grievances with existing board members lengthened. People said they feel as though public comments during board meetings are wasted efforts, that board members come to meetings with their minds set on decisions.

Other people have missed the opportunity to comment altogether because of the overcrowded meeting space, strict and newly adopted standards for speaking, and inadequate audio, they said.

Smith said many local schools had offered to host the monthly meetings, but board members were not interested in moving the meetings, citing the necessary sound equipment rentals as cost-prohibitive.

Smith and Sells agreed to continue to approach board members about increasing accessibility of town meetings, helping to further ensure accountability and transparency.

Suggestions included not just a relocation but broadcasting the meetings on local television stations or through digital media.

“We’re here to take notes and ask questions for you,” Smith said.

“They hate to see me and Meredith come, but we’re there to ask questions,” Sells said.

School board to discuss fate of mobile units