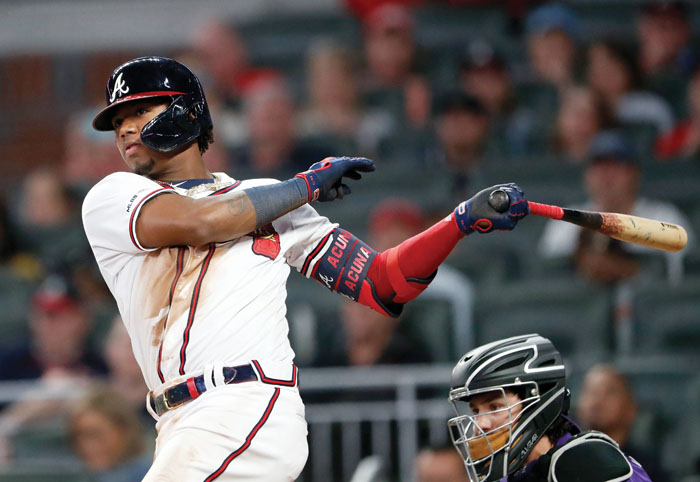 Atlanta Braves' Ronald Acuna Jr., left, drives in two runs with a base hit in the fifth inning of a baseball game against the Colorado Rockies, Saturday, April 27, 2019, in Atlanta. (AP Photo/John Bazemore)

SAN FRANCISCO (AP) — Gary Sanchez hit his first career grand slam in a five-run fifth inning for his first hit following nearly two weeks on the injured list, and the New York Yankees beat the San Francisco Giants 6-4 on Saturday for their 10th win in 12 games.

Sanchez had been 0 for 9 with seven strikeouts since returning Wednesday from a strained left calf. His batting average down to .220, he crushed a high sinker from Derek Holland (1-4) that traveled 467 feet deep into the left-field seats for a 6-0 lead.

BOSTON (AP) — Yandy Diaz hit the second pitch from David Price (1-2) over the Green Monster and Mike Zunino added a fourth-inning RBI single off the Monster for the AL East-leading Rays.

Charlie Morton (3-0) gave up two hits in six shutout innings. Five relievers completed a five-hitter, with Emilio Pagan pitching the ninth for his third save.

MINNEAPOLIS (AP) — Minnesota hit five home runs off Baltimore for the second straight day, including a pair by Max Kepler.

C.J. Cron, Jason Castro and Marwin Gonzalez also homered for the Twins, who have 21 home runs against the Orioles this year while going 5-0.

Baltimore has given up 69 homers in 28 games, a pace that projects to 399 for the season.

ST. LOUIS (AP) — Marcell Ozuna hit a three-run homer and drove in five runs. Ozuna’s 10th home run of the season came after the Reds took a 2-0 lead in the

Dakota Hudson (2-1) allowed three runs and seven hits in 5 2/3 innings, and Jordan Hicks pitched a scoreless ninth for his eighth save.

Six days after leaving a last start with a broken fingernail, Aaron Sanchez (3-1) gave up an unearned run and two hits in five inning

HOUSTON (AP) — Pinch-hitter Tony Kemp had a 10th-inning homer off Adam Cimber (2-2) that traveled just inside the right-field foul pole..

Garcia’s first RBI this season gave San Diego a 3-2 lead against Wander Suero (1-3), who was charged with four runs.

Luis Perdomo (1-0) struck out the side in the ninth in his second appearance this season.

ATLANTA (AP) — Charlie Blackmon hit a go-ahead, two-run double, Trevor Story followed with a three-run homer during a ninth-inning rally and the Colorado Rockies beat the Atlanta Braves 9-5 on Saturday night for their 10th win in 12 games.

Nolan Arenado hit a second-inning home run for the Rockies.

Atlanta led 5-4 when David Dahl led off the ninth with a double off Minter (0-3) and advanced on a wild pitch. Minter walked Ian Desmond with two outs and a full count and Drew Butera on four pitches, and Blackmon doubled to right for a 6-5. Story fell behind 0-2 in the count, then drove a curveball 429 feet to left, a ball 106 mph off the bat.

Braves starter Mike Foltynewicz came off the injured list before the game after being sidelined since spring training with a right elbow bone spur. A 2018 All-Star, Foltynewicz gave up four runs and six hits in six innings, including solo homers to Arenado in the second and Daniel Murphy in the fourth.

Freddie Freeman homered in the first, Arenado’s home run tied the score and Ender Inciarte’s homer put Atlanta ahead 2-1 in the second. Murphy’s first home run for the Rockies tied the score 2-2 in the third.

Atlanta took a 5-2 lead in the fifth when Ronald Acuña Jr. hit a two-run single and scored on Nick Markakis’ double.

Ryan McMahon hit an RBI single in the seventh off Foltynewicz and scored when Tony Wolters grounded out against Luke Jackson.

Story extended his career-best hitting streak to 15 games. … Freeman has reached safely in all 26 games. His streak is the second-best in Atlanta history to begin a season, behind J.D. Drew’s 27-game streak in 2004. Hall of Famer Eddie Mathews set the franchise mark of 37 in 1961 with the Milwaukee Braves.,

Colorado has won eight straight at Atlanta, tying the team record for consecutive road wins at an opponent set in 2011-12 at the New York Mets.

Rockies: LHP Kyle Freeland (blister in left middle finger) is expected to come off the 10-day injured list and start Monday at Milwaukee.

Braves: LHP Jesse Biddle was placed on the 10-day injured list with a bruised right thigh and groin strain.

Rockies: LHP Tyler Anderson (0-0, 12.00 ERA) has allowed 16 runs and 28 baserunners in 12 innings, a span of three starts this year. Anderson will make his second career start against Atlanta.

Braves: RHP Kevin Gausman (1-2, 3.96 ERA) will face Colorado for the first time in his career.