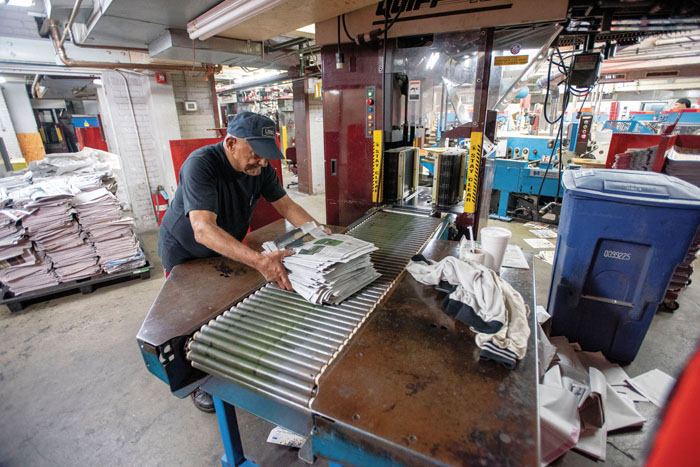 SALISBURY — Hodge Evans has been a part of the Salisbury Post since before he could walk.

Now, at 84, he’s retiring again as the Post shifts its printing to Winston-Salem.

Hodge has been in the newspaper’s mailroom for more years than he can count. The mailroom is where sections of the paper are put together, inserts added and stacks for carriers are bundled. It’s a hive of activity, humming in the middle of the night.

Hodge’s father, Robert Evans, had a paper route, and he took Hodge, and sometimes one of his brothers, along in the wagon he pulled with the papers. The senior Evans was also a janitor in advertising and bookkeeping at the Post’s main office; Hodge helped him out when he was big enough.

Hodge is the last of four boys; Fred, Warren and Walter have passed away.

Hodge remembers when his father managed some boys to deliver papers on the east side of town. Garland Gaither, another man who spent his life involved with the paper, organized carriers on the west side. The late Pete Davis cleaned the composing room, a messy place in the hot-type days of molten lead, and took advertisements to customers to be proofed. Gaither also lit the pot holding the lead each day; Davis kept it going and poured the lead into the machines.

Hodge remembers there were only three people working in the mailroom in the days before inserts and large, clanking and complicated machines.

“When the inserts came in, the ladies came in,“ Hodge recalled.

The ladies were sisters Ann, Millie and Sally Helms and Joyce Smith, and they did all the inserting by hand. He said the first insert that came to the Post was a flier for Winn-Dixie. The inserts were so new that the Hurleys, former owners of the Post, weren’t sure what to charge for them, Hodge said.

Robert “Bobo” James “taught me everything I know,” Hodge says with a laugh.

“One day he told me, ‘Think for yourself,’” Hodge recalled. “I called him my white daddy. Bo was a good guy.”

Hodge thinks he’s seen four or five new presses in his time. He started out with hot type, when melted lead was formed into letters that went into a form holding all the letters of all the words on each page. With computers, the process has changed so much now he can’t believe it.

Hodge praised the Hurley family, who first employed him. They were good to their employees, he says. James Hurley, affectionately known as “Old Man Hurley,” gave Hodge a tip to buy Food Lion (then Food Town) stock early on and even offered to loan him money, “but I never did it. I’d be sittin’ pretty now.”

One time, Hurley called Hodge into his office. It was during the civil rights era, and he told Hodge, “I’m not used to it, but I might as well get used to it because it’s the law.”

The Hurleys shared their profits in those days and had an annual banquet for employees. Hurley booked the Yadkin Hotel, Hodge remembers, and there was a question about where the black employees would eat.

“Mr. Hurley said he was renting the space, and it was his for that time and he could invite whoever he wanted,” so they all ate together, Hodge recalled. “The Hurleys were good people to work for. I had a chance at other jobs, but …”

When Hodge’s mother was sick, he needed to take time off to help her. “And I kept my pay. They told me it was all right and I could go home whenever I needed to. If you went to work somewhere else, you wouldn’t have that good relationship.”

Hodge remembers that college boys worked in the mailroom before he came. They were students from Catawba and Livingstone who worked to make money for school. His brother, Warren, was the first black employee not to have a janitor’s role, he says.

The biggest change at the Post, Hodge said, was going to cold type. With the lead gone, the linotype machines went silent. It was a new process that involved different equipment.

In the early days, he said, the pressroom had so much ink floating in the air that the pressmen would blow their noses and turn their handkerchiefs black. The mailroom was a little better.

On days when big news happened, the Hurleys always allowed more pages, Hodge recalled. And when there was a big murder case in Kannapolis, the Post printed an extra edition and sent people to Kannapolis to sell papers on the street.

“When World War II ended, that was a special,” Hodge added.

One of the biggest news days was when Albert Stout, a black State Bureau of Investigation agent, was seriously injured when a bomb blew up his car.

Another big day was the John F. Kennedy assassination, and Martin Luther King’s, too.

The mailroom has always worked together to get big packages of inserts out on Thanksgiving and around Christmas. Part of those papers had to be put together the day before, then inserted the next day, Hodge recalled.

“Everyone in the building helped out,” he said.

Rolls of newsprint were smaller in those days. One day, a delivery truck was coming with new rolls and one fell off the truck and started rolling down the street. A number of employees chased after it and finally stopped it.

In those days, everything was local, and the Post was in the middle of it, Hodge says. Downtown was full and busy, and everyone knew everyone else.

There was no plastic wrapper in the early days. If it rained, workers wrapped the daily paper in old newspapers. When customers brought it in from the rain, they baked it to dry it out. Hodge remembers “all those rubber bands” that held the papers together.

“It taught kids business, how to manage money and keep books and meet the public,” he said.

Now, he says, kids don’t have anything to do.

He remembers a section of the paper called “Negro News” about the black community.

When the marriage of delivery manager Gaither’s daughter was announced in the paper, “I think that was the first black woman in a wedding announcement,” he said.

Hodge first retired in 2000, but he came back to boost his income and have something to do.

When he talks about his years at the Post, he says again and again, “It was a good experience. It’s been great working here. We were like family.”