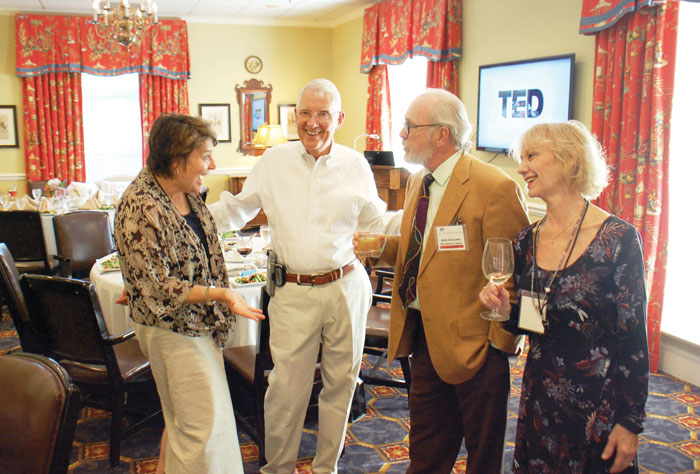 Mark Wineka/Salisbury Post From left, Joyce Caron-Mercier, Bays Shoaf, Bob Paolino and Joan Palmer socialize before a recent meeting of the Salisbury Sales and Marketing Executives Association, which meets regularly for dinner and programs at the Country Club of Salisbury. The local organization formed in 1957.

SALISBURY — Even though she’s an executive director of a nonprofit agency, the Pregnancy Support Center, Shari Evans finds a lot of value being a member of the Salisbury Sales and Marketing Executives Association.

“I sell a product, I sell a mission,” Evans told fellow members Wednesday night at their April meeting.

So as part of the evening’s program, Evans shared with the group an 18-minute “Ted Talk” by Simon Sinek on what he describes as the Golden Circle, or the importance for a business or individuals to find their whys.

What’s their purpose? Why do they get out of bed in the morning? Why do they care? Essentially, Sinek asks in his presentation, what is your why?

“People don’t buy what you do,'” Sinek says in the program. “They buy why you do it.”

Why did Apple, which is simply a computer company, excel in selling computers and other items?

Why, out of all the people in the country, was Dr. Martin Luther King Jr. the right man for his time to lead the civil rights movement?

Why did the Wright Brothers succeed in figuring out man-powered flight when so many others were trying to be first in flight, too?

Those who start with “why” have the ability to inspire people around them, Sinek said, noting that King, for example, didn’t deliver an “I Have a Plan” speech but an “I Have a Dream” message — his why.

After the video, Evans told the group that with her career, the why is that every life has a purpose and value. She said she hopes Sinek’s talk was valuable and gave the group things to think and talk about.

For several minutes to follow, members at the two dinner tables conversed casually with each other about their own whys.

Before the evening adjourned, longtime member Joan Palmer shared with the whole group the why behind her business, Palmers’ Promotions.

It comes down to her love of people, getting to meet and know them and knowing that “my business is about helping your business,” she said.

Juanita Miller of Hairston Funeral Home does a lot with antiques, estate planning and helping families deal with loss. “I do what I do because I love it,” she said.

Wednesday’s meeting typified what the Salisbury Sales and Marketing Executives Association has been about since 1957. It basically comes down to networking — and learning.

The group meets every fourth Wednesday at the Country Club of Salisbury. The evening starts about 5:30 p.m. with time to grab a drink and socialize. Dinner is served at 6 p.m, and the program starts about 6:30 p.m.

“There’s no pressure,” Palmer said. “We love having guests. We love having new members come and join, and we’re a very welcoming group.”

“You get close to these people,” said Paolino, who, like Palmer, is a longtime member and past president. “You see them about every month, and it’s a good place to get business done in a casual setting.”

Palmer, whose late father, Hank Palmer, was one of the original members, appreciates the continuity of the organization, the history of it and benefiting from the shared knowledge of all the interesting people who have participated.

“I think our programs are great,” she added. “I’ve learned a lot in marketing — and other things.”

People such as Food Town’s (now Food Lion’s) Ralph Ketner and Wilson Smith and Cheerwine’s Clifford Peeler were among the founders of the Salisbury Sales & Marketing Club in 1957.

“Back then, it was a big deal,” Joan Palmer said.

Today, the group is smaller but no less enthusiastic. The association continues to have interesting guest speakers and sometimes panel discussions on business trends.

“We have a really good core,” said Palmer, who is the membership chairperson this year.

Annual membership costs $300, and that covers at least eight meetings a year, dinners and cocktails. The group also has Christmas and summer parties.

“We have the best Christmas parties,” Palmer said.

Membership in the national organization eventually became too expensive, so the group is on its own.

The monthly meetings now have sponsors. Paolino’s bowling center filled that role Wednesday night. At each member’s dinner place, Paolino left a copy of the Salisbury the Magazine issue that included a feature on Woodleaf Lanes.

An envelope tucked in with the story included two bonus bucks for the bowling center, a gift card for an hour of free bowling for as many as six people and an offer for an additional hour for just $20.

Paolino also took the opportunity to tell the group about his Kids Bowl Free summer program, family packages, and the birthday and corporate parties always available.

Hey, it’s all about sales and marketing — and networking.

If you are interested in finding out more about the Salisbury Sales and Marketing Executives Association, contact Joan Palmer at 704-633-1317 or joan@hankpalmer.com.