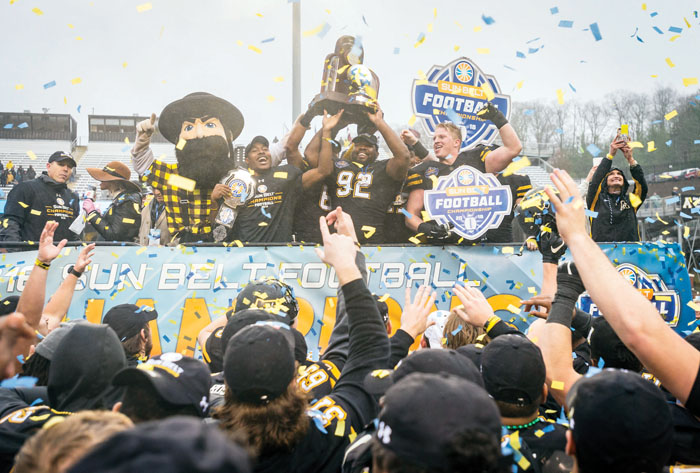 BOONE — Five recent alums of the Appalachian State football team took the next step in their football journeys by signing free agent deals with NFL teams upon the conclusion of the 2019 NFL draft on Saturday.

Clifton Duck signed with the Chicago Bears, Austin Exford with the Houston Texans, Tae Hayes with the Jacksonville Jaguars, Jalin Moore with the New York Jets and MyQuon Stout with the Jets.

A two-time team captain and three-year starter at nose tackle, Stout was the leader of a defense that ranked No. 4 nationally by allowing just 15.5 points per game in 2018. The Salisbury native and Carson High School product earned first-team All-Sun Belt honors as a senior and finished his career with 88 tackles, 3.5 sacks, 8.5 tackles for loss and one fumble recovery.

The Mountaineers already led Sun Belt Conference programs with nine alums currently on NFL rosters, and this quintet will look to add to that total.

Duck, a Matthews native, completed his 2018 junior season by being named a first-team All-Sun Belt cornerback for the third time. The 2016 Sun Belt Freshman of the Year who helped App State rank among the nation’s most turnover-happy defenses, he intercepted 12 passes, made 158 tackles and totaled 324 punt return yards over his three seasons as a starter.

Exford excelled as both a hard-hitting standout on several special teams units as well as a safety who was named first-team All-Sun Belt by the PFF College site last fall. The Snellville, Ga., native played in 41 career games and totaled 102 tackles, three fumble recoveries, one forced fumble, one interception, one sack, and a defensive touchdown.

Hayes, from Decatur, Ala., was a three-year starter at cornerback with 33 career passes defended, including nine interceptions. He earned All-Sun Belt honors as both a junior and senior. In his four seasons, App State’s 73 interceptions tied San Diego State for the national lead during that span.

During his App State career, Moore rushed for 3,570 yards (No. 6 in school history), averaged a school-record 6.13 yards per carry and scored 34 total touchdowns. The two-time Sun Belt rushing champion with back-to-back seasons of 1,000-plus yards had four games with at least 235 rushing yards in his career, and the ability to squat 650 pounds contributed to him being No. 1 among running backs on NFL.com’s 18-player list of “college football’s most freakish athletes” in 2018.

A native of Shelby, Moore suffered a season-ending ankle fracture and dislocation on Oct. 9 but, in part because of the dedication he showed during his rehab process, received the first official invitation to the Reese’s Senior Bowl. He later attended the NFL Scouting Combine in Indianapolis, where he ranked No. 2 among the 28 invited running backs with 27 reps on the 225-pound bench press, and then went through on-field drills in front of NFL personnel during App State’s Pro Day earlier this month.