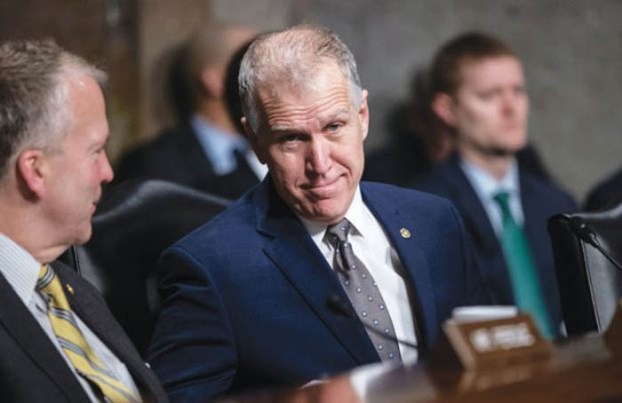 Math favors Senate Democrats in 2020, but GOP is counting on coattails

WASHINGTON — A sprawling field of Democratic presidential candidates have spent months proffering ambitious policy proposals — from universal health care to an expanded Supreme Court — while debating whether they would eliminate the Senate filibuster to implement them with a simple majority vote.

But there’s a catch: There’s a good chance they may not have a Democratic Senate, period.

While the 2020 Senate landscape is more favorable to Democrats than in the brutal 2018 midterms, where they saw a net loss of two seats despite a massive surge in national Democratic turnout, the uncertainties of the presidential race and a long decline in ticket-splitting offer them only a narrow path to winning a majority next year.

Currently holding a 53-47 advantage, Republicans are defending far more seats next year — 22 — than the Democrats’ 12. But only two of those seats — in Maine and Colorado — are in states Hillary Clinton won in 2016. Democrats, meanwhile, have to defend two seats in states Donald Trump won — Alabama and Michigan.

Democrats are nowhere near completing their recruiting efforts for 2020, and some key potential candidates who could upend individual races — such as former Georgia House minority leader Stacey Abrams — remain undecided. Furthermore, a presidential blowout by the eventual Democratic presidential nominee could greatly expand the number of GOP Senate seats at risk.

Senate Minority Leader Charles Schumer, who has met with multiple potential candidates in recent months, said in an interview that Democrats have seen “tremendous enthusiasm” among voters, donors and possible hopefuls.

“They realize that even should we have a Democratic president and keep a Democratic House that Mitch McConnell as majority leader will block everything the middle class needs,” he said.

But Republicans, who would have a bulwark in the Senate if Democrats could pull off the feat of ousting President Trump and holding the House, have been encouraged by strong fundraising and aggressive campaigns by incumbents, as well as unsettled Democratic fields in key states including North Carolina.

“We’re not people who are prone to seeing rosy scenarios, but it’s hard to see how this first four months of the cycle could go any better for us,” said Steven Law, president of the Senate Leadership Fund, a GOP super PAC allied with McConnell that spent nearly $130 million on 2018 races.

There are potential pitfalls for Republicans: Several GOP strategists said they are on guard for problematic primaries in Alabama and Kansas that could complicate what should otherwise be straightforward GOP wins — particularly if – Roy Moore, the former Alabama Supreme Court justice, and Kris Kobach, the former Kansas attorney general, decide to run.

Moore lost to Democrat Doug Jones in a 2017 special election amid accusations that he had sexually assaulted underage girls in the late 1970s. He said in a radio interview last month that he was “seriously considering” another run. Kobach lost his race for governor last year to Democrat Laura Kelly, and he has struggled to win votes in suburban areas of his state because of his hard-right views on immigration, voting rights and fiscal policy. Despite close ties to Trump, national GOP operatives see him imperiling the typically safe Republican seat being vacated by Sen. Pat Roberts after four terms.

“He’s Kansas’ Roy Moore in terms of what that does in that race,” said a senior Republican adviser who spoke on the condition of anonymity.

McConnell has aggressively recruited Secretary of State Mike Pompeo, a former Kansas congressman, for that seat, although Pompeo has brushed off the entreaties. According to two Republican officials familiar with his thinking, McConnell believes it is unlikely Pompeo will run, barring a significant change in circumstance, but has made it clear to Pompeo that he would be welcome to join the race at any point before the filing deadline next June.

While perceptions of Trump and his administration drove last year’s split midterm results, with 40-plus House gains for Democrats and an incremental Senate gain for Republicans, the 2020 congressional races largely will be dictated by presidential politics. And history suggests it is becoming increasingly difficult for Senate candidates to separate their fates from the top of the ticket.

In 2016, not a single state gave its presidential electoral votes and its Senate seat to candidates of different parties after six states did so in 2008 and five states did in 2012. Incumbents still generally tend to enjoy an advantage over the top of the ticket, but strategists and political scientists see that trend fading.

The question for 2020 Senate races could be whether the presidential electoral map remains fairly close to the 2016 results — where Trump wins or a Democrat prevails with a few states such as Michigan, Pennsylvania and Wisconsin deciding the final outcome — or whether a landslide scenario opens up opportunities for Democrats in historically red states like Georgia and Texas.

Top Democratic officials say they are seeing encouraging signs and that they expect the political landscape to look more like the 2018 “blue wave” than the stunning 2016 results.

Law, the Republican super PAC chief, said, however, that 2020 stands to be “highly analogous” to 2016, where well-prepared incumbents were able to ride Trump’s coattails in North Carolina, Pennsylvania and Wisconsin. Early polling, he said, shows more even levels of voter enthusiasm between the parties than in 2018, where Democrats held a clear advantage.

“The president may not need to win in Colorado or a couple of these other states, but he’s going to have to certainly be close to it to make sure that we re-elect our incumbents,” Law said.

Democratic hopes for the Senate majority start in Colorado, where Republican Sen. Cory Gardner is seeking a second term in a state that has turned sharply toward Democrats since Trump’s election. Last year, liberal Democrat Jared Polis won a nearly 11-point victory in that state’s marquee governor race, and polls show Trump’s approval ratings mired in the 30s.

Sen. Catherine Cortez Masto, D-Nev., chairman of the Democratic Senatorial Campaign Committee, said she is not concerned about the unsettled fields in Colorado and other states.

In Maine, GOP Sen. Susan Collins is seeking a fifth term, with national Democrats eager to undermine her carefully tended moderate image after she voted for Trump’s Supreme Court nominees and for his tax bill. But she has no serious challenger yet, though national Democrats are expecting either state House Speaker Sara Gideon or former state House Speaker Hannah Pingree to step up in the coming months.

Democrats are also eying Arizona, where GOP Sen. Martha McSally is running a second consecutive race after losing to Democrat Kyrsten Sinema last year before Republican Gov. Doug Ducey appointed her to replace the late Sen. John McCain. Former astronaut and current gun-control activist Mark Kelly is expected to clinch the Democratic nomination after Rep. Ruben Gallego passed on a run. Republicans are hopeful that, without the pressures of a GOP primary, McSally will run a more disciplined and appealing campaign in 2020. They also believe that Kelly is vulnerable to concerted attacks on paid corporate speeches he has given since leaving NASA.

Further Democratic gains get tougher from there, with pickup opportunities largely dependent on the presidential map. Iowa Sen. Joni Ernst, for instance, could be vulnerable if her state swings back to Democrats after voting for Trump by 10 points in 2016. But Ernst has already raised $1.7 million, and she does not have a breakout Democratic challenger. Former Iowa Gov. and Agriculture Secretary Tom Vilsack passed on a run, and Democratic Reps. Cindy Axne and Abby Finkenauer are under pressure to hold their House seats.

Another potentially vulnerable GOP incumbent is North Carolina Sen. Thom Tillis, who vexed conservatives this year by first opposing and then supporting Trump’s border-emergency declaration, prompting talk of a primary challenge from the right. That talk seems to have dissipated, but he still faces the challenge of needing to run ahead of Trump in a state likely to be a prime presidential battleground.

Democrats are still in search of a top-tier candidate: State Attorney General Josh Stein has declined to run, to the dismay of national Democrats, but they are hopeful state Sen. Jeff Jackson of Mecklenburg County, an Army veteran and former prosecutor, jumps in.

In Georgia, strategists of both parties believe that Abrams alone could upend GOP Sen. David Perdue’s bid for a second term. But despite a full-court press from Schumer and other Democrats, Abrams is still entertaining whether to instead launch a presidential bid after her 2018 campaign for governor fell narrowly short.

Perdue, who has stuck closely to Trump, raised almost $2 million in the first three months of 2019. He said in a brief interview that he is prepared whether Abrams runs and suggested he is ready to paint any opponent as too liberal for the state.

“Regardless of who they put up, that person, if they were to end up in the Senate, would be nothing but a rubber stamp for this left-wing radical proposition that is being put forth right now,” Perdue said. “And I can tell you … the road to socialism is not going to run through the state of Georgia.”

An even bigger stretch for Democrats is Texas, where Republican Sen. John Cornyn is seeking a fourth term. Former Congressman Beto O’Rourke, who nearly knocked off GOP Sen. Ted Cruz last year, opted to seek the presidency instead of mounting a second Senate run. Democratic Rep. Joaquin Castro is expected to announce soon whether he will run, but it remains to be seen whether he or MJ Hegar, who entered the race this month after a strong but unsuccessful 2018 House campaign, can generate a fraction of the enthusiasm O’Rourke did.

Meanwhile, GOP strategists believe they have an opportunity to unseat Democratic Sen. Gary Peters in Michigan, particularly if businessman John James enters the race. Peters, a first-term incumbent, is relatively unknown in the state, and James mounted a surprisingly close challenge to Sen. Debbie Stabenow last year. But James has not decided if he will challenge Peters, seek a House seat, or remain on the sidelines, and it remains unclear to what degree James could outpace Trump, who narrowly won the state in 2016 and now faces deep skepticism among voters there.

Another potential Republican pickup is New Hampshire, where GOP operatives have fading hopes that popular Gov. Chris Sununu might take on two-term Democratic incumbent Sen. Jeanne Shaheen in a state that Trump narrowly lost in 2016.