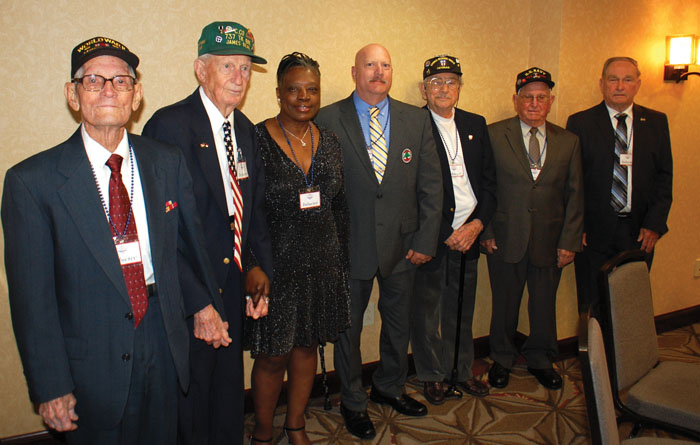 CONCORD — In Vietnam, Coy Thompson received the Silver Star after the Huey helicopter he was crew chief for rescued 52 men trapped by the Vietcong.

As a Marine in 1983, Dominic Darconte’s peacekeeping force in Lebanon encountered small arms fire and shelling from RPGs at the Beirut Airport. A grenade blast threw him down and hurt both his knees.

At the same time, on the other side of the globe, Glenn Hoffner served on LSTs in Pacific Theater, making sure tanks, vehicles, supplies and troops got from ship to shore.

Robert Hartman’s destroyer took a hit from a Japanese kamikaze plane, which killed 14 of his shipmates in World War II.

Born in Kannapolis, William Hill also was a Navy man. He and his fellow crewmen were among the witnesses to the signing of the Japanese surrender aboard the USS Missouri.

Thelma Luckey and Tom Harrell are both military veterans, but the real feathers in their caps have come after their service, particularly the work they have done together in providing the Frontier Coffee Shop for veterans Tuesday mornings in Salisbury.

Then there’s James Deal, who served in one of Gen. George Patton’s tanker battalions in the Third Army campaigns through Northern France, Normandy, the Rhineland and Central Europe.

Shrapnel from a mine tore through both of his thighs toward the end of the war.

These are just some of the things you hear from military veterans or their families when you attend an induction ceremony of the N.C. Military Veterans Hall of Fame.

Thompson, Darconte, Fisher, Hoffner, the late Hartman, Hill, Luckey, Harrell and Deal — all with strong Rowan County connections — were among the 29 inductees into the Hall of Fame Saturday evening.

Fisher has been in the hospital and could not attend. Accepting on his behalf was daughter Malinda Fisher Bollinger.

Hartman’s induction came posthumously — he died in 1999 — and his family, including daughter Dianne Hall, accepted for him.

About 500 people attended the ceremony at the Embassy Suites/Concord Convention Center.

While the Masters golf tournament is known for handing out green jackets to the winners, the N.C. Military Veterans Hall of Fame presents blue jackets to each inductee or his or her representative.

The inductees also received gold medals, plaques and U.S. flags that had flown over the State Capitol building in Raleigh. In going to the stage to be recognized, each veteran passed under swords forming an arch and held by members of the East Mecklenburg High Junior ROTC.

“I’ve been on Cloud Nine ever since they picked me,” said Deal, who is in his mid 90s.

Rowan County inductees are quick to let you to know they think all of North Carolina’s 736,000 veterans are deserving for Hall of Fame recognition. They just happened to have friends or loved ones who thought they should be nominated, they stressed.

“It’s fine,” Hoffner said, but I really feel like there’s a lot of other fellows more deserving than me, but it’s nice.”

This year’s class was the young Hall of Fame’s second. Last year’s inaugural class had 22 inductees.

Judy Crook, who heard about the Hall of Fame through her volunteer work at the Frontier Coffee Shop last year, knew she wanted to nominate her father, William Hill.

Hill’s reaction Saturday; “It’s nice. I appreciate her doing it.”

Darconte knows why he was accepted.

“I figure at my age they needed to throw an extra Marine in there,” he said with a chuckle.

Darconte enjoyed meeting several of the fellow inductees at the Friday reception, and noted that “everybody’s got a story” when you’re a military veteran.

Part of his is that after the infamous bombing of a Marines building in Beirut, it was Darconte’s job to fly in the helicopter with the wounded to the USS Iwo Jima.

N.C. veterans can be nominated to the Hall of Fame in three different categories: valor, achievement or service. Harrell noted that he and Luckey are “service” inductees for what they’ve done for veterans through the coffee shop.

“Thelma and I are both going in under that banner,” he said.

Harrell figures veterans met 262 times — with him and Thelma there, too — at Luckey’s restaurant before it recently moved to the K&W Cafeteria.

The late Sen. Sam Ervin Jr., who was awarded the Silver Star and Distinguished Service Cross in World War I, also was an inductee.

U.S. Army (Retired) Lt. Col. Richard D. Kingsberry, who serves as board chairman for the Hall of Fame said with so many veterans in the state, one might ask why is a hall necessary.

Kingsberry listed many of the basic freedoms Americans have.

“Do we enjoy these freedoms?” he asked, “Then I will tell you, this is necessary.’