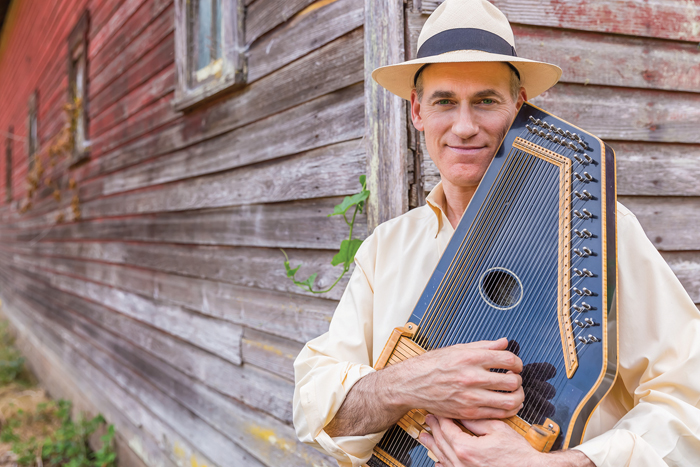 Submitted photo Adam Miller, folklorist, storyteller and master of the autoharp, will be at Rowan Public Library on Tuesday.

This program commemorates the sesquicentennial of the opening of the First American transcontinental railroad in 1869.

A reviewer in Melbourne Beach, Florida, said that Miller’s presentation is “even more accessible than most good folk music. His stories are not the boring ‘once-upon-a-time’ kind, but rather keep you in a constant state of suspense, and his gentle, building guitar chords heighten it. It’s all about how folk music lives on through oral tradition and has a kind of ‘betcha didn’t know you’ve done it too!’ kind of theme. It will charm even the most die-hard of iPod loving kids or reluctant significant-others.”

Miller is an old-school American troubadour and a natural-born storyteller (he received the 2019 Storytelling World Award). One of the premier autoharpists in the world, he is an accomplished folklorist, song-collector and raconteur who has amassed a repertoire of more than 5,000 songs. With his resonant baritone and easy audience rapport, Miller is an entertainer who never fails to get his audience singing along.

Skillfully interweaving folksongs and the stories behind them with the elegance of a documentary filmmaker, Miller is recognized as one of the great interpreters of American folksongs and as a storyteller par excellence. He is that rare performer who appeals to audiences of all ages.

Traveling 70,000 miles a year, Miller performs over 200 concerts annually in 48 states, from the Everglades to the Arctic Circle. More than 1.5 million students have attended his Singing Through History! assembly programs. He has performed live in over 2,000 American public libraries.

Miller began his lifelong pursuit of collecting old songs while still in grade school. Armed with an audio-graphic memory and a kaleidoscopic musical curiosity, his childhood ambition was to learn every song he heard.

Today, with a repertoire of thousands of tunes, his traditional folksongs and ballads are the songs of America’s heritage: a window into the soul of our nation in its youth. A performer who enlightens as well as entertains, he points out fascinating connections between events in history and the songs that survived them.

And like radio commentator Paul Harvey, Miller gives you “the rest of the story” — providing the often surprising provenance of seemingly simple folk songs.

Miller explains it this way, “Folksongs travel through History. History travels through Folksongs.”