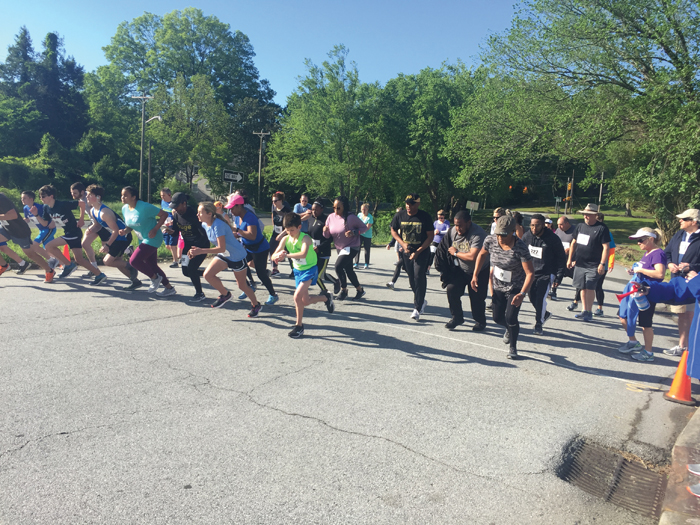 For NeeCee Chunn, Saturday’s “Stomp Out Sexual Assault” 5k and Fun Run was the perfect marriage of two of her passions.

She loves to run, she said, but greater still is her passion for the work done by the Family Crisis Council — work she’s assisted since her time on the council’s board and, now, as its sexual assault advocate.

Chunn, a retired police officer, said that Saturday’s event was more than just a fundraiser for the nonprofit: it was an opportunity to spread awareness about the council’s vital role in Rowan and the surrounding area. Through its team of community educators and advocates, the council provides support to victims of interpersonal violence, including domestic violence, sexual assault and human trafficking.

This support ranges from emergency shelter and hospital accompaniment to court advocacy.

But, said Chunn, community members need a greater awareness on more than just this wide array of support services.

“We just want to make everybody aware of the signs of abuse and trafficking,” she said. “People walk by this every day without even realizing, but they’re looking for outer scars. A lot of the people we serve, their scars are internal.”

In effort to fund this community education and the continued work of the council, Chunn organized the weekend 5k and half-mile Fun Run, held the last Saturday of Sexual Assault Awareness Month.

The Salisbury Rowan Runners provided timing for the event, as participants ran a course through the Salisbury Greenway. It began just behind Knox Middle and ended with a loop around the school’s track.

Guiding runners along the way or welcoming them across the finish line were Crisis Council staff and volunteers as well as partnering societies: members of the Rowan County Early College National Honors Society and the Beta Mu Lambda chapter of Alpha Phi Alpha.

Members of the latter were drawn through a connection to Chunn — her son, Theo, is a member.

“We came in in hopes to help those who go through domestic violence and abuse,” said Theo. “We want to offer our solidarity or support for the cause.”

Renee Bradshaw, executive director for the council, said she hoped to see the race grow in years to come, agreeing with Chunn’s desire to use the event as an opportunity for education.

“We want people to be aware of abuse, of what it is, of who to call when something happens,” she said. “We can and we do provide all services free of charge.”