Everly, the lionhearted: With her family’s help, a little girl refuses to give up 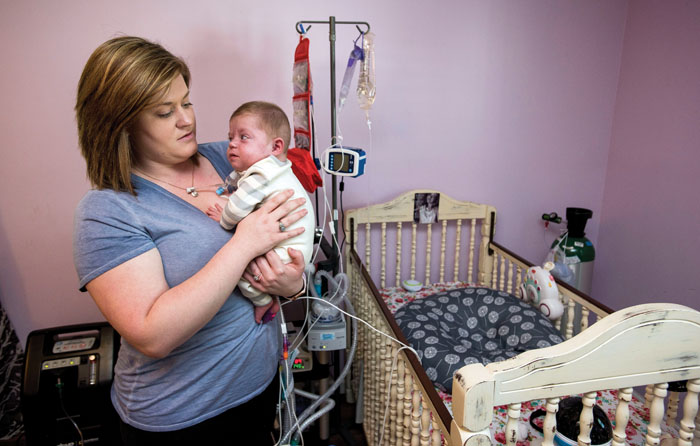 SALISBURY — Everly Allyson Crandall’s blue eyes draw you in, and her cheerfulness causes grown men to start babbling back at her like the baby she is.

But it’s Everly’s stubborn side that has served her best these first eight months.

The nurses in the neonatal intensive care unit at Charlotte’s Novant Health Presbyterian Medical Center — where she stayed 244 days before coming home earlier this month — called Everly “Miss Feisty,” and she was a star of sorts on the seventh floor.

It was out of respect.

Everly already has had 80 X-rays, 11 blood transfusions, 20 IVs and four PIC-lines, and her tiny heels have been pricked at least 400 times. On Dec. 6, she had four surgeries in one day — a tracheostomy, two hernia repairs and the placement of a gastronomy tube.

Of six doctors consulted, three recommended the surgeries, while three others voted against them, saying she would die during any one of the operations.

“Eventually, they all got on the same page,” says Lauryn Crandall, Everly’s mom.

Four or five times on Dec. 21 — the exact number is hazy now — Lauryn and Steven Crandall were asked to sign do-not-resuscitate documents as their little girl took a turn for the worse.

Doing so meant Everly would be taken off her ventilator and allowed to die. That night, Everly experienced episodes in which her breathing stopped completely.

All the alarms around her would sound, and she had to be brought back by heroic nurses bagging her and forcing air into her tiny lungs.

Everly’s grandmothers were called into her room to say their final goodbyes.

“It was a dramatic night,” Tammy Crandall says, “and we thought we would never see her again.”

But Lauryn, 26, and Steven, 25, refused to sign the DNR. They opted instead for the long-shot administration of a paralytic medicine, and somehow Everly confounded her doctors, fought back and survived.

Lauryn was clinging to life herself on Aug. 9, 2018, when Everly was born by emergency C-section. The baby weighed 1 pound, 6 ounces and was only 12.5 inches long.

“She was as big as Steven’s hand,” Lauryn says.

Because of her underdeveloped lungs, Everly has bronchopulmonary dysplasia, a chronic lung disease requiring her to be on a ventilator all the time.

In addition, Everly deals with an open flap in her heart — patent ductus arteriosus — that allows non-oxygenated blood into her body. She will have surgery to repair the hole in her heart in June.

Lauryn and Steven Crandall have never heard Everly cry — or make a sound, for that matter. At first she always had a tube down her throat that was connected to the ventilator. Now the trachea through which the ventilator is attached presses against her vocal cords.

But Everly finds ways to communicate. There’s that smile, of course, as she recognizes faces and voices.

“And she talks with her eyebrows a lot,” Lauryn says. “She’s a good baby. Her machines act up more than she does.”

You can’t tell Everly’s story without knowing about her late aunt, Allyson Shulenburger — a younger sister of Lauryn’s.

A picture of Allyson has been taped to Everly’s crib, just above where she sleeps.

Out of nowhere last spring, 20-year-old Allyson began having headaches until eventually they became so severe she went to a hospital emergency room. Doctors soon determined Allyson had suffered several mini-strokes.

On April 10, 2018, as she was having an MRI done, a more severe stroke damaged her brain stem, and Allyson went into a coma from which she never emerged.

In the almost three weeks leading to Allyson’s death, Lauryn stayed at Presbyterian in the neurological ICU by her sister’s side, not knowing she would be repeating the same kind of vigilance for a much longer period in the months ahead.

Lauryn was only 13 weeks pregnant when she took on the responsibilities for writing her sister’s obituary and handling many of the funeral arrangements for her distraught parents.

Only a year earlier, Chris Shulenburger, her father, had been diagnosed with liver cancer and required a liver transplant.

Lauryn is convinced that the lingering stress and processing of her sister’s unexpected death led to the life-threatening spike in her blood pressure last Aug. 9. It was so high that doctors ordered the C-section in hopes it would at least save Lauryn’s life.

Everly, who was given the middle name of Allyson after her late aunt, was delivered at just 24 weeks, when the survival rate is only 30%.

Lauryn had to stay hospitalized herself for two weeks. During that time, Everly’s skin was still so thin — sticky to the touch — that her parents were not allowed to hold her.

That day finally came Aug. 18, and it also began the months that Lauryn spent her days in the NICU with Everly and her nights with Steven in the Ronald McDonald House in Charlotte.

Every morning, Steven would drive back to Rowan County and go to work.

“I admire both of them so much,” grandmother Tammy Crandall says.

Lauryn was able to supply some breast milk for a time when Everly didn’t need much. But when Everly started going from 5 milliliters to 20 milliliters, Lauryn couldn’t produce enough milk because she hadn’t been pregnant long enough.

Everly had to be fed through a tube down her throat until the tracheostomy required the gastronomy tube into her stomach.

Everly also came close to death Oct. 10. She was struggling to keep her blood oxygen level in an 85% to 95% range, even while getting 100% oxygen. It dropped dangerously low.

“Doctors told us she was extremely critical and would not make it through the day,” Lauryn wrote on the Facebook page “Prayers for Everly,” which has more than 500 followers.

Everly beat the odds again. Still, in the weeks to come, she dealt with bouts of pneumonia and infections.

Out of eight months, from August to April, Lauryn made a trip back home to Rowan County only a handful of times.

While she was a fixture in the NICU at Presbyterian hospital, Lauryn learned to give Everly her medicines, set up the feeding tubes and keep track of all the machines attached to her.

“Everly wouldn’t be where she is without Lauryn,” Tammy Crandall says. “She was an advocate for her daughter.”

It became one of the hardest things for Lauryn to see other NICU babies — some even smaller than Everly had been at birth — go home while Everly stayed and became the oldest baby in the unit.

Lauryn built friendships with other parents and served as a mentor at times. She says she offered them this advice: “You can’t dwell on yesterday or worry about tomorrow … because every day is different.”

The day Everly finally came home — April 10 — was the same date a year earlier that Allyson had lapsed into a coma.

Believe it or not, Everly has just reached 12 pounds. These kinds of milestones are always celebrated — things such as weight gain, coming off certain medications and her delight with a watermelon ring pop at Easter.

Until Lauryn and Steven can remodel a nearby modular home, they are staying with Lauryn’s father in his doublewide across Cooper Road.

The couple and Everly live in a large bedroom filled with the machines that keep Everly alive. They include the ventilator, a monitor for her blood oxygen level and heart rate, a feeding pump and a suction machine that cleans mucus off her trachea.

Nearby in the room are all the to-go versions of these same machines in backpacks. To paraphrase a well-known television commercial, she can’t leave home without them.

Everly still has eight doctors who see her, depending on the week. When Steven and Lauryn have her appointments in Charlotte, just getting Everly and all the equipment that must go with her into the SUV takes a half hour.

It requires another 30 minutes to move from the car to the doctors’ offices once they arrive. It’s all repeated on the trip back home.

At home, Lauryn is the chief caregiver with pediatric nurses coming twice a week for eight hours.

In hearing Lauryn talk about her daily duties and describe all that Everly has gone through, you realize the young mother has absorbed the equivalent of a nurse’s degree in the past eight months.

“It’s only from being up there (at Presbyterian hospital) all day long,” Lauryn says. “I just made sure I knew as much as I could.”

Steven works for his family-owned landscaping service, Southern Images. Lauryn had to quit her job as a dispatcher with ABC Towing.

Lauryn makes sure Everly gets her medications in the morning and others in the middle of the day and at night. Her trachea has to be cleaned at least once a day.

The little girl eats every three hours through the tube in her belly. Lauryn makes a conscious effort during the day to move Everly often and give her whatever physical therapy she can.

The couple have 10 infant chairs offering different positions and three different sleeping pillows. As of now, Everly can’t sit up on her own.

Lauryn says it will be difficult for Everly to learn to crawl and walk as quickly as other children because she will learn she is tied to the ventilator — something that could be her constant companion for several more years.

“She’ll have to speak to us in sign language before she can talk,” Lauryn adds. “If she’s 5 (by the time she’s breathing on her own), by the time she’s 7 she should catch up with her voice.”

Lauryn and Steven Crandall have known each other since grade school and graduated together in 2011 from West Rowan High School.

Lauryn recognizes how much strain it put on their family for her to have disappeared essentially for the past nine months out of 12.

“Had he not known me so well,” Lauryn says of Steven, “it would have been much harder. A lot of it I couldn’t have gotten through without him.”

Each parent has a 6-year-old daughter from previous relationships. Ashton, Lauryn’s daughter, will be living with them once Steven and his dad remodel the house across the road.

They also have regular visitations from Steven’s daughter Mkenzi. Everly is Steven and Lauryn’s first child together.

The Crandalls had an opportunity to bring Everly home a month sooner, if required 24-hour nursing in the first week could have been arranged. But their remote country location and the scarcity of pediatric nurses for home visits made it difficult.

NICU nurses Christy Paschal and Kaitlyn Martin came to their rescue, and the Crandalls say they are forever indebted to them.

Because of Everly’s birthweight, state Medicaid will cover her major medical expenses until she’s 18, but the now one-income family faces paying for things such as extra syringes and rolls of tape, not to mention items any infant needs.

The couple set up a GoFundMe page, and friends are planning to stage a bowl-a-thon in Greensboro this summer to raise money.

The Legendairy milk company heard of Everly and made her its “Legendary Little” for April. The company will donate a portion of its profits this month toward Everly’s medical needs.

One of the biggest needs now, Lauryn says, is for people who might be able to help Steven and his father remodel their house on weekends.

“There is so much to this story — courage hope, prayers and love,” Tammy Crandall says. “This little family has been through so much in the past year.”