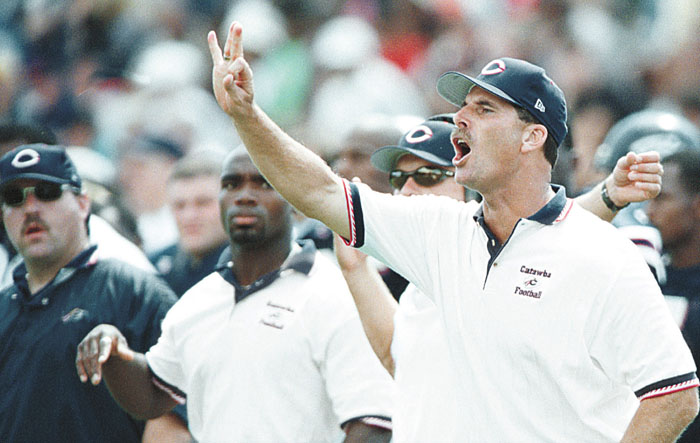 Wayne Hinshaw/Salisbury Post file photo ... Former Catawba College football coach David Bennett, shown during a game in 1999. began a golf tournament in 1995 to raise funds for the football program. The event celebrates its 25th anniversary on May 10 at Warrior Golf Club and Bennett will serve as a co-captain,

SALISBURY — Catawba College’s annual golf tournament, a fund-raiser for the football program, will be held on Friday, May 10, at Warrior Golf Club in China Grove.

The event, now in its 25th year, has grown to the point where there will be a morning session (8:30) and an afternoon session (1:30). Catawba expects 50 four-man teams to participate, 25 in each session. Lunch will be provided at 11:30 a.m. for both groups.

Former Catawba football coach David Bennett began the golf tournament in 1995 as the Indian Invitational, held at McCanless Golf Club, in an effort to support the football team’s budget.

When Warrior opened in 1999, Bennett moved the event there and for a few years, called it the Celebrity Classic, featuring former NFL stars like Billy Ray Barnes and Roman Gabriel, as well as personalities from the media and entertainment fields.

Catawba eventually moved away from the celebrity aspect, but the event continues to flourish.

Bennett returns as one of the co-captains for this year’s event, and one of his former players, Nick Means, is the other co-captain.

Bennett enjoyed a very successful career (63-17) at Catawba in 1995-2001, before leaving to start a new program at Coastal Carolina University. Means was an outstanding wide receiver for the Indians in 1999-2002. Both Bennett and Means are now in the Catawba Sports Hall of Fame.

Bennett is now the athletic director for Lexington (S.C.) School District 1. Means resides in Salisbury and is a training and development officer at F&M Bank.

After Bennett left in late 2001, Chip Hester became head coach and kept the golf tournament going each May.

In the last few years, Hall and Setzer have taken the tournament to another level, according to Walker and Jeff Childress, the college’s associate athletic director for athletic development.

“It’s great to have the support from throughout the community for our golf tournament,” said Walker, an assistant on Bennett’s staffs at Catawba and Coastal Carolina, who begins his seventh season in Salisbury this fall. “We’ve been able to do many things with our program because of the generous response from people coming out and enjoy a day of golf with us. It tells us that people are excited about our football program and that means the world to me and our players. The tournament definitely makes us able to do some things that we could not have done — recruiting travel and new equipment, just to name a few.

“Coach Bennett had a vision when he started this event years ago and, of course, it’s grown so much since then,” continued Walker. “But again, I think it was put in place back then for the same reasons and goals that we have now. This year, the event will help us with away uniforms and travel suits for our team and it’s so helpful when you don’t have to use your operating budget for things like that.”

It promises to be a great day of fun and food for all fans and golfers. Prizes will be awarded for the longest drive, closest to the pin, and for the tournament-wide putting contest.

“I don’t think it would be the tournament that it is now, financially, without the help of those guys,” added Walker. “Bill and Bob have done an outstanding job of making ties within our community and keeping people engaged with our football program. Without their support and connections within our community, the event would not be as successful. I appreciate Bill and Bob and others in their group for what they’ve done to help Catawba football.”

“At the end of the day, you have to give a lot of the credit to Bill Hall and Bob Setzer, because they took the bull by the horns, along with Coach Hester, after we left,” said Bennett. “They’ve turned it into a really great fund-raiser for the football team. I believe the funds they’re raising are at an all-time high.

“I kidded with Bob that if they want Nick and I to be co-captains, that must mean that Bill is the head coach and he is the coordinator,” continued Bennett. “But it’s been fun reaching out to people, asking them to help and support. We loved our time there and we’ll do anything to help Catawba College.”

If any of the golfers in the tournament make a hole-in-one on the par-3 No. 12, he or she will have their choice of a motorcycle from Tilley Harley-Davidson, or $25,000.

Childress added that there is still availability for “two or three” teams.

For more information, see www.gocatawbaindians.com or call the athletic department at 704-637-4474.