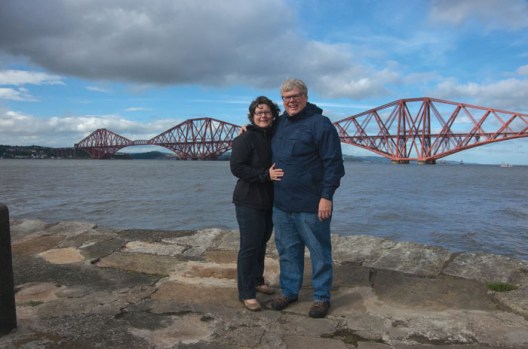 Kenneth and Kim plan to travel more together in the upcoming months. They are pictured here during a trip to Maine. Photo by Kim Lance. 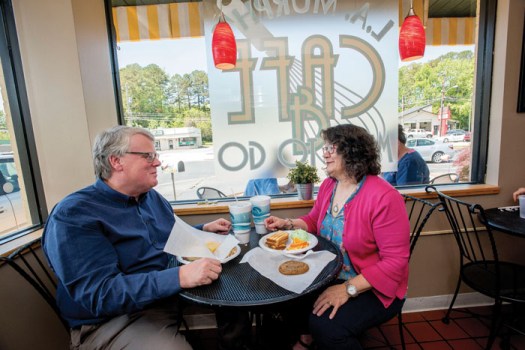 JON C. LAKEY/SALISBURY POST Ken and Kim Lance enjoy a lunch meal together at L A Murph's on West Innes Street in Salisbury. 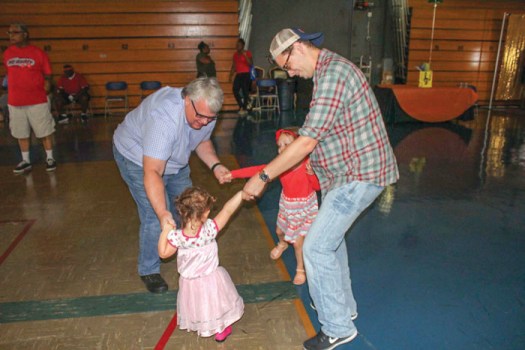 Over the years, Kenneth has connected with members young and old. Photo by Kim Lance. 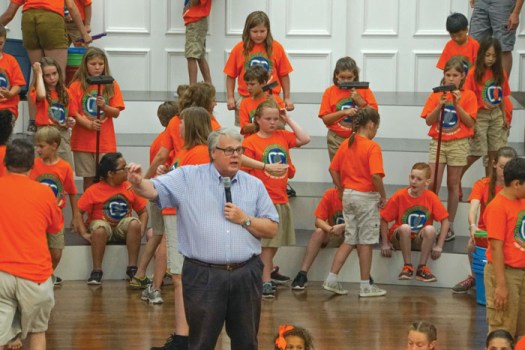 Kenneth was instrumental in bringing the Upward Basketball Ministry to First Baptist. Photo by Kim Lance.

For 17 years, Dr. Kenneth Lance has shepherded the congregation of First Baptist Church. Honestly, he says, the honeymoon never ended. But Kenneth, 57, is about to enter a new season of his life. He is retiring from the senior pastor role of parish ministry, his last day at First Baptist is May 1, and his last Sunday is this morning.

The congregation, understandably was taken aback by his retirement announcement on March 17. Folks wondered what had happened. Absolutely nothing, Kenneth says.

But he is ready to embrace some aspects of retirement, including traveling and spending more time with his family. He and his wife, Kim, have two adult sons, Zack, 29, who lives in Rowan County, and Ian, 27, who lives in Buncombe County. Kenneth is also relishing being able to spend time with his parents, Cecil Lance and Brenda Rayle, who both live in Hendersonville. It’s no secret that senior pastors’ families are accustomed to sacrificing time with them.

Beyond being willing to serve the church in a new capacity, after 35 years of full-time ministry, he doesn’t yet know what the future holds.
“This is a test of faith,” he notes. “I’m leaving something I know. There are lots of ways I can do ministry and serve that don’t carry the title of senior pastor.”

His congregation was shocked when they learned of his decision, he says. “They truly love us and we love them. We are in a good place and everybody is happy. Everyone has been gracious and affirming, but at the same time, very sad.”

He understands that serving at one congregation for 17 years is something of an anomaly. “When you have been there at a child’s birth and graduation, and when you’ve conducted funerals and have been with people at their most joyous and most vulnerable times, there is an intimacy and closeness that you share. Basically, you have full access to people’s lives, and it is a unique relationship. After a long period of time, those bonds become strong.”

David Whisenant agrees. He was on the pastor search committee which called Kenneth. The committee received hundreds of applications, he recalls, and they had to narrow them down.

David’s mother-in-law knew him, and mentioned he was a good guy.

“That’s how he came to our attention,” David notes.

The committee traveled to Greer, S.C., to hear Kenneth preach.

“After the service, the six of us looked at each other in disbelief,” David says. “He looks like a cream puff, but he preaches like a chili pepper.”

Kenneth and the Rev. Brian Farmer, associate pastor and minister to students, are the two staff members who have served together longest.

“It has been a truly wonderful and enriching experience,” Brian says. “The title of pastor fits him perfectly. He shepherds God’s flock, and that includes his colleagues. He works hard to build the true team mentality. He challenged and helped equip us to grow personally as well as in our ministries. He encouraged us to take risks and supported us when those risks didn’t always work out. He also was our greatest cheerleader when they did. He was especially helpful to me as a ‘specialist’ (his term) who usually works with a smaller percentage of the congregation to have continued ministry to and interaction with the total church body.”

He continues, “He lovingly walks with people through their darkest days and through life’s greatest celebrations.

“He is also not afraid to deal with unpleasant issues when they arise in order to keep from allowing them to become an even bigger problem. He accomplishes this with love and tactfulness without backing down from spiritual convictions. Kenneth — who by the way doesn’t like to be called Ken but is too gracious to correct people — isn’t concerned about getting personal glory.”

How does someone who cares for others care for himself?

“By practicing the spiritual disciplines of prayer and private worship,” he says, “and realizing the big picture of what’s going on in people’s lives. We are moving toward the kingdom. That’s an energy maker.”

He also practices self-care by working out at the Hurley Y, reading mystery novels and listening to bluegrass music.

And he has lunch with his wife every day.

“Kim and I are both in ministry positions,” he says of Kim, who will retain her marriage and family therapy practice here in Salisbury. “We have to take care of each other.”

“I’m excited,” Kim says of their new adventure. “We will miss everyone.”

Kim will continue her private practice here in Salisbury, A Safe Place Counseling. She offers marriage and family counseling, with an emphasis on children who have been through trauma.

When Kenneth approached her about retiring, she was open to it. “We both prayed about it, and felt it was what God was calling us to do.”

As a pastor, she says, “Ken is kind and empathetic. He knows how to handle people when they are hurting. He’s a sincere person. What you see is what you get, and he is a great husband. I look forward to our daily lunches. That has been an important part of our relationship. He’s just a good person.”

In his time at First Baptist, Kenneth says that’s he’s never gotten an anonymous letter, or been the subject of any negative campaign, as has been the case with his colleagues.

“I remember one meeting at which emotions ran higher than normal,” he says. “It’s just been a 17-year honeymoon. Our people have been tremendously gracious and kind.”

Kenneth has spent half his ministry here.

“I’ve been a pastor for 34 years,” he says, “but I really felt called to be a pastor when I was 16. At that point, everything in my life was geared around church and getting to where I wanted to be in the church. So for 43 years, that’s been the identity to which I aspired or was paid to do. So this particular season has been a lot longer than people realized.”

Looking back on his ministry at First Baptist, Kenneth is particularly proud of three accomplishments: hosting the Upward basketball program for many years, supporting the Access Ministry for special needs worshippers, and renovating the sanctuary to become more accommodating.

“Without Kenneth, there would not be Access,” says Mary Ann Cody, a founding member of the ministry. “Fewer than 10 percent of churches in North America have disability friendly churches. That intentional leadership for this ministry has come from the top down. Kenneth has given us his advice and guidance, he’s driven the bus, he’s been a roommate. He had no problems with getting messy. He has a heart for all people, and that takes intentionality. It doesn’t just happen.”

To allow for a new senior pastor to come in after such a long tenure, Kenneth and Kim are moving to Winston-Salem. Brian and the Rev. Rod Kerr will share preaching responsibilities this summer. This fall, the congregation will call an intentional interim pastor, then form a pastor search after a period of healing.

“It would be easier to stay,” Kenneth says, “but my work here in this part of the vineyard is done. I needed to disengage so that the congregation would have the best chance to love the new pastor the way they’ve loved me.”

During services this morning, the Access ministry choir is singing at Kenneth’s request.

The choir chose “Glorify Thy Name,” the perfect song for a pastor seeking to move toward the kingdom.