Panthers draft local QB Will Grier to back up Newton 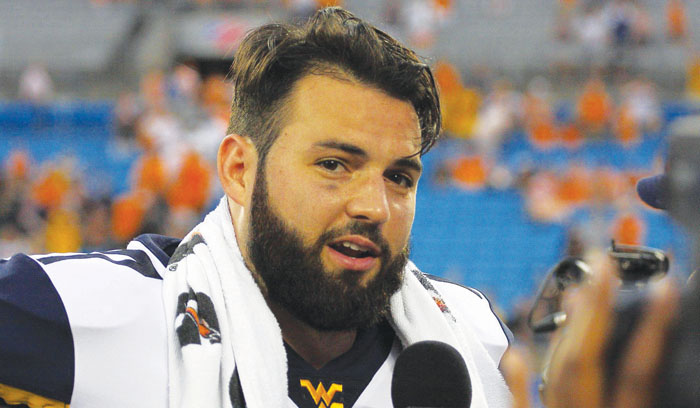 WVUsports.com photo ... West Virginia quarterback Will Grier was selected by the Carolina Panthers in the third round on Friday during the NFL draft in Nashville, Tenn. Grier is from Charlotte and play high school football at Davidson Day.

CHARLOTTE (AP) — The Carolina Panthers didn’t have to look far to find Cam Newton’s backup.
Turns out he was just down the street.
Carolina selected West Virginia quarterback Will Grier, who grew in the Charlotte area and cheered on the Panthers as a youngster, after he fell to the bottom of the third round. Panthers general manager Marty Hurney said the decision to draft Grier was not out of concern about Newton coming back from offseason shoulder surgery.
“This has nothing to do with Cam Newton,” Hurney said. “He is our franchise quarterback and our starting quarterback.”
But Hurney said it’s vital for the Panthers to develop young quarterbacks. The team hadn’t drafted a quarterback since taking Newton with the No. 1 overall pick in 2011.
“This is a position when you find a guy you like and have a chance to get him and it helps the depth at the most important position, you have to do it,” Hurney said.
Grier, whose favorite athlete is former Carolina wide receiver Steve Smith, said it is “surreal” that the Panthers selected him.
When the Panthers called to inform Grier they were taking him, he was literally within walking distance to the Panthers downtown stadium living in temporary housing until the draft.
“Unbelievable opportunity,” Grier said. “I couldn’t be more excited. I don’t even have to move. It’s what I always wanted to play for the Panthers.”
Coach Ron Rivera said the Panthers had decided more than a year ago it was time to begin developing a young quarterback as a backup and potential long-term replacement.
“Marty talked about finding that next guy,” Rivera said. “We have to develop the next guy.”
Grier, who is married and has a young daughter, was a finalist for the Maxwell Award and the Manning Award and finished fourth in the Heisman Trophy voting after throwing for 3,864 yards and 37 touchdowns last season for the Mountaineers.
But he started getting antsy as he began to fall in draft.
He and has father, Chad, who used to watch the Big Bang Theory together, decided to switch seats just moments before he received a call from the Panthers to provide a change of luck.
“We both have some Sheldon tendencies,” joked Chad Grier of the main character in the TV show. “I think it worked. His agent said we should have done it hours ago, though.”
Hurney said Grier is already a mature quarteback and has the “it factor.”
The GM downplayed concerns about Grier’s lack of arm strength, saying he can make all of the throws needed to succeed in the NFL.
“It’s not a question for us,” Hurney said.
The move gives the Panthers some insurance in case Newton struggles to come back from his shoulder surgery.
Earlier, the Panthers traded up 10 spots to No. 37 in the second round to get Mississippi left tackle Greg Little, a 6-foot-6, 325-pound left tackle who was a first-team All-Southeastern Conference selection last season to protect Newton’s blind side.
“I take pride in keeping people safe,” Little said of protecting Newton. “And I’m going to keep him safe.”
Panthers general manager Marty Hurney said he felt the need to trade up to get a left tackle because they were “flying off the draft board” and Carolina needed to fill that spot before they were all gone. Hurney believes Little has a good chance to come in and compete to be the opening day starter at left tackle.
The move was costly for the Panthers, who gave up their own second round pick (No. 47) and an early third round pick (No. 77) to Seattle to move to get Little.
But Hurney said the team couldn’t wait any longer.
“We really liked Greg and we had really good grades on him,” Hurney said. “There was a run on tackles and we didn’t think he had any chance to get to us (at No. 47).”
In the last 960 snaps the last two seasons, Little has only allowed 26 quarterback pressures.
“He’s big, he’s athletic and he has long arms,” Hurney said.
Little fills a big need for the Panthers following a disappointing 7-9 season.
Carolina cut left tackle Matt Kalil with three years left on a $55 million contract after he missed all of last season with a knee injury. The team had to sign free agent Chris Clark early in the season to come in and play left tackle in 2018. He eventually lost the starting job to Marshall Newhouse.
___
More AP NFL: https://apnews.com/tag/NFL and https://twitter.com/AP_NFL