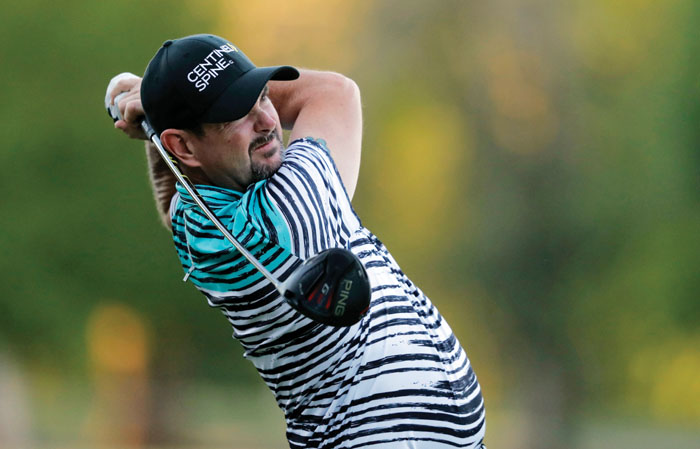 Rory Sabbatini hits off the 12th tee during the second round of the PGA Zurich Classic golf tournament at TPC Louisiana in Avondale, La., Friday, April 26, 2019. (AP Photo/Gerald Herbert)

AVONDALE, La. (AP) — Peter Malnati and Billy Hurley III topped the Zurich Classic leaderboard at 14-under 130 on Friday when darkness suspended second-round play in the team event at TPC Louisiana.
Malnati and Hurley played 36 holes Friday, shooting a best-ball 9-under 63 in the morning in the rain-delayed first round and a 67 in alternate-shot play in the afternoon in the second round. Play was delayed for more than seven hours Thursday, with only half of the 80 two-man teams teeing off.
“You play well in a day that doesn’t feel as long,” Malnati said. “But I’ll tell you what, I’m going to call it maybe our 28th or 29th hole, as we were making the turn, my legs were tired. I know Billy and I both, most of the guys out here, are into our conditioning and it’s important, but you’re not prepared to be on your feet walking for what we were today, 10 hours or more, with warmup more than that. It’s a long day.”
They played bogey-free in alternate shot, also the final-round format after the best-ball third round. Because of the wet conditions, players were allowed to lift, clean and place their golf balls in the fairways.
“We’d love to have a couple of putts back late on our second nine today,” Hurley said. “But playing 36 holes and stuff, the greens definitely got kind of scruffy a little bit and harder to make putts, so we’re super thrilled with pretty much every shot I think we hit today.”
First-round leaders Brian Gay and Rory Sabbatini were a stroke back with Russell Knox-Brian Stuard, Scott Stallings-Trey Mullinax and Kevin Kisner-Scott Brown, with only Knox and Stuard finishing two rounds. Gay-Sabbatini and Kisner-Brown had 14 holes left in the second round, and Stallings-Mullinax had nine to go.
Knox and Stuard shot 62-69 in their 36-hole day.
“I think we kind of got a bit of a break not having to come out yesterday and then getting it all in today,” Stuard said. “It’ll be nice to relax for a little bit.”
Gay and Sabbatini opened with a 60.
Major champions Henrik Stenson Stenson topped the group at 12 under after rounds of 65 and 67.
“We had a long day today. We have a bit of a lay-in tomorrow,” Stenson said. “It’s been a disrupted week for everyone one way or the other, and possibly the conditions for the guys who played yesterday and finished up this morning were a little easier. But we didn’t have to sit in the clubhouse all day yesterday. So there’s been pluses and minuses for everyone.”
___
More AP golf: https://apnews.com/apf-Golf and https://twitter.com/AP_Sports