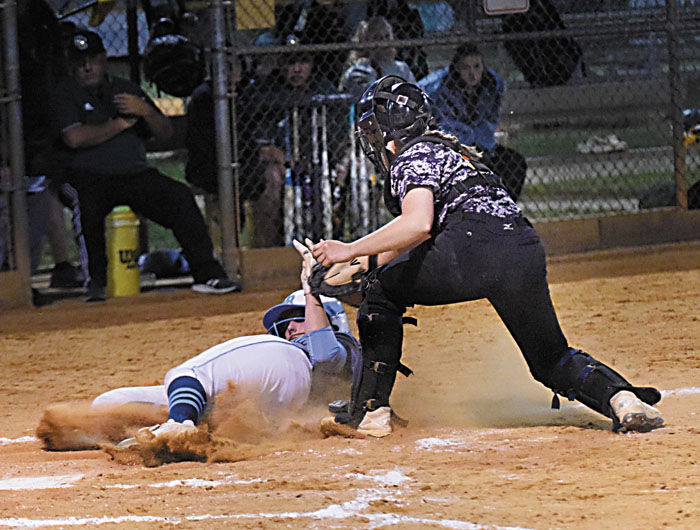 Wayne Hinshaw, for the Salisbury Post ... Despite being out at the plate in this photo, West Rowan's KK Dowling had three hits as the Falcons defeated Central Cabarrus, 9-5, in the Salisbury Civitan High School Softball Classic, Friday night at Hurley Community Park. The Vikings' catcher is Christina Brendle.

SALISBURY — Exhausted, her back hurting, a finger blistering and a toe throbbing, West Rowan’s Whitley Arnott fired her 330th pitch of the two-day Civitan Softball Tournament at Salisbury Community Park.

The result of that pitch was a well-hit ball to center field by Central Cabarrus’ Lacie Coubal, but any balls hit to center that don’t leave the park against West Rowan are outs. Gold Glover Hannah Pratt plays out there, and as soon as that ball went skyward, a weary Arnott sighed and started trudging toward a celebrating dugout.

“I was tired and I really wasn’t at my best today,”  said Arnott, who managed a small smile. “But there was some great defense behind me. Hannah Pratt was amazing. Kenadi Sproul made some great plays at second base.”

Arnott was named tournament MVP. In three starts, she struck out 26 batters, while walking only four. She pitched two shutouts, She also drove in seven runs as a hitter.

West beat Central 9-5 in Friday’s tournament championship matchup of 3A heavyweights. West (18-3) was ranked ninth going in, while Central’s Vikings (18-3) were ranked 10th. The top five in Central’s lineup had a lot of solid swings against Arnott, who is very tall, very strong and usually very intimidating.

“Central has some great bats,” Arnott said. “Those first five in the lineup, especially. You can’t get into a count where you have to give them a perfect pitch. It was really important to throw a first-pitch strike to the girls at the bottom of their lineup and then get them to swing at pitches off the plate. You need to get them out every time if you’re going to beat Central.”

Central’s bottom four were 0-for-10 with one walk and one HBP. Arnott enjoyed a 1-2-3 fourth and a 1-2-3 sixth against Central’s 6-7-8 hitters. Those innings provided a welcome break before she had to face the mashers again.

West catcher Megyn Spicer, tiny next to the 6-foot Arnott, did a marvelous job behind the plate, especially in the early innings when Arnott was struggling to find a rhythm.

“She was fighting to find her release point,” West coach Jimmy Greene said. “She was high a lot early, and good hitters knocked a couple of those high pitches out of the park.”

West never trailed in a tense game. Every time Central got even or got close, the Falcons responded with more pesky offense.

KK Dowling went 3-for-3 for West. Arnott, Pratt and Reagan Haggas had two hits each.

Mary Sobataka’s walk, Haggas’ bullet-single and Pratt’s bunt single loaded the bases for West in the bottom of the first. Infield hits by Dowling and Arnott plated runs. Spicer’s solid single made it 3-0. It was almost 4-0 on Spicer’s hit, but Dowling was called out at the plate on a close play when she tried to score from second base.

“Most of those balls weren’t hit hard, but if you make contact and put it on the ground, you’ve always got a chance to make something happen,” Greene said.

Three runs is usually more than enough for Arnott, but Christina Brendle’s solo homer in the second made it 3-1. Losing pitcher Brantleigh Parrott’s leadoff double in the third triggered a two-run rally that tied the game at 3-all.

West answered in its half of the third with its second three-run inning. Pratt’s bloop hit with one out got things started. After Hannah Roberts walked, Dowling singled in a run. Arnott’s groundout plated the run that made it 5-3. The Falcons made it 6-3 when Spicer’s hard bouncer was booted.

In the fifth, Central’s scariest hitter, Catawba signee Riley Tucker, drove one deep to right. West’s Caylie Keller almost made a fine catch at the fence, but the ball bounced off her glove for a two-run homer that cut West’s lead to 6-5.

“The biggest thing for our young girls is just to relax, to have fun and play the game,” Greene said. “Kenadi Sproul had a couple of errors early on tough plays, but then she settled down and made fantastic plays. The same thing with Keller. She was upset for a while about that ball that went off her glove, but then she moved on. She came in and got a hit.”

With the Falcons clinging to a 6-5 lead in the bottom of the fifth, Arnott collected her third RBI, driving in Dowling.

“KK was at second base, and we really needed that run,” Arnott said. “My strong field as a hitter is right field, and that’s what I was thinking. I wanted to hit the ball hard and low to right, and that’s what happened.”

It was still 7-5 when Sobataka hammered a two-run shot deep into the trees behind the fence in right-center in the sixth.  Sobataka had won the Home Run Derby earlier in the day, but she still had one long ball left in her. That made it 9-5 and everyone in and around West’s dugout breathed a sigh of relief. The Falcons knew they were going to be winners.

“We needed some insurance,” Sobataka said. “That homer kind of sealed the deal.”

With a lot of help from Sproul, Arnott had a 1-2-3 seventh, and her work day was finally done — appropriately enough with a 9-to-5 final score.

“This was a pretty huge win for us,” Sobataka said. “We beat a team that we believe is one of the best in 3A, a team we could see again. This means a lot of momentum for us going into the conference tournament and the state playoffs.”

Greene was elated as well.

“Our girls did a great job to beat an incredible team that is  incredibly well-coached and we were able to do it with one of our best players (Taylor Walton) out of the lineup,” Greene said. “Winning this tournament means a lot to me and my family. Frank Goodnight (a Civitan who worked the first day of last year’s tournament and passed away that night) was a lifetime friend of my father’s.”

NOTES: The championship game had been scheduled for 7 p.m., but it didn’t start until after 8 p.m. A lightning delay early in the day threw the schedule off track. … In addition to Arnott, West’s Sobataka, Roberts, Pratt and Haggis made all-tournament. Central Cabarrus’ Parrott, Coubal, Tucker and Destiny Thornton made all-tournament, along with Carson’s Kary Hales and Liza Simmerson, Cox Mill’s Kayla Smith and East Rowan’s Mackenzie Sprinkle. … Salisbury’s team received the Frank Goodnight Sportsmanship Award … West got a scare when Sproul stayed down for a while on a steal attempt. The catcher’s throw hit her helmet and the ball ricocheted and struck her on the mouth. She was bleeding in two places, but she wasn’t out of the game long. … The injury bug has hit West hard, with two starters (Walton and Allison Ennis sidelined).  Walton has a rib injury and has some medical tests upcoming. … West is the host team for the upcoming North Piedmont Conference Tournament.

Tiger Woods decides not to enter Wells Fargo in…