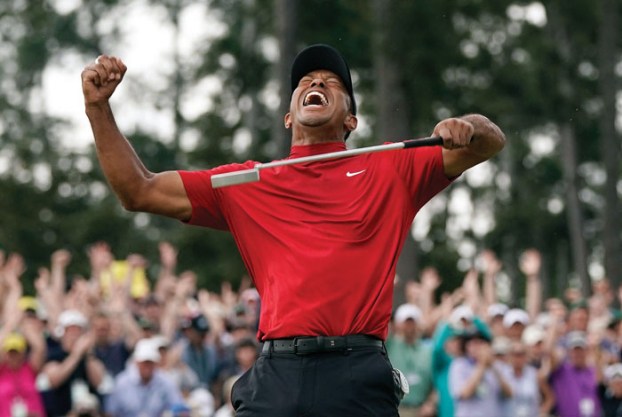 Tiger Woods decides not to enter Wells Fargo in Charlotte

By DOUG FERGUSON AP Golf Writer
Masters champion Tiger Woods is not ready to get back to work.
Woods did not enter the Wells Fargo Championship next week at Quail Hollow, meaning he likely will go an entire month without playing until the PGA Championship at Bethpage Black on May 16-19.
“He’s not ready to go next week,” said Mark Steinberg, his agent at Excel Sports Management. “The Masters took a lot out of him. He’s not hurt, but he is being smart.”
This would be only the third time in his career that Woods did not play between majors. He went nine weeks between the Masters and U.S. Open in 2006 when his father died, and eight weeks between the Masters and U.S. Open in 2008 when his left leg was badly injured.
He went a month between the U.S. Open and British Open in 2013.
Woods won the Masters to end 11 years without winning a major, one of his proudest feats considering he had overcome four back surgeries and at times wondered if his career might be over.
In an interview Thursday with GOLFTV, Woods said he hasn’t started preparing for his next event and that his fifth green jacket — his 15th major and 81st career PGA Tour victory — had not sunk in.
“I haven’t started doing anything,” he said. “I’ve just been laying there. And every now and again, I’ll look over there on the couch and there’s the jacket. Yeah, I did pull it off.”
The only other tournament before the PGA Championship — which moved to May this year for the first time since 1949 — is the AT&amp;T Byron Nelson, which is held on links-styled Trinity Forest in Dallas.
The PGA Championship is the only major in which Woods competed the week prior, but that was when it was in August and he played either the Buick Open at Warwick Hills or the Bridgestone Invitational at Firestone, both tree-lined courses.
Players had until 5 p.m. Friday to commit to Wells Fargo if they were not at this week’s PGA Tour event in New Orleans.
Woods won at Quail Hollow in 2007, though his results have been mixed since then. It is the only PGA Tour event where he has missed the 36-hole cut twice, in 2010 and in 2012. He returned last year and tied for 55th, 14 shots out of the lead.
“He’s not going to tee to not compete to win,” Steinberg said. “He’s not ready mentally or physically, but the physical side is not that he’s hurt.”
Woods said in the GOLFTV interview that he has started thinking about the PGA Championship — he won the 2002 U.S. Open at Bethpage Black — but that he has not started devoting hours to working on his game.
“I’m doing all the visual stuff,” Woods said. “But I haven’t put in the physical work yet. But it’s probably coming this weekend.”
The Wells Fargo Championship field includes defending champion Jason Day, Rory McIlroy, Phil Mickelson, Rickie Fowler and Justin Thomas, who won the 2017 PGA Championship at Quail Hollow.

By David Shaw sports@salisburypost.com SALISBURY — The only problem Jack Fisher and the Salisbury baseball team had Thursday night was... read more