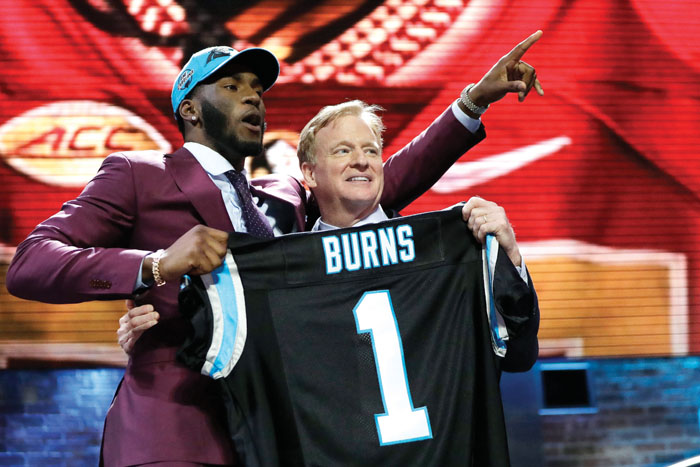 By STEVE REED AP Sports Writer
CHARLOTTE (AP) — When he was 8 years old, Brian Burns celebrated when his older brother Stanley McGlover was drafted by the Carolina Panthers in the seventh round.
Thirteen years later, McGlover returned the favor when the Panthers selected Burns, a defensive end from Florida State, with the 16th overall pick in the NFL draft.
“Pretty cool, right?” Burns said Thursday night.
Burns said McGlover could barely breathe when the announcement was made, joking that “he’s probably more excited than me. He’s going through it right now. He loves it.”
The Panthers drafted Burns to bolster a pass rush that finished 27th in the league in sacks last season. They hope he can become a long-term replacement for likely future Hall of Famer Julius Peppers, whom Burns met as a young boy when he attended a Panthers game to watch his brother play.
Burns said it’s crazy to think he’s now viewed as Peppers’ replacement in Carolina.
“I am glad to fill those shoes,” Burns said.
The Panthers knew they needed to upgrade at defensive end after losing Charles Johnson and Peppers — the franchise’s top two pass rushers ever — to retirement the last two offseasons.
Burns said he had a hunch the Panthers would draft him after Peppers announced his retirement in February.
“As soon as he retired I put it together and was like, man, this is going to be crazy if they take me,” Burns said.
The first thing that stood out to Panthers coach Ron Rivera when he watched Burns on tape is how quickly he gets off the line of scrimmage.
In Rivera’s eyes, he does that faster than everyone else in the draft.
Rivera compared him to current Panthers defensive Mario Addison, another speed rusher who has 39 ½ sacks over the past three seasons for Carolina.
“He’s very similar (to Addison) as he has that elite get off and those long arms,” Rivera said. “He will be a great complement to the group of guys we have in that defensive line room.”
Added general manager Marty Hurney: “The combination of his speed, his change of direction and his ability to stop on a dime and redirect. And then his length. He uses his (arm) length to set the edge on the run.”
Burns planned to celebrate by attending a midnight screening of the movie “Avengers: Endgame.”
But he’s eager to get to work as soon as possible.
“I’m hungry for knowledge and I want to learn,” Burns said. “I want to be coached.”
Rivera wouldn’t say if he expects Burns to start right away, instead saying he expects he will fit into the rotation.
The 6-foot-5, 249-pound Burns had 15 1/2 tackles for loss and 10 sacks to go along with 52 tackles last season as an every down player. Burns also broke up three passes and forced three fumbles and earned first team All-Atlantic Coast Conference honors.
He burst on the scene in 2017 when he had two sacks and 4 ½ tackles against Clemson. He finished with career with 124 tackles and 24 sacks for the Seminoles.
Burns was the fifth defensive end taken in the first 16 picks of the draft.
Rivera said if there is one thing Burns needs to learn its defeating the blocker at the point of attack before trying to find the ball.
“Focus in on the guy who is attacking you, finish him off and then go make the play,” Rivera said. “He wants to get to the ball so quickly.”
The Panthers are looking to rebound from a disappointing season in which they lost seven of their last eight games to fall out of playoff contention and finish 7-9.
Carolina has three picks on Friday night — one in the second round (No. 47 overall) and two in the third (No. 77 and No. 100). Among their most pressing needs is to find an offensive tackle.
___
More AP NFL: https://apnews.com/tag/NFL and https://twitter.com/AP_NFL