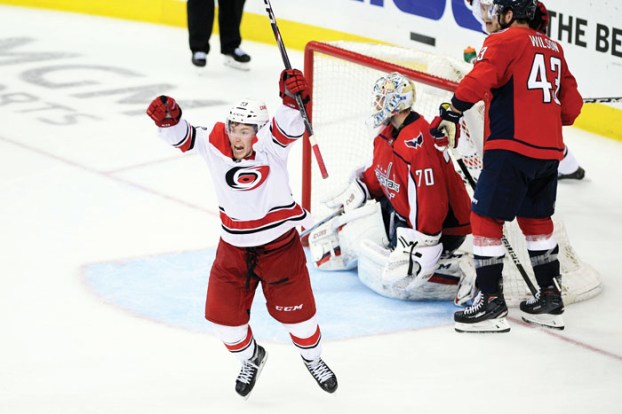 Barry Trotz knows better than most the razor-thin difference between agony and jubilation.

A year ago, his Washington Capitals were down 2-0 in their first-round series against Columbus and tied late in the third period of Game 3 when Blue Jackets winger Artemi Panarin’s shot clanked off the post.

Had it gone in, the Blue Jackets might have gone on for a sweep. Instead, the Capitals won in double overtime and went on to capture the Stanley Cup.

So when Trotz in this year’s first round sees the major penalty that cost Vegas Game 7 against San Jose or the mistake that helped Carolina eliminate his old team in D.C., the New York Islanders coach figures, well, that’s playoff hockey .

“It’s like coming around a corner and there’s a semi right there and you’re going to get hit or you just get out of the way in time,” Trotz said Thursday. “Nothing has really surprised me, but everything’s surprised me.”

Surprise, surprise, all four division champions lost in the first round for the first time in major four North American pro sports history. The teams that played in last year’s Cup Final are out and Tampa Bay, the team that finished 21 points ahead of the rest of the NHL, got swept.

It has been an astonishing April just a quarter of the way on the journey to hockey’s holy grail with the Boston Bruins, Blue Jackets, Hurricanes, Islanders, San Jose Sharks, Colorado Avalanche, St. Louis Blues and Dallas Stars left standing.

“It’d be like two NFL conference championships games with only wild-card teams or the NCAA Final Four with a 9, an 11, a 12 and a 14 seed,” University of Guelph sports business scholar Norm O’Reilly said. “If you’ve had guessed this group of teams, you could’ve won a lot of money. It’d be like winning the lottery.”

Someone who made a $10 parlay wager on all eight of these teams advancing would have cashed out with $11,000, according to pre-playoff odds by BetOnline.

Few could’ve predicted Presidents’ Trophy-winning Tampa Bay getting swept by Columbus, 2016 and 2017 champion Pittsburgh getting swept by the Islanders and Western Conference top seed Calgary going out in five to Colorado.

Former coach and executive Pierre McGuire said it has been fascinating to watch the upsets. But it’s not just luck.

He pointed to adjustments made by Columbus’ John Tortorella, Carolina’s Rod Brind’Amour and others that contributed to some unlikely outcomes.

Because there’s so much parity in the league today thanks to the salary cap, strong drafts and even expansion to Vegas, the margins are slimmer than ever.

“The first round was great, but it was a tactical first round with guys recognizing little trends in the games and little trends with the opposition that really helped them win,” said McGuire, an NBC Sports analyst. “If you’re going to win, if everybody’s equal, something has to be a tipping point. In a lot of these series, the tipping point has been marginal or really subtle adjustments that have made a huge difference.”

Toronto’s Nazem Kadri getting suspended the rest of the first round for a cross-check to the head of Boston’s Jake DeBrusk was a tipping point in the Maple Leafs’ seven-game loss. So was a broken collarbone to Washington’s T.J. Oshie and the now-infamous major penalty called against Vegas’ Cody Eakin that prompted an apology by the NHL.

The NHL moves on without the star power of Stamkos, Kucherov, Gaudreau, Crosby, Evgeni Malkin, Alex Ovechkin and Auston Matthews and more.

On the flip side, it’s a chance to shine a light on Avalanche forward Nathan MacKinnon, Blue Jackets defenseman Seth Jones and others.

“What can be really neat is the emerging of a new team or a new story, a new champion, which could be really good for the league and good for a market,” O’Reilly said.  “If an emerging team comes through and wins their first Stanley Cup, that’s a real home run from a marketing perspective for that market, for that city. There’s a significant silver lining on the cloud of the upsets from a marketing perspective.”

Only 24 players left in the playoffs have won the Stanley Cup and the championship seems truly up for grabs.

“It’s just one of those years where every team is so good, so deep,” Sharks defenseman Brenden Dillon said. “For every team that’s still in it, all eight teams, it’s open.”