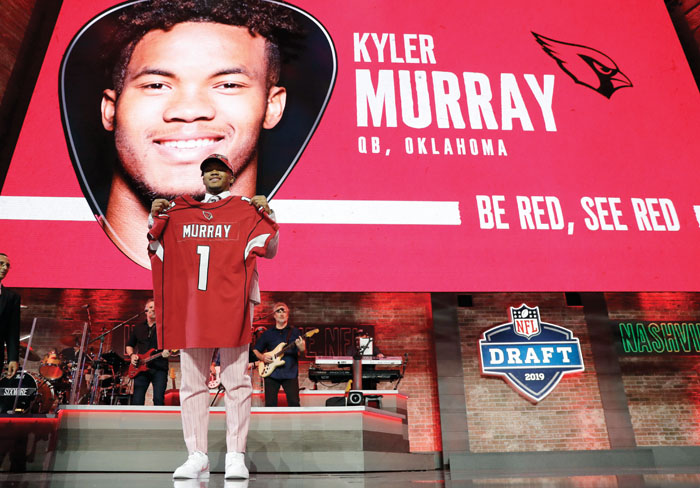 Oklahoma quarterback Kyler Murray shows off his new jersey after the Arizona Cardinals selected Murray in the first round at the NFL football draft, Thursday, April 25, 2019, in Nashville, Tenn. (AP Photo/Mark Humphrey)

TEMPE, Ariz. (AP) — The Arizona Cardinals ended months of speculation by taking Heisman Trophy winner Kyler Murray with the No. 1 overall pick of the NFL draft.

Now they have to decide what to do with Josh Rosen.

The Cardinals moved up five spots to take Rosen with the 10th overall pick of the 2018 draft and made it two straight first-round quarterback picks with their selection of Murray on Thursday night.

“I’m blessed to be here,” Murray told the NFL Network in Nashville. “I’m ready to go. No matter what the situation is, I’m a winner. I’m ready to go.”

Rosen had an up-and-down rookie season after being drafted out of UCLA, throwing for 2,278 yards and 11 touchdowns with 14 interceptions.

The hiring of former Texas Tech coach Kliff Kingsbury during the offseason changed the dynamic in Arizona.

The 39-year-old coach has brought his pass-first offense to the desert and Murray seems to be the perfect fit to run it. Kingsbury even recruited Murray to Texas A&amp;M when he was the offensive coordinator there in 2012.

Though small for a quarterback at 5-foot-10, Murray is strong-armed and shifty. He threw for 4,361 yards and 42 touchdowns with 11 interceptions at Oklahoma last season, and added 1,001 yards and 12 more touchdowns on the ground.

A backup to Baker Mayfield in 2017, he followed in the footsteps of his former teammate by winning the Heisman Trophy and being taken with the No. 1 overall pick a year later. Mayfield, now with the Cleveland Browns, quickly congratulated his successor in Norman.

“I feel we can be very dangerous,” Murray said. “He’s one of the best in the world at calling plays. I can’t wait to get up there with him. It’s been a long time coming and I hope he feels the same.”

The Cardinals had been on the clock for three months, yet have seemed to have a hard time deciding what to do with the fourth No. 1 overall pick in franchise history.

Murray’s decision to play football instead of baseball added a layer of intrigue, even with Rosen on the roster.

Arizona’s brass said it was still undecided days before the draft, leaving fans and media wondering if they would take Murray, pick a defensive player or trade down and get more value.

It ended up being Murray, giving the Cardinals two top-10 quarterbacks — and some decisions to make.

Carolina selected the Florida State standout with the 16th pick in Thursday’s night draft to bolster a pass rush that finished 27th in the league in sacks last season. The Panthers hope he is a long-term replacement for likely future Hall of Famer Julius Peppers.

He burst on the scene in 2017 when he had two sacks and 4 ½ tackles against Clemson. He finished with career with 124 tackles and 24 sacks for the Seminoles.

Burns was the fifth defensive end taken in the first 16 picks of the draft.

Carolina needed a defensive end after struggling to apply pressure the quarterback last season, although offensive tackle was also an option.

Peppers’ retirement earlier this offseason only added to the need for a pass rusher. Carolina signed free agent edge rusher Bruce Irvin this offseason but he’s viewed as a stopgap.

The Panthers are looking to rebound from a disappointing season in which they lost seven of their last eight games to fall out of playoff contention and finish 7-9.

EAGAN, Minn. (AP) — The Minnesota Vikings selected North Carolina State center Garrett Bradbury with the 18th overall pick in the NFL draft on Thursday night, using their first-rounder on an offensive lineman for the first time in seven years.

With the front five again their position of greatest need , the Vikings could hardly have had the board fall to them any better. Alabama tackle Jonah Williams, who could wind up as a guard in the NFL, was the first blocker off the board at No. 11 to Cincinnati. Boston College guard Chris Lindstrom went to Atlanta at No. 14.

Then the Vikings had their pick of the rest, with Florida tackle Jawaan Taylor, Oklahoma tackle Cody Ford and Washington State tackle Andre Dillard all available.

With the 6-foot-3, 306-pound Bradbury, the Vikings got a mobile anchor and a natural fit with the zone-blocking scheme they’ll be favoring to try to generate more of a running game and keep the pressure off quarterback Kirk Cousins. Pat Elflein, who has been the starting center since being Minnesota’s third-round draft pick in 2017, becomes a strong candidate to move to guard, his primary college position.

The Vikings did not go with another cornerback. General manager Rick Spielman even joked this week at his pre-draft news conference that his wife told him not to come home if the Vikings were to use that precious first-rounder on another player at the head coach’s favorite position, where Mike Zimmer has helped develop several draft picks into standouts over the last five seasons.

Last year, the Vikings passed on a deep class of interior offensive linemen to take cornerback Mike Hughes out of Central Florida with the 30th overall pick. Hughes showed plenty of promise , returning an interception for a touchdown in his NFL debut, but he tore the ACL in his left knee six games into his rookie season.

With Hughes coming off his injury, Holton Hill suspended for the first four games this year and Trae Waynes entering the final season of his contract, cornerback wouldn’t have been an indulgent selection. But the need up front, after a so-so first season under Cousins, was too glaring to ignore.

The only other time in the 13 drafts the Vikings have had with Spielman that they made an offensive lineman their first pick was 2012, when tackle Matt Kalil went to them at No. 4 overall. He made the Pro Bowl as a rookie, but his five-year tenure with the team was mixed at best. That was the first draft with Spielman as the final decision-maker. When he was vice president of player personnel before his promotion, Spielman shared authority with the head coach.

The Vikings have only used a first-round selection on an offensive lineman three times in the past 30 years: Kalil, Bryant McKinnie (2002) and Todd Steussie (1994). They were each picked for at least one Pro Bowl. Two of the three others taken in the first round in Vikings history, Randall McDaniel (1988) and Ron Yary (1968), are Pro Football Hall of Fame members.