Ministers of Comedy brings laughs and funding for Dixonville-Lincoln Memorial 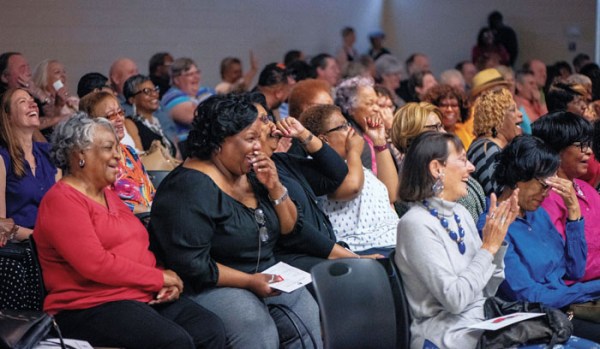 The audience enjoys the comedy at the 'Ministers (& Judges) of Comedy' show at the Salisbury Civic Center to support the Dixonville-Lincoln Memorial. Jon C. Lakey/Salisbury Post 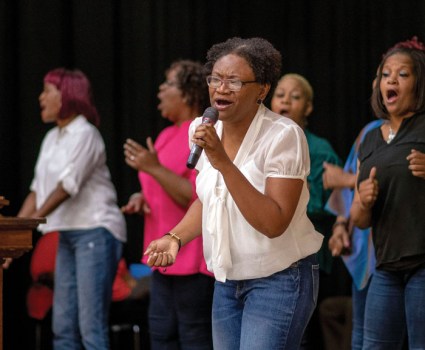 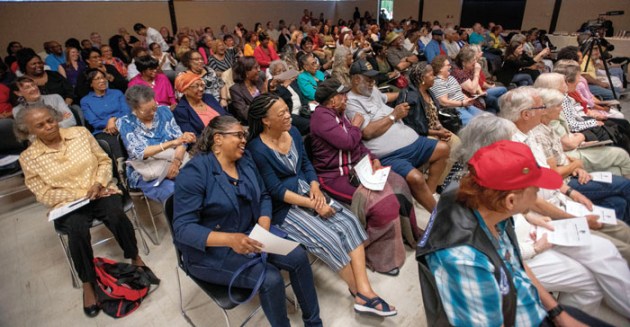 The audience laughs it up. Jon C. Lakey/Salisbury Post 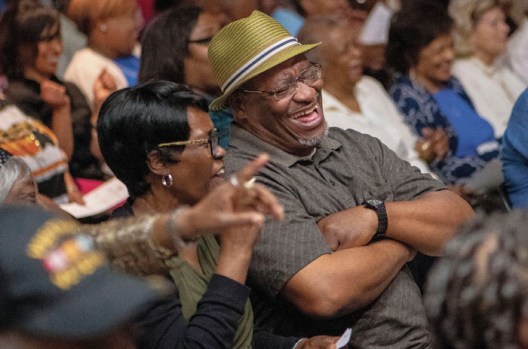 SALISBURY — Laughter filled the Salisbury Civic Center on Thursday for an evening of comedy told by Rowan County ministers as a part of the Dixonville-Lincoln Memorial fundraiser “Ministers (& Judges) of Comedy.”

The first of three phases of the Dixonville-Lincoln Memorial is being finished, and the money raised — about $3,200 — will go to complete the project that is expected to cost $25,000.

Emily Perry, chairwoman of the memorial task force, said the Dixonville cemetery has headstones dating from 1851 to the mid-1960s. Of the 1,000 people buried there, only half have been identified. In the cemetery, an estimated 500 African-Americans were buried without markers

Dixonville-Lincoln, or the east side of Salisbury, is where she grew up, and it’s a close-knit community, she said. Lincoln School was a focal point of the community where PTA meetings were generally standing-room-only. Education was important, although many of the students’ parents couldn’t read or write, Perry said.

Lincoln School has since closed and Dixonville Cemetery is a way for the community to remember.

David Whisenant, a reporter with WBTV of Charlotte and the emcee for the fundraiser, called Dixonville-Lincoln a gem for the community and said he has enjoyed seeing progress made in the cemetery.

The fundraiser, in its second year, kicked off with a return of Geoffrey Hoy, a member of St. John’s Lutheran Church. Hoy greeted the crowd of 300 saying he’s still part of a blue wave — a reference to his role as the Rowan County Democratic Party chairman. He held his hands in the air and waved them, donning blue gloves.

Claude Forehand, of First Baptist Church in Kannapolis, had laughter pouring out as he explained the enthusiasm and excitement black churchgoers feel when praising God. Forehand animatedly explained spiritually mature “shouts” — whether they are from an elderly man moving his body from the waist up or an older woman who appears to be searching for something in the dark. Then he showed those without spiritually mature shouts as he energetically danced around the stage. The audience roared.

Forehand told the audience that if you join a black Baptist church, you will lose weight.

Before exiting the stage, he added: “If you don’t have rhythm, that’s fine. Rhythm will find you.”

The Rev. Robert Kelly, of Moore’s Chapel A.M.E.Z. Church, commented on Forehand’s comedy performance by saying he was having too much fun.

Kelly started his set saying it’s hard being a pastor, and sometimes church members make it hard, receiving a holler from Forehand.

“Thank you, Dr. Forehand. I was hoping you would help me with my set,” Kelly responded.

Kelly spoke about Johnny, a child who attends his church, saying it’s fun having children in the church because they’re always going to say something interesting.

Kelly said one day at Sunday school, Johnny and his sister, Angie, were learning about the Ten Commandments. The teacher asked for one. Johnny looked at his sister and replied, “Thou shalt not kill.”

Kelly ended his set with a message to his Moore’s Chapel A.M.E. Zion Church.

“If I was funny, tell everyone,” Kelly said. “If I wasn’t funny, then what happens at the Civic Center …”

Perry said the show is a great way for the community to come out to have fun and fellowship. She expressed gratitude to those who attended and the handful of sponsors that helped reach the fundraising goal.