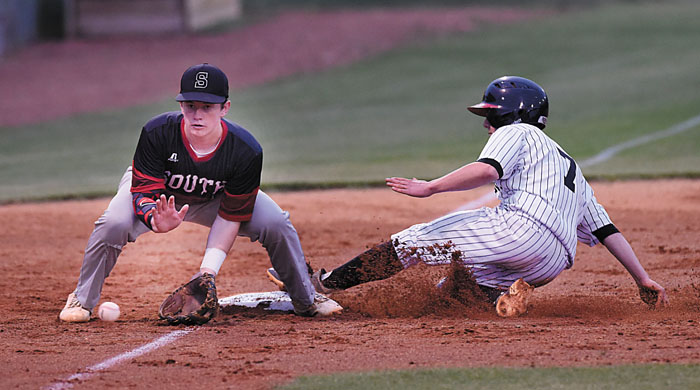 SALISBURY — The only problem Jack Fisher and the Salisbury baseball team had Thursday night was too much of a good thing.

In what was likely his final game at Robertson Stadium, the senior left-hander pitched the Hornets past South Rowan, 4-0, as the Central Carolina Conference regular season drew to a close.

“Being the last time I step onto this field, I was definitely pumped up for this one,” Fisher said, moments after he fired 5 2/3 innings of two-hit ball. “All of the seniors seem to bring more intensity.”

On a night when Salisbury (12-10, 10-8) recognized six graduating seniors, it broke a three-game skid, avenged Wednesday’s lethargic loss to South and secured a winning conference record. South (14-9, 11-7) had its six-game winning streak snapped.

“We’ve got a chance to be a good playoff team,” said Raiders’ coach Thad Chrismon. “We’ve just got to keep building. This was kind of out-of-character for us. We typically make some of these plays that we didn’t make tonight.”

Salisbury managed only three hits against losing pitcher Jarrid Nelson, the senior right-hander who has recorded six victories this season. He retired 10 of Salisbury’s first 11 batters and induced nine groundouts in five innings. He was charged with three earned runs.

“He started us off with a bunch of curveballs that ended up low and off the plate,” said SHS catcher Bo Rusher. “It was almost like a slider. We never really squared anything up against him.”

Fisher, meanwhile, had only moderate command of his fastball, change-up and curve. He fanned six of South’s first nine batters and finished with eight strikeouts before throwing his 110th and final pitch.

“I thought Jack pitched all right,” said fourth-year Hornets’ coach Mike Herndon. “I was really impressed with the way South Rowan swung the bat. They’d get two strikes, then fight pitches off and get his pitch count up. The were good at fouling balls off with two strikes.”

Fisher benefited from a misplaced bunt attempt by South’s Jack Weaver in the top of the third inning. With the game scoreless and base-runners at first and third with one away, Weaver fouled out to Rusher, who made a lunging catch on the right side of the plate.

“What an athletic play,” said Fisher. “Bo had to get up in full catcher’s gear, find the ball and make that catch. Still, it’s the kind of play we expect him to make.”

Herndon seemed grateful. “Thank you for that,” he said afterward. “That’s a play that every coach teaches. You still have to execute it.”

Salisbury finally solved Nelson and scored three runs in the last of the fourth. Rusher floated a one-out single into right field and Fisher followed with a hit-and-run ground ball through the vacated hole between first and second base. With two runners in scoring position, Nelson coaxed Blaine Shellhorn to swing through a dirt-covered third strike, but the ball eluded South catcher Drew Watkins, allowing Rusher to score the game’s first run. Parker Lippard’s two-out bloop single to right made it 2-0 and a third run crossed on an infield error.

The Hornets plated their final run an inning later, when Blake Clarke was hit by a pitch and scored on Rusher’s sac fly. Fisher exhausted his pitch count in the top of the sixth after South’s Drew Huffman and Bryson Bebber each reached on errors. Reliever Vance Honeycutt escaped the jam without throwing a pitch. Instead, he picked Bebber off first base to end the rally.

“Gotta give credit to (assistant) Coach Carson (Herndon) for that,” Fisher explained. “When he came out to switch pitchers, he told us we were going to get back in the dugout without even throwing a pitch. He’s the one that called it — and I guess it caught the runner off guard.”

Honeycutt pitched out of trouble in the seventh to earn his first save, but it was clearly Fisher who backboned the win.

“Tonight, every single pitch he had was on point,” Rusher said. “When you have three pitches you can throw for strikes, that makes you really effective. He was just locked in and ready to go.”

NOTES: Both teams open the CCC tournament Monday. It concludes Tuesday and Wednesday at South Rowan. Salisbury enters as the No. 6 seed and will play at Oak Grove. South will meet West Davidson in the Nos. 4-5 game.