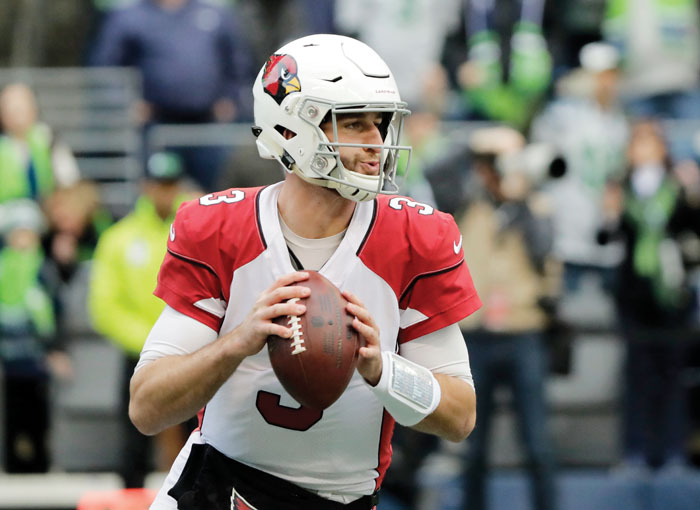 FILE - In this Dec. 30, 2018, file photo, Arizona Cardinals quarterback Josh Rosen drops back to pass against the Seattle Seahawks during the first half of an NFL football game in Seattle. Rosen, supplanted by Kyler Murray as the Cardinals’ quarterback of the future after only one season, has been traded to the Miami Dolphins in a deal that also involved two draft picks. (AP Photo/Ted S. Warren, File)

By STEVEN WINE AP Sports Writer
DAVIE, Fla. (AP) — Josh Rosen, supplanted by Kyler Murray as the Arizona Cardinals’ quarterback of the future after only one season, was traded Friday to the Miami Dolphins in a deal that also involved two draft picks.
The Cardinals used the No. 1 overall pick Thursday to draft Murray, the Heisman Trophy winner from Oklahoma. For Rosen they acquired from Miami a second-round choice this year — No. 62 overall — and a fifth-round pick in 2020.
Arizona used the 10th overall pick on Rosen last year, and the former UCLA star had a rocky rookie season. He finished 33rd in the 32-team NFL in passing rating, throwing for 2,278 yards and 11 touchdowns with 14 interceptions, and the Cardinals finished last in points and yards while going 3-13.
In Miami he’ll compete for playing time with well-traveled veteran Ryan Fitzpatrick, who signed in March after the Dolphins traded Ryan Tannehill to Tennessee.
The Rosen trade became final with the Dolphins on the clock to make their second-round pick, and it followed a day of speculation about a deal. Rosen wasn’t surprised — he quickly posted a photo of himself in a Dolphins uniform on Instagram.
“He was always a guy that has had a ton of talent,” Miami general manager Chris Grier said. “He’s a smart guy. He can throw it. What everyone always liked about him was how cerebral he was. It’s a young talented guy at a premium position.”
First-year coach Brian Flores will decide whether Fitzpatrick or Rosen should start this year, said Grier, who didn’t seem concerned about a potential quarterback controversy.
“Ryan Fitzpatrick has been great,” Grier said. “He’s got personality. He’s a character, a great leader. I think the two of them will be good in the room.”
Miami had been paring payroll and stockpiling 2020 draft picks as part of a rebuilding plan under first-year coach Brian Flores. If Rosen makes an unfavorable first impression with the Dolphins, they might still use their top pick on a QB next year.
Since 1983, Miami has drafted only one quarterback in the first round — Tannehill in 2012.
With a multitude of needs, the Dolphins took Clemson defensive tackle Christian Wilkins in the first round Thursday.
Before making the deal for Rosen, they traded down in the second round and continued to stockpile 2020 picks. As part of that move, they also sent their fourth-round pick to the New Orleans Saints for a sixth-round choice this year and a second-round pick next year.
Miami now has 10 picks in 2020, not including two possible compensatory choices.
___
More AP NFL: https://apnews.com/NFL and https://twitter.com/AP_NFL
___
Follow Steven Wine on Twitter: http://twitter.com/Steve_Wine.