Column: In the NFL, it always comes down to the bottom line 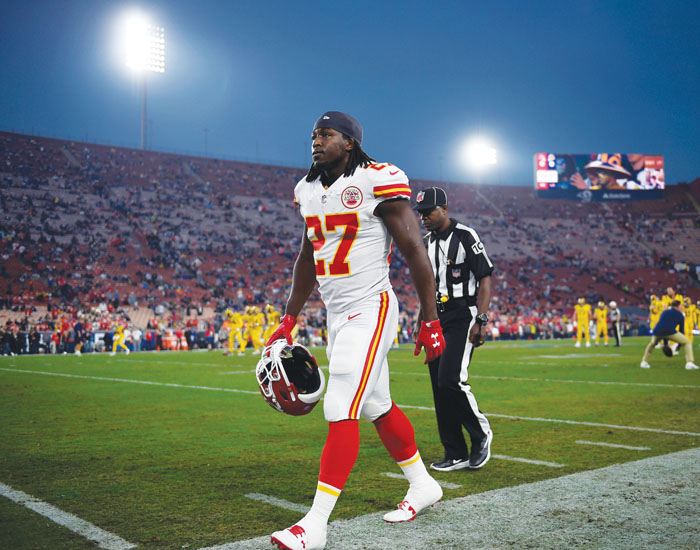 FILE - In this Nov. 19, 2018, file photo, Kansas City Chiefs running back Kareem Hunt walks on the sideline before an NFL football game against the Los Angeles Rams, in Los Angeles. Frank Clark will be making big bucks next season in the NFL. Kareem Hunt will get a shot at redemption. That video of Jeffery Simmons will be forgiven. So will Nick Bosa's tweets. Chances are, someone will find a way to employ Tyreek Hill. With the NFL _ and, really, everything in life _ it always comes down to the bottom line. And nothing's going to change until the fans say they've had enough, and actually mean it. (AP Photo/Kelvin Kuo, File)

By PAUL NEWBERRY AP Sports Columnist
Frank Clark will be making big bucks next season in the NFL.
Kareem Hunt gets a shot at redemption.
That video of Jeffery Simmons will be forgiven.
Ditto for Nick Bosa’s tweets.
Chances are, someone will find a way to employ Tyreek Hill.
With the NFL — and, really, everything in life — it always comes down to the bottom line. The owners are simply working the numbers, deducing that whatever baggage the aforementioned rogues bring to a franchise’s reputation are more than offset by their stellar ability on the playing field.
The Venn diagram goes something like this:
More wins lead to more fans.
More fans mean more dollars.
More dollars make owners even richer.
Rest assured, nothing’s going to change until those filling the seats and bolstering the TV ratings back up whatever disgust they may be feeling by actually abandoning their support of the NFL. And if you think that’s likely to happen, we’d love to hook you up with a Nigerian prince who’s holding millions of dollars in your name.
A quick recap of the league’s infamous offseason (so far):
— Looking to bolster a porous defense that cost them a chance to play in the Super Bowl, the Kansas City Chiefs worked out a trade and a new $105.5 million contract for pass rusher Clark. Never mind that he was kicked off his college team at Michigan after a domestic violence arrest in 2014. Or that, while with the Seattle Seahawks, he went on Twitter to taunt a female reporter over her story about domestic violence in sports, offering her a job cleaning his fish tank after she washed out as a journalist.
The Chiefs’ decision to trade for Clark drew additional scrutiny because …
— Hunt, the NFL’s top rusher in 2017, was released by Kansas City late last season when a hideous video surfaced that showed him shoving a woman and then kicking her while she was defenseless on the floor of a hotel hallway. Of course, Hunt has since received a second chance from the Cleveland Browns, though he’ll be suspended for the first eight games of the 2019 season. Citing his Christian faith but no doubt eager to build on the promise of a seven-win season, general manager John Dorsey said, “I see a lot of men of character who commit egregious acts. But at the end of the day, they learn from those acts, moved forward and became better people.”
Meanwhile, back in Kansas City …
— A local TV station aired graphic audio this week in which Hill and his fiance, Crystal Espinal, angrily discuss how their 3-year-old son was injured. Espinal said hill was “punching” the boy in the chest and using a belt on him for discipline, while Hill issued an obscene threat against Espinal. Hill has maintained his innocence, but the Chiefs barred the speedy receiver from all team-related activities while the investigation is ongoing. It’s also worth noting that Hill was kicked off his college team at Oklahoma State for a domestic violence arrest.
Moving on to the draft …
— Simmons was picked 19th overall by the Tennessee Titans, who shrugged off a video from 2016 that showed him striking a woman during a brawl that also involved his sister and mother. Simmons has apologized for the incident and had no troubles during his three years at Mississippi State. “I’m not perfect,” he said. “I made the mistake. I own up to it. I wasn’t raised like that, to strike a woman.”
Also on Day 1 of the draft …
— Bosa went to the San Francisco 49ers with the No. 2 pick after conceding that his agents deleted tweets in support of President Trump and critical of Colin Kaepernick, Beyonce and Marvel’s “Black Panther” movie. In a prescient response to his reasons for the social media scrubbing, Bosa said, “I had to. There is a chance I might end up in San Francisco.” There were also reports of Bosa liking multiple Instagram posts that featured racial and homophobic slurs. Eager to improve an anemic pass rush, the 49ers shrugged off any concerns about Bosa’s presence in the locker room or in a left-leaning city with a large gay population. “I was a little insensitive,” Bosa said. “I’m just ready to move forward from that, put it in the past, and bring the faithful some wins.”
Ahh, wins.
In the end, that generally makes everything OK.
Sure, some 49ers fans were critical of Bosa’s selection, and it was impossible to ignore the significance of him joining Kaepernick’s former team. During the 2016 season, the quarterback began kneeling during the national anthem to protest racial injustice in America, a stance that effectively cost him his playing career. Doing the math, the owners decided his undeniable playing skills were outweighed by his extremely vocal critics, a group that included Bosa and stretched all the way to the White House.
Let’s also remember the case of former Baltimore Ravens running back Ray Rice, whose career rightfully ended over a gruesome video of him knocking out his fiance in an elevator. But, let’s face it, the unwillingness of any other team to offer up a second chance probably had more to do with him coming off an injury-plagued season in which he rushed for only 660 yards than a noble stance against domestic violence. As with Kaepernick, the numbers simply didn’t work in Rice’s favor.
So, here’s the challenge for anyone out there who may be stewing over the NFL’s personnel decisions.
If this really bothers you, find something else to do on Sundays this fall.
A picnic. A movie. A bicycle ride. There are plenty of options.
If you decide to stick with the NFL, there’s no chance of anything changing.
That’s the bottom line.
___
Paul Newberry is a sports columnist for The Associated Press. Write to him at pnewberry@ap.org or at www.twitter.com/pnewberry1963 His work can be found at https://apnews.com/search/paul%20newberry
___
For more AP NFL: https://apnews.com/NFL and https://twitter.com/AP_NFL