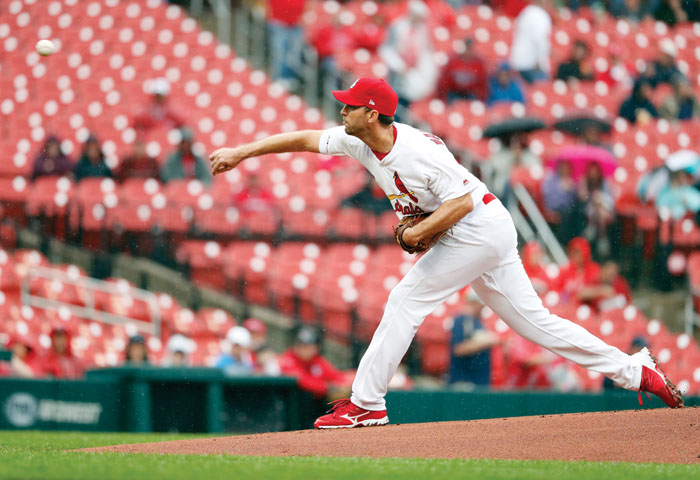 ST. LOUIS (AP) — Adam Wainwright was warm enough on a cool day, allowing one run in six innings for his 150th career victory, and the St. Louis Cardinals beat the Milwaukee Brewers 5-2 on Wednesday to complete a three-game sweep.

Last year’s MVP, Christian Yelich, had most of the day off but still had a chance to rescue the Brewers. He came up as a pinch-hitter with the bases loaded in the ninth inning, but Jordan Hicks struck him out to pick up his seventh save in eight chances.

Wainwright (2-2) matched his season low in runs allowed, and it was his first quality start in a game with a starting temperature of 60 degrees or cooler since May 27, 2017.

Marcell Ozuna and Yadier Molina homered for the Cardinals as part of a four-run fourth.

Paddack and relievers Trey Wingenter and Kirby Yates combined on a two-hitter.

The 23-year-old Paddack (1-1), who lowered his ERA from 2.25 to 1.67, was brilliant in his fifth big league start. He got into and out of a bases-loaded jam in the first, and after that it was lights out.

The Blue Jays were shut out for the first time since opening day, when they lost 2-0 to Detroit in 10 innings.

Pomeranz (1-2) allowed two hits, both singles, in a season-high six innings. He walked two and struck out five to win for the first time since Aug. 10, 2018, with Boston.

ST. PETERSBURG, Fla. (AP) — Tampa Bay ace Blake Snell lasted one out into the fourth inning in his return from a broken right fourth toe as Kansas City cruised to victory.

The 2018 AL Cy Young Award winner, who hurt the toe attempting to move a decorative display in his bathroom on April 14, allowed three runs, five hits, two walks and struck out three during a 65-pitch outing.

The left-hander (2-2) had given up one run and nine hits over 19 innings in three starts prior to the injury.

Martin Prado’s two-out homer for Miami tied the game in the top of the eighth, but the Indians responded by scoring four times to snap a three-game losing streak.

Ramirez hit a two-out homer in the first and had an RBI single in the third. His eighth-inning double added two runs and capped Cleveland’s big inning.

Nick Wittgren (1-0) struck out two in the eighth.

Stephen Piscotty singled with one out off Chris Martin (1-1) and then stole second base. After Khris Davis flied out, Pinder looped a soft hit into right field. Piscotty slid into home plate to beat a wide throw home from Nomar Mazara as the A’s dugout emptied, mobbing Pinder near first base.

DENVER (AP) — Raimel Tapia had two doubles and drove in three runs to back a solid outing from German Marquez, and Colorado beat Washington.

Charlie Blackmon homered and Trevor Story extended his hitting streak to 13 games with a double and a triple. Nolan Arenado had three RBIs, David Dahl had three hits and Wade Davis picked up his third save. The Rockies have won eight of their last 10.

Juan Soto homered for the Nationals, who have yet to win more than two games in a row this season.

Marte extended Arizona’s lead to 5-1 with a solo shot in the fifth inning and drove a three-run shot, his sixth homer this season, into the left-field bleachers in the eighth.

Arizona’s nine-game winning streak at PNC Park is its longest in an opponent’s stadium. The Diamondbacks have not lost in Pittsburgh since May 29, 2017.

Acuna scored easily when Puig misplayed Nick Markakis’s line drive single to right, allowing it to skip under his glove and roll to the wall for a two-base error.

Mike Soroka (1-1), in his second start of the season and seventh of his career, tied his career high with seven strikeouts while allowing five hits and one run with three walks in 5 2/3 innings.

A.J. Minter pitched a perfect ninth for his third save.

Tanner Roark (1-1) got through five innings, allowing six hits and two runs with three walks and four strikeouts. He also hit a batter.

Baltimore won two of three to capture its first series since April 1-3 in Toronto. The two straight victories are the Orioles’ most since a four-game run that began at Yankee Stadium on March 30.

Wilkerson’s second-chance solo shot off Ervin Santana (0-2) put the Orioles up 4-1 in the fourth. Earlier in the at-bat, Wilkerson walked to first base after apparently being hit by a pitch, but a replay proved otherwise.

Means (3-2) marked his 26th birthday with a career-high six strikeouts. The lefty allowed one run and four hits.

Mychal Givens worked the final two innings for his first save.