Tour is better equipped for new round of Tigermania 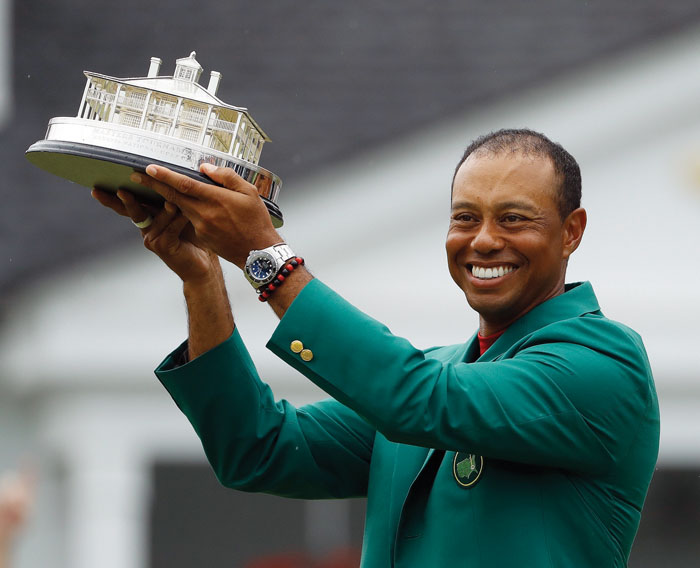 The phone started ringing in the days after Tiger Woods won the Masters.

This was in Minnesota, though it could have been most any city that hosts a PGA Tour event. His 15th major, and most improbable considering what Woods had to overcome, set off a fresh round of Tigermania.

“I got called by two affiliates, either the Monday or Tuesday after the Masters, and they wanted to come over with a camera crew,” said Peter Mele, tournament director of the new 3M Open the first week in July.

Rumors were swirling that Woods might return to the Twin Cities, which already has a loaded field with Brooks Koepka and Phil Mickelson, Jason Day and Bryon DeChambeau. Mele could only tell them that Woods has a history of playing two weeks before a major — the British Open in this case — so the timing was favorable and the tournament was cautiously optimistic.

“I wouldn’t have had those calls had he not won the Masters,” Mele said Tuesday.

The buzz Woods generated from winning a fifth green jacket is as big as ever.

His schedule figures to be as small as ever.

Still to be determined is whether that presents the problem of a generation ago when the PGA Tour schedule was largely divided between the tournaments Woods played and those he didn’t.

“The haves and have-nots,” said Mele, who experienced both sides of it as the longtime tournament director of the tour’s New York event. “When he was struggling with his health, it was more of a curiosity if he played. Now with the buzz after the Masters … it’s the way it used to be back in the day.”

Even when he was young and healthy, Woods never played more than 21 times in a PGA Tour season. He played 18 times on the PGA Tour last year, adding a few tournaments for which he was not eligible at the start of the year.

Woods had said even before this year started he would not be playing as much. He is 43. Good health is no longer taken for granted.

Kym Hougham remembers what it was like during the first wave of Tigermania. He became tournament director of the John Deere Classic the year after Woods made his pro debut (and never returned). Hougham later ran the Wells Fargo Championship until last year, which Woods missed only three times when healthy.

A decade ago, offer a tournament director Woods and no one else from the top 10 in the world, or eight of the top 10 minus Woods, and it was an obvious choice.

“Back in those days, most would have taken Tiger,” Hougham said. “I’m not sure that’s the feeling of every tournament because every tournament has a different personality. Most title sponsors would have done that because that’s when the media shows up, and it’s on the front page of the sports page.

“If you had your choice, you’d take Tiger.”

The Valspar Championship discovered his value a year ago when Woods added the Florida event to his schedule and the gallery at Innisbrook stood a dozen deep behind some tee boxes. And that was six months before he returned to winning.

Any tournament would love to have Woods, especially now that his Masters moments — the cheers, the chants, the emotion — are so fresh and won’t be forgotten.

But that doesn’t mean it’s Tiger or bust.

Even if the new Minnesota event doesn’t get Woods, it already has an All-Star lineup.

The Travelers Championship never had much of a chance of getting him because the tournament Woods hosted in Washington was the following week. It created its own identity through building strong relationships with young stars and since has attracted some of the best — Rory McIlroy, Jordan Spieth, Justin Thomas — with Koepka, Day and Francesco Molinari expected this year.

The stock question for every tournament — “Is Tiger playing?” — does not seem as make-or-break as it once did.

“That happened a lot more in ‘07 and ‘08,” said Nathan Grube, in his 14th year as tournament director of The Travelers. “When the field started getting stronger and stronger, we stopped getting that question.”

Woods missed so much time — partially in 2010, 2011 and 2014, effectively all of 2016 and 2017 — that it allowed younger players to emerge. Golf was in a good spot before Woods returned from a fourth back surgery last year, and Woods took it to another level that only he can.

Eight players have been No. 1 since Woods was last there in 2013. Seven players — five younger than Woods — have won multiple majors in the 11 years Woods went without a major.

“What happened two weeks ago changes the dynamic,” Hougham said. “He’s back on top. But with the change in schedule, the fields are deeper. The tour did a nice job building up a lot of these kids. … And they’ve earned their way up there. They were not in Tiger’s shadow, but their own sunlight. And the sun is bright enough now. I don’t think Tiger is going to overshadow them.”