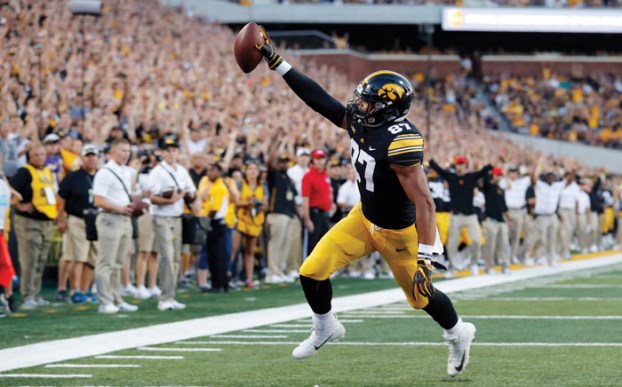 FILE - In this Sept. 15, 2018, file photo, Iowa tight end Noah Fant scores on a 5-yard touchdown pass during the first half of an NCAA college football game against Northern Iowa, in Iowa City, Iowa. Fant is a possible pick in the 2019 NFL Draft. (AP Photo/Charlie Neibergall, File) 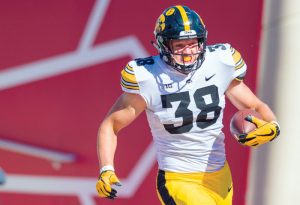 FILE – In this Oct. 13, 2018, file photo, Iowa tight end T.J. Hockenson (38) rushes the ball into the end zone to score during the second half of an NCAA college football game against Indiana, in Bloomington, Ind. Hockenson is a possible pick in the 2019 NFL Draft. (AP Photo/Doug McSchooler, File)

Not long ago, drafting a tight end in the first round was taboo for NFL teams. On Thursday night, two might go very high — and they come from the same school.

T.J. Hockenson and Noah Fant of Iowa are projected to go early, and it’s not just because they are versatile, talented players. Or that the Hawkeyes have turned into a college mecca for the position: 10 of them in the pros since 2000, including Dallas Clark, who helped the Colts win a Super Bowl, and George Kittle, who set records for the position with the 49ers last year.

With the emphasis on more passing and a shift toward more open offenses, the tight end spot has become a critical component of NFL attacks. Every team is eager to find the next Rob Gronkowski or Travis Kelce or Zach Ertz. And colleges are putting more emphasis on using the tight end as a weapon, not as a glorified tackle.

“The tight end is the eraser for the quarterback,” Fant said Wednesday as 21 potential first-rounders spoke at Nissan Stadium, home of the Tennessee Titans and within a short walk across a bridge over the Cumberland River to where the draft will occur. “That’s where being a dynamic tight end comes into play.”

Added Hockenson: “It’s become a valued position. A three-down tight end who can run past defenders when needed and block when needed is special.”

So, apparently, are these two. Hockenson has been rated on some draft prognostications as one of the top 10 prospects in this crop. Fant hasn’t been far behind.

Neither likely will go in the top half-dozen selections, which figure to be dominated by defensive players such as Nick Bosa of Ohio State, Quinnen Williams of Alabama, Josh Allen of Kentucky and Devin White of LSU. Both are expected to be gone in the top 20 or so.

But pro teams have changed their tunes most recently. Two years ago, three tight ends were taken in the opening round: O.J. Howard by Tampa at 19, Evan Engram by the Giants at 23 and David Njoku at 29 by Cleveland.

Now come Hockenson and Fant, who say they have no clue where they will land.

“I just feel we’re ready,” Hockenson said. “This entire process has been flattering and it has been cool to learn how people see the game differently. But as for where, don’t know.”

Fant also shrugged when asked where he might wind up, though when the subject of replacing Gronk in New England was broached, he said: “Playing at New England, you couldn’t ask for a better situation.”

Fant, who came into the 2018 college season as the higher-rated prospect — and still might be with many teams — believes he benefited from playing with another standout tight end. He certainly showed a knack for the end zone with 19 career touchdowns.

Hockenson was no slouch, of course, and had nine TDs. He also handled more of the blocking role for the Hawkeyes than did Fant, though many NFL personnel people believe both will be versatile and reliable at either chore.

Both became tight ends in middle school and took to the position quickly. Hockenson grew up in Chariton, Iowa, while Fant is from Omaha, Nebraska. When they got to Iowa City, they were behind Kittle, then each of them excelled when Kittle headed to the 49ers.

Kittle has told them to “block out all the noise” and just be themselves during the draft process — and when they arrive in the NFL. Both would do exceptionally well to emulate Kittle’s numbers with the Niners: 88 receptions, 1,377 yards and five TDs last season, playing mostly with backup passers.

“What George did (at Iowa) was pretty special,” Fant said. “George has taken it to another level in the NFL. He made for big shoes to fill.”

Perhaps. But remember, Kittle was a fifth-round selection in the 2017 draft. By that round this weekend, Hockenson and Fant likely will be ensconced in their new city, learning the playbook.