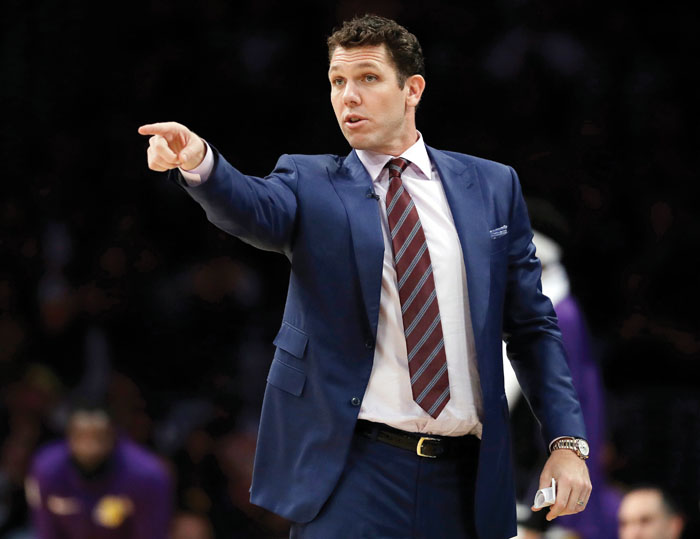 AP Photo/Marcio Jose Sanchez, File ... In this photo from last Oct. 20, Los Angeles Lakers head coach Luke Walton directs his team during an NBA game against the Houston Rockets in Los Angeles. Walton became coach of the Sacramento Kings, just a day after parting ways with the Lakers, but now is facing a sexual assault lawsuit.

LOS ANGELES (AP) — New Sacramento Kings coach Luke Walton has been accused of sexual assault in a lawsuit by a former sports reporter.

“I thought he was going to rape me,” Kelli Tennant said at a news conference Tuesday, one day after TMZ reported that she was suing Walton.

Tennant alleges that Walton attacked her when he was an assistant coach for the Golden State Warriors, which was from 2014 to 2016.

Tennant said Walton, whom she considered to be a longtime friend and mentor, had written the foreword to a 2014 book she had written. She went to give him a copy while he stayed at a hotel in Santa Monica during a Warriors road trip to Los Angeles.

“Out of nowhere, he got on top of me and pinned me down to the bed and held my arms down with all of his weight while he kissed my neck and my face and my chest,” Tennant said, adding that when she asked him to get off, “he laughed at me.”

Tennant said Walton relented and she started to leave the room when he grabbed her again and kissed her ears and neck. She said he finally stopped, laughed and said “good to see you” before she left the room.

Tennant said she confided with people at the time but never filed charges.

“I was scared,” she said. “I felt coming forward would jeopardize every aspect of my life.”

“The accuser is an opportunist, not a victim, and her claim is not credible,” Baute said in a statement. “We intend to prove this in a courtroom.”

Tennant said she was afraid of Walton and it took her time “to be able to muster up the courage” to go public.

“When someone assaults you and you think you’re going to be raped, coming forward is a scary thing. I have spent years now trying to deal with this,” she said.

Her attorney, Garo Mardirossian, said because years had passed, he believed it would be difficult to file a report now with police and put together a criminal case.

“Police departments are not very likely to get involved in a case this old at this time,” Mardirossian said.

Tennant said Walton continued to harass her after he became coach of the Lakers and she was working as a broadcaster in Los Angeles for Spectrum SportsNet and SportsNet LA. She now does a wellness podcast.

Mardirossian accused the NBA of having a sexist culture.

“Aided by their fame, money and power, and motivated by a culture that tolerates misogynistic gender bias, too many men in professional basketball inappropriately abuse women,” he said in a statement issued before the news conference.

Walton was dismissed by the Lakers this month and hired by the Kings. The Kings said they are aware of the report and gathering information. The team had no other comment.

The Lakers said the allegation was never reported to the team before or during Walton’s employment.

“If it had been, we would have immediately commenced an investigation and notified the NBA,” the Lakers said, declining further comment.