East Rowan cousins find the key to a great prom 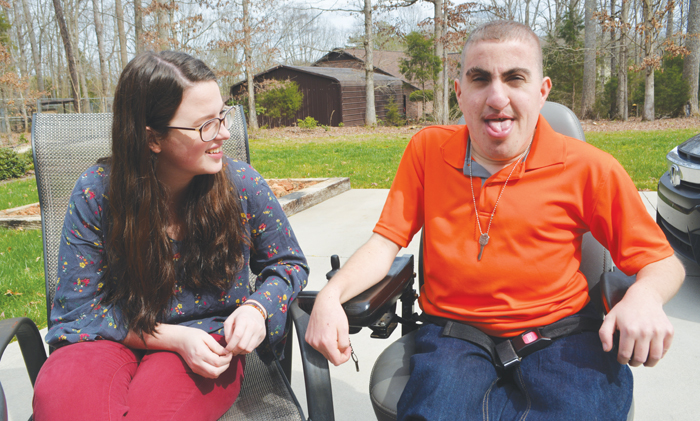 Cousins Mattie McDonald and Bradley Hill are going to the East Rowan prom together on May 4. Since Bradley is home-schooled, he wouldn’t otherwise have a chance to go.

GRANITE QUARRY — Prom season in Rowan County is in full swing, and it’s a sure bet no one is more excited than Bradley Hill.

Bradley is a senior who is home-schooled. He also has spina bifida.

His cousin Mattison McDonald is a junior at East Rowan High School, and she invited him to go to the prom with her.

“I’ve been thinking about it for several years,” Mattie says. “I knew I was going to prom, but I couldn’t see myself going with anybody else but Bradley.”

Bradley’s mother and her husband, Sandy and Chris Holshouser, are members of Open Door Baptist Church, but Bradley is a member of Liberty Methodist, where he attends with his grandparents, Brenda and Jerry Hill.

His other grandparents are Russell and Barbara Lambert, Kay Holshouser, and Pam Barneycastle, and his father and his wife are Scott and Miranda Hill.

Mattie decided to do her “promposal” after services one day at Liberty Methodist. The East Rowan Honors Chorus, to which Mattie belongs, sang there Feb. 20.

“I made a poster,” Mattie says. “I was trying to think of something cute to say.”

She came up with a poster that read, “You’re the key to a great prom.” 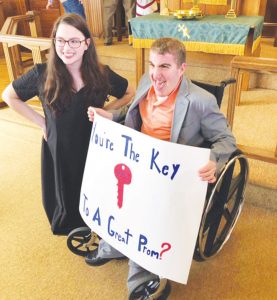 Mattie made a sign to invite Bradley to the prom.

She gave Bradley a key on a beaded chain that he now wears around his neck. He’s always loved keys, his mom says.

He also loves music and dancing.

“Everybody that I’ve told, their hearts just melt,” Sandy Holshouser says. “You can tell he is loved.”

On prom night, which is May 4, the Holshousers will follow Mattie and Bradley in their own vehicle. Dwight Morrison, owner of Exclusive Limousine in Concord, has donated a limo. The Holshousers will help Bradley get in and out of the restaurant and the prom venue.

Mattie decided on dinner at City Tavern. Then it’s off to the Event Center, where Bradley and Mattie will dance the night away.

Bradley typically gets around in a scooter, but he also has a wheelchair with light-up wheels — a sure hit on the dance floor.

Mattie promised Bradley they’ll go to Wendy’s after the prom to get a Frosty, one of his favorite treats.

Besides being in the Honors Chorus, Mattie works at the East Rowan YMCA. She hopes to go to Western Carolina University to become a middle school English teacher. She recently joined the FFA parliamentary procedure team, and she works at Morgan Elementary School’s after-school program. She also teaches swimming and is a lifeguard.

She admits she has a chaotic schedule but seems to love every minute.

Lots of folks are making sure Bradley and Mattie have a special night. Her best friend is Morgan Hesse, and Morgan’s mother, Amanda, bought her prom dress. The girls wore their dresses to the Carson High prom, attending with a group of friends. Amanda is the East YMCA’s chief operating officer and sees Mattie frequently at work and home.

“We had gone shopping, and my daughter also found her dress at the same time, so I just bought them,” Amanda says. “I look at her as if she’s one of my children. She’s got a big personality.”

Mattie says her prom dress reminds her a lot of Belle’s dress from “Beauty and the Beast.” She plans to wear her long, brunette hair down. The staff of That Hair Pair and The Hair Station are both donating services to Bradley and Mattie for pre-prom pampering.

Sandy Holshouser, who works at That Hair Pair, is also a hairdresser at Autumn Care and teaches aesthetics and cosmetology at Rowan-Cabarrus Community College. She says she knew before he was born that Bradley would have spina bifida.

“We both had faith that everything would be OK. He has been a blessing, not only to us but everyone else. He gets so excited when he goes to church on Sundays. He wants to dress his best for the ladies. He’s made a lot of friends.”

“He’s been through 100 surgeries, and he still has an outlook on life that glows,” his mom says.

Mattie just turned 17 and Bradley turned 18 on April 27. They’ve known each other all their lives.

“I remember being at Morgan Elementary and Bradley being there,” Mattie says.

Back in September, Mattie asked her mother, Vickie Adams, about taking Bradley to the prom. Adams thought it was a great idea.

“I’m excited for both of them,” Adams says. “She’s always loved Bradley.”

She recalls a family photo of the two as infants.

“Mattie was barely sitting up and Bradley was beside her,” she says. “They were looking at each other and grinning.”