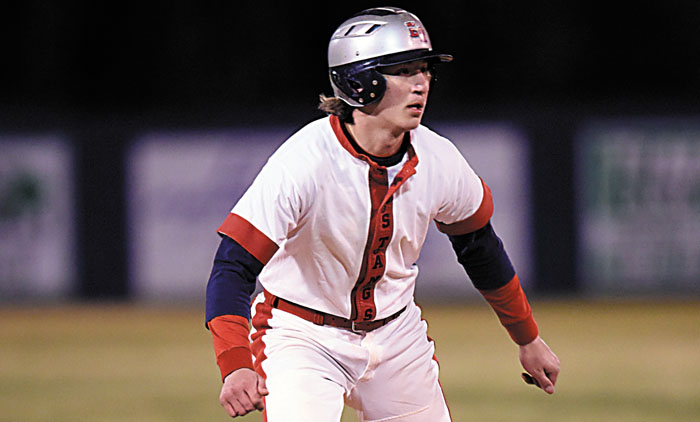 Wayne Hinshaw FILE/for the Salisbury Post... East Rowan’s Wayne Mize smacked a three-run homer in the first inning to spark the Mustangs to a 6-2 win over Hickory Ridge in the championship game of an Easter tournament in Granite Quarry on Tuesday night.

GRANITE QUARRY — East Rowan’s baseball team is about to run out of April, but not April fuel.

The Mustangs scraped together nine more hits Tuesday night and claimed their own spring break classic with a 6-2 championship-game victory over Hickory Ridge.

“It seemed like everybody was on time,” acting head coach Brett Hatley said, shortly after East (14-9) won the tournament for the third straight year. “We had the timely hits that we hadn’t been getting earlier. A lot of our guys are look like they’re seeing the ball better. They’re just getting comfortable in the box.”

East entered the tourney with an unspectacular .217 team batting average, but collected 30 hits and swept past Forest Hills, West Stanly and the hard-hitting Ragin’ Bulls (15-7). “(Hickory Ridge) was a really good team,” said Bryson Wagner, the senior who pitched seven scoreless innings in the tournament. “They all could hit the ball. We just had to be better.”

East received towering home runs from Wayne Mize and Jake Hunter and scored its first five runs with nobody out. Mize opened the scoring in the top of the first inning when he drove a 2-1 curveball from southpaw Adam Wilkerson over the left-field fence for a three-run homer.

“I was trying to keep the same approach I’ve had all year — use the middle of the field,” Mize said. “He just left me a hanging curveball and I love them. Right away, we had our confidence up.”

Wilkerson responded with five consecutive strikeouts, but the damage was done. Charlie Klingler, who led off the first with a line drive single that Hickory Ridge center-fielder Alex Kniffin appeared to trap, scored on Mize’s blast along with Wagner, who feathered a base hit into left.

“That probably could have been a two-run homer,” said Hickory Ridge coach Branden Knapp. “And we might be having a different conversation right now.”

The Bulls reached winning pitcher Corbin Durham for single runs in the first and third innings. The junior right-hander yielded Ick Cirino’s sacrifice fly and later Jose Vargas’ RBI-single to center as the lead whittled to 3-2. Durham struck out three and walked none in four-plus innings, but he surrendered eight hits and plunked three batters with pitched balls.

“Corbin pitched really well, actually,” said Klingler, East’s sturdy catcher. “He kept us in this ballgame. Our guys are going to show their best stuff every night — and that’s what he did.”

“I love Durham,” Hatley said. “He’s got a live arm and his breaking ball comes out of the same tunnel as his fastball, which moves late. That’s why his breaking ball is so good when it’s on. You’re up there seeing fastball, but you don’t realize until you swing that’s it’s not a fastball. Yeah, he gave up eight hits, but that’s one of the best-hitting teams we’ve seen all year.”

If Hatley loved Durham, he must have been infatuated with Wagner, who pitched three innings of hitless relief and earned a save. Wagner retired the first eight Bulls batters he faced before walking the bases loaded with two out in the last of the seventh.

“I felt really good until I got out of my groove with two outs,” said Wagner, the winning pitcher in Saturday’s 10-0 win against Forest Hills. “I guess I was trying to throw too hard, trying to get that last out.”

He finally prevailed by going against Hatley’s intuition. Wagner got his fourth strikeout when he froze Hickory Ridge’s Graham Brown with a game-ending, 2-2 curveball. “Coach called for an outside fastball,” Wagner said. “But the last three curveballs I had thrown were all in the dirt. I figured they wouldn’t expect another one, so I shook him off and threw a perfect pitch.”

East padded its lead in the top of the fourth, when Hunter belted a first-pitch leadoff home run and Klingler drew a bases-loaded walk. The inning ended with a bizarre double play — the second of three turned by the Bulls — when Vargas, HR’s shortstop, dropped Wagner’s soft popup with the bags full and one away. A wacky series of throws and misses ensued before both courtesy runner Griffin Warden and Jake Holshouser were tagged out in rundowns between third base and home plate.

“The ump didn’t call it an infield fly rule,” said Knapp, “and East Rowan ran itself into a double play.”

Hatley’s beef was that Vargas did catch the ball, then dropped it deliberately with three baserunners retreating.

“That guy’s a really good shortstop,” he said. “He doesn’t drop that ball unless he wants to.”

When it ended, East accepted the championship trophy from Hightower’s wife, Addie.

“Everyone competed. Everyone had a good tournament,” said Klingler. “We were strong on the mound and strong at the plate. That’s what it took.”

NOTES: Mize’s home run was his third of the spring. … Hunter, who pitched a middle-game shutout against West Stanly, cracked his second round-tripper. Hatley has nicknamed him, “The Landlord.” … Vargas went 3-for-3 with a walk to lead Hickory Ridge. … East hopes to host a non-league game against North Davidson on Saturday afternoon.