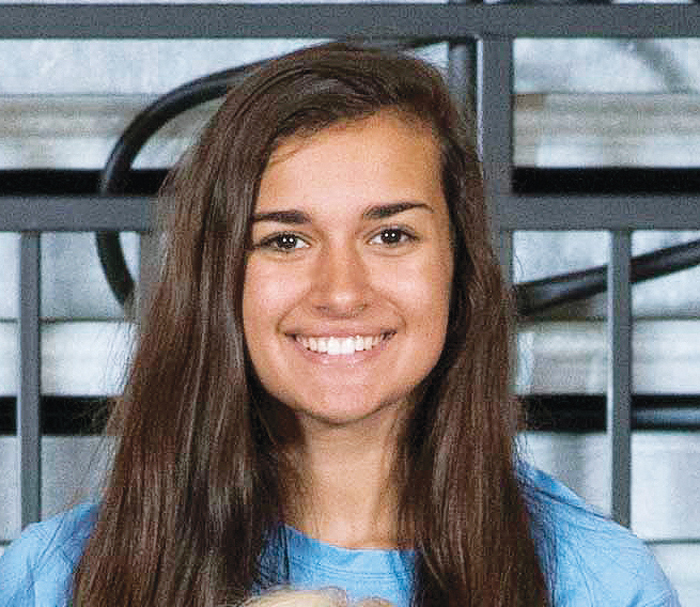 Puglia was new to the school, and he had to be thinking something along the lines of, “Wait a minute, what have I stumbled into? If they’re all like this, we’ll win every game.”

“I remember being completely blown away by Lejla,” Puglia said. “But then she broke the news to me that she wouldn’t be playing for me at West. She had an opportunity too good to pass up, a chance to train with Bosnia’s national team. That experience and the exposure, she got — she had to go. As much as we missed her, she did the right thing.”

On February 5, 2018, Mehmedovic was one of 28 girls who reported for training with Bosnia-Herzogovina’s 19U team. She was born in America, but her parents are natives of Bosnia. She logged unforgettable experiences playing on a national and international level. Her confidence soared.

“At first, I wasn’t sure that I’d match up at all at that level,” Mehmedovic said. “But I did pretty well. I fit in, and I started scoring some goals.”

Mehmedovic also has soaked up high-level soccer experience from playing with and against the state’s best with the Charlotte Soccer Academy.

“I started with soccer when I was 4 years old, I never let go of it, I and never even considered any other sports,” Mehmedovic said.

After missing that junior season, Mehmedovic was eager to rejoin West’s squad as a senior. The midfielder has added an extra gear from when she was a sophomore and she has elevated the program. She has 17 goals and four assists. West (6-7-2, 3-4 North Piedmont Conference) has been surprisingly competitive and has been outscored 37-36.

“We won two games last year, but Lejla still wanted to play for us, and that says good things about her and how much West soccer means to her,” Puglia said. “Refs are constantly coming over to the sideline and asking me, ‘Who in the world is that girl?’ That tells you she’s pretty special. She’s the best player I’ve ever coached and besides being talented, she’s been a great teammate. She’s always worried about me, reminding me to smile, and she worries about her teammates, but never about herself. She’s always looking to pass. She doesn’t mind leading this team, but she doesn’t want it to ever be a one-person show.”

Mehmedovic  scored both West goals in a 2-2 tie with a good Central Davidson team. She’s enjoyed a five-goal game and a four-goal game.

“I was away from high school soccer last year, but I’m proud of how much better West has become,” Mehmedovic said.  “Sometimes there are two defenders on me, so I see my role, not so much as a scorer, but in bringing everyone on our team together. The first time we played South Iredell ( tied for first in the NPC with Carson), we lost 7-1, but we lost to them recently, 2-0. We still made a few mistakes, but we definitely are improving.”

Mehmedovic shouldn’t have any trouble adapting to the college game. Catawba head coach Nick Brown is a former West Rowan coach. Last fall, he led Catawba to its first postseason action in a decade.

“Growing up, I always liked Catawba and my dad loved Catawba,” Mehmedovic said. “Catawba was the first school that ever contacted me, and I never had any reason to look at bigger schools. Catawba is what I always wanted.”

Mehmedovic will be joined at Catawba by West Rowan teammate Ryley Corriher, the Falcons’ talented goalkeeper.

“She’s an amazing goalkeeper,” Mehmedovic said. “I’ve played with some good ones, and she’s one of the best.”

While soccer has always been the center of Mehmedovic’s universe, Corriher developed a passion for the sport, only after trying almost everything else.

“I tumbled, I cheered a long time, I played some softball and basketball, and I played volleyball in high school,” Corriher said.

Corriher was thrown into the fire as a goalkeeper in middle school and discovered she had an aptitude for it. She had good height, good hands and a lot of athletic ability.

She’s also vocal and  a worker, first to arrive, last to leave, someone who always wants extra reps.

“That goalkeeper is the most important person on the field, and I’m not just saying that because that was the position I played,” Puglia said. “It’s a position that brings some glory, but it’s also a position that bears a lot of the weight for a loss. Ryley has the right mentality. She brings a load of confidence to the back of our defense. She’s an anchor.”

“My sophomore year we had some of those games where I was making 30 saves and getting all beat up,” Corriher said. “This is more fun. I’ve tried to be a good leader for this team. I try to be nice, to be respectful, to have a good attitude.”

She made 15 saves in a 2-1 win against North Iredell and made 15 more in a 7-0 loss to Carson, which is tied for first with South Iredell.

“Ryley kept us in games last year when we didn’t have Lejla,” Puglia said. “Now she’s helping us win games.”

Corriher used to underestimate her ability.

“I honestly didn’t think about college soccer until I was a senior,” Corriher said. “But Coach Brown contacted me at the start of this season and he told me he thought I could do it. He invited me to come to a Catawba I.D. camp with Lejla, and that’s when Catawba made an offer. I always thought I was hopelessly behind because I’ve never played club soccer, but Catawba has shown a lot of belief in me.”

Corriher said one of the things she’s looking forward to most at Catawba is being Mehmedovic’s teammate.

“Even at a camp like Catawba’s camp, where everyone was good, Lejla was a sight to see,” Corriher said. “She’s going to shine in college. I’ve seen people trip her and she just smiles and keeps going. That ball is part of her. She’s always in control.”